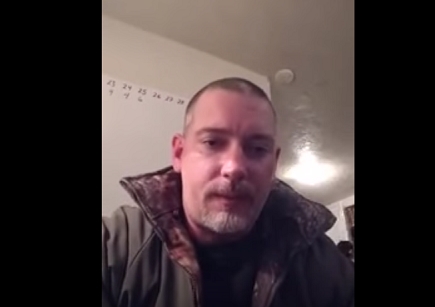 [ Editor’s update: Gordon and I had double posted on this story, so I am moving my intro to his comments below. The witness above who was stopped and arrested in the first car refutes the allegations made in this early reporting of an execution with his hands up in the air.

This is what I would classify as a credible witness, as he is telling what he knows with no hype, and he is already in carry on mode with the fight.

Finicum took off from the first road block after at least one person got out and was not fired upon, and then crashed into a snowbank while trying to run the backup roadblock. With two women in the car, one an 18-year-old girl, that was an irresponsible thing to do.

But Finicum left a big clue as reported by the NY Times Today, “I’m not going to end up in prison,” said Mr. Finicum, 54, who often appeared at news conferences wearing a broad cowboy hat on his head and a sidearm on his hip. “I would rather die than be caged. And I’ve lived a good life.”

He exited the car and charged the officers and was shot then… from the witnesses released and reported above. This video witness man was at a distance himself, but I suspect we will have plenty of video camera evidence of both stops, as that is routine in these situations where both sides want proof of what happened.

The rest of those stopped are alive, to tell their stories. Those with warrants were arrested and the others released. I am sure we will be hearing more about this in the next few days. For my two cents, these folks should have been aware that some sort of arrest could be expected and should have had a game plan to move the dispute into the courts, as will happen now.

I was surprised the Feds were letting this situation drag out. One of the reasons could be that they were waiting for the leaders to get overconfident and get sloppy. If the Feds wanted to avoid a legal case on the main theme, they will often tap phones and collect evidence for a conspiracy case, which can be a serious case, and nab a group at one time.

Any kind of shooting served neither the government’s position nor those arrested, injured or killed. The Jade Helm crew will crawl out from under their rocks and try to ride this pony, hoping we all will forget about their JH hoax, where Santilli was one of the main promoters. We are still waiting for video tours of the underground Walmart tunnels.

Here we have public relations genius, Mr. Santilli, with a few choice words to share with us.

Entering stage left next will be Alex “the Prison Planet – Jade Helm” Jones, to milk this for all he can get. We are still looking for the thousands of Russian commandos moving up the Mississippi River. At the end of the day, this is going to be a long drawn out legal case. The activists should be well represented... Jim W. Dean ]

…and now, for Gordon’s input

With wild stories from “activist” types and armchair government bashers backing the liars and fabricationists around the Bundy scamsters, we offer this version, short and sweet.

There is no reason whatsoever for police to have shot only one person.  The idea that it was an execution of one person is childish and insane.

The versions out there, the “hands in the air” crap is just that, simply not to be taken seriously.  Shame on anyone who is so desperate to pretend to believe an obvious lie just to seem “cool” and “acceptable” to the Jade Helm hoaxter trailer trash.