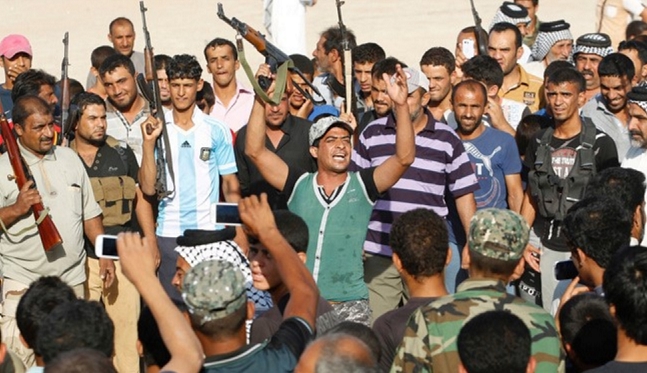 VIDEO: Iraq Defense Ministry Released Footage Seized From ISIS Militants
[ Editor’s note: The big deal in this is down the page, what seems like a big move to shift training to the Egyptians and away from guess who? That would remove the need for US troop trainers, something I had expected the Iraqis did because they were getting funding from the US, which gave them more to steal, an unfortunate part of the culture in that part of the world.
As for technical assistance, Iran and Russia can supply all that is needed, the Russians having shown how their stuff works, and a good bet they would not be supplying ISIL secretly while helping the Iraqis.
The US and West will find themselves in a tough spot trying to sell the bogeyman hype of “growing Russian influence” in the area when the result of that is wiping out the Western terrorism scourge… Jim W. Dean ]
_____________
– First published … January 28,  2016 –
Iraqi forces carried out successful offensives against ISIS (Daesh) Takfiri terrorists on Wednesday, liberating more strategic areas in the western province of Anbar.

Forces with Iraq’s anti-terrorism unit regained control of the area of Abu Tayban as well as parts of the village of al-Zankoura in the northwest of Ramadi, the provincial capital of Anbar, according to the Arabic-language al-Baghdadia News. The report added that the forces are advancing toward the city of Hit to liberate it from the control of Daesh terrorists.

Additionally, Commander of the Iraqi Federal Police Force Lieutenant General Raed Shaker Jawdat said at least 35 Daesh militants were killed in Husaybah city, east of Ramadi, adding that the Iraqi forces retook a number of houses and buildings in the city that were used by terrorists.

Also on Wednesday, dozens of Daesh terrorists were killed in airstrikes by the Iraqi air force in the city of Hawijah, southwest of Kirkuk, the capital of the province with the same name.

Iraqi Defense Ministry spokesman, Nasir Nouri, said an agreement on military cooperation between Baghdad and Cairo will be announced as soon as Iraqi experts finish examining the Egyptian proposals for providing the Iraqi army with weapons and military equipment as well as training.

Egypt has expressed readiness to provide all possible facilities to strengthen the military relations with Iraq, the Iraqi official stated. He also said that the Egyptian side was willing to open all the military training centers to the Iraqi forces, adding that the Iraqi Defense Ministry will determine the number of the trainees.

Violence has plagued the northern and western parts of Iraq ever since Daesh terrorists launched an offensive in June 2014, and took control of parts of the Iraqi territory.

Army soldiers and fighters from allied Popular Mobilization Units are currently battling to win back militant-held regions in joint operations.