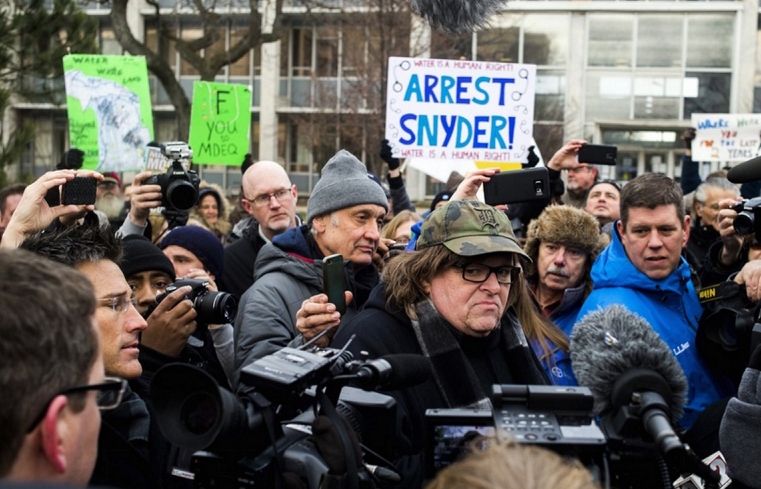 The people of Flint have a message for the American public, and it may not be what you would expect. The city is calling for nothing less than revolt, a complete overhaul of the Michigan government — and instead of sending bottled water, they want you to join them.

Joining residents’ call for revolt is Flint resident and film maker Michael Moore as well as the NAACP and ACLU. Several lawsuits have already been filed against state officials, including one on Wednesday that asserts the state is continuing to violate the Safe Drinking Water Act and intervention from the court is necessary.

“In a failed attempt to save a few bucks,” Michael J. Steinberg, legal director of the ACLU of Michigan said in a statement, “state-appointed officials poisoned the drinking water of an important American city, causing permanent damage to an entire generation of its children. The people of Flint cannot trust the state of Michigan to fix this man-made disaster and that is why court oversight is critically needed.”

In an article for Common Dreams, Moore responded to those who have been contacting him looking for ways to help.

“Unfortunately, the honest answer to your offer of help is, sadly, you can’t,” Moore wrote. “You can’t help.”

“The reason you can’t help is that you cannot reverse the irreversible brain damage that has been inflicted upon every single child in Flint. The damage is permanent. There is no medicine you can send, no doctor or scientist who has any way to undo the harm done to thousands of babies, toddlers and children (not to mention their parents). They are ruined for life, and someone needs to tell you the truth about that. They will, forever, suffer from various neurological impediments, their IQs will be lowered by at least 20 points, they will not do as well in school and, by the time they reach adolescence, they will exhibit various behavioral problems that will land a number of them in trouble, and some of them in jail.”

Instead, Moore explained that what they really need is a “nonviolent army of people who are willing to stand up for this nation, and go to bat for the forgotten of Flint.”

“A crime against humanity has been committed against the people of Flint, making them refugees in their own homes. Tell me honestly: if you were living in Flint right now, and you learned that your children had been drinking lead-filled water for two years, and then you discovered that the Governor knew this and the state lied about it — tell me, just how fast would your head be spinning?” Moore asked.

The problem with Flint’s water began in April 2014, when the city stopped receiving its supplies from Detroit, instead shifting to water from the Flint River, which is known to have a high corrosive salt content. Corrosive salts in the water damaged the pipes, which contain lead, causing that material to be released into the water, and contaminating it.In October, the state changed the city’s drinking water source back from the polluted Flint River to the Detroit water system, but warned that the water is still not safe.

Drinking water in many city homes has been found to contain lead levels high enough to be declared “toxic waste” by the Environmental Protection Agency, and the residents of the city were not told until they had been using it for over six months.

The effects of lead poisoning are irreversible.