In my two previous articles I explored the cause of evil, Where Does Evil Come From, and its psychological nature, The Nature Of Evil – Political Ponerology. In this article, I would like to explore the toolbox that is used by psychopaths to keep their system running. Quite simply you can sum it up in two words.

They lie. About everything.

The challenge for these people is to get away with it. Be the trickster. Fool and deceive “normal” people who they consider to be lesser than themselves and basically idiots.
Values that the majority of the population hold as sacred – honesty, decency, kindness, compassion, generosity, they regard as weaknesses. Things to be exploited to the full and to their advantage.

They lie. They cheat. They steal. And regard you as the fool for falling for it. When you do fall for it, in their minds this is a win. Goldman Sachs for instance refers to their own clients as “muppets” to be exploited. If they get caught out it’s a case of, “oh well lost that one” and they immediately start planning the next attack.

All that matters is “I win,” and each win makes them feel more powerful. And they are always keeping score. If they help you in any way, know that it comes at a very heavy price. They will extract by hook or by crook three times what they gave you in the first place, with interest. Wealth is their god, power is their reward.

Take a look at the last 15 years alone. Look at the game plan. 9/11, WMDs in Iraq, Libya, Syria, Ukraine. False Flag attacks. Gold price rigging, currency price rigging, Libor rate-rigging, the mortgage crash. All based on lies and still the majority of people who do not search out Independent media sources not controlled by psychopathic corporations, actually still believe their lies. Sheldon Adelson does not like journalists to the point where he is now buying out newspapers who in turn will now print his version of the truth.

Propaganda in the news media is legal. Think about that. Truthful, honest, and accurate reporting no longer exists. Their biggest enemy is an honest journalist. Look what they did to Serena Shim. 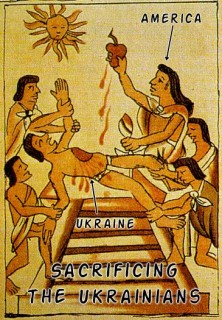 My two favorite comedy sketches are Marie and Psaki at the US State Department when they are asked questions by the media. During the war in Ukraine in 2014, I had a blast. Tears, tears I tell you running down my cheeks with laughter. Putin’s missile for one. The “Russians have invaded Ukraine” for another. If you call miles and miles of trucks carrying food, medicine, and clothing for a population who was suffering from the devastation of grad rocket shelling an invasion, then I suppose they had a point!

But nothing was ever said about the body snatchers, the organ harvesting going on amongst the Kyiv junta, or the helicopters flying in and out to destinations unknown. Big business that!

Add in a few more lies. Mercury laced Vaccines. Monsanto’s GMOs creators of Agent Orange. Geoengineered floods and droughts. Virus outbreaks in politically expedient places. The war on drugs- CIA cocaine running and heroin production in Afghanistan. Pro-abortion and selling fetus baby parts. Common Core education, one size fits all guaranteed to create a grade six mentality. All engineered lies. All are designed for social engineering in order to accomplish depopulation and a dumbed-down society that is easier to control.
It was Zigi Brzezinski who said: it is easier to kill a million people than to control a million people. Think about that. Kill than to control.

Apparently, there are too many of us and in any case, they cannot roll out Tesla technologies that are free and abundant because there is no money in it and we will no longer be slaves to the past industrial era production line. As J.P.Morgan said of the Tesla Tower, “you can’t put a meter on it.”

There will be no need for a large workforce, not with computer technology, 3d printing etc, so they have got to get rid of us. And who is the fall guy? I will leave that for you to decide. There are so many contenders for that position at the moment. Pick your poison.

As usual, they solve this problem in a selfish and destructive manner. That’s what happens when psychopaths who are not the most creative people at the best of times, steal from a genius like Tesla and fund his inventions by bumping off a very rich man and taking over his highly lucrative empire. This while at the same time, oh please get this, they “keep him alive” as a recluse in a hotel room with a hired actress playing his devoted wife to boot! And the whole world falls for it.

Needless to say, anyone who doesn’t and makes the slightest attempt to point out the very large elephants in the room, gets bumped off. Sometimes in the most dramatic and newsworthy manner. Feed the frenzy. Michael Hastings.

I win. Death is the name of the game. It has become a fashion statement. The media loves it so does the advertising industry.

Surely we are more intelligent than this? If in the last 70 years all the time, energy, and money that has been spent on destructive and harmful policies had instead been spent on education we could already be living on planet paradise. But that is a win-win situation. There are no slaves in it. There are no haves and have-nots. There is no social class. Psychopaths don’t like that. Instead, people like Buffet have been waging another war, as he put it, between the rich and the poor and according to him, the rich are winning. People like Buffet regard the middle class as poor.

One hundred years ago most women had anything from 5 to 15 children. Many of them spent the greater part of their married lives pregnant. Baby factories. Out of those 5-15 children, many died in childhood from what we regard today as easily preventable diseases. And then there is war, there is always war. Which is basically theft and greed in the most barbaric manner possible sold as yet another lie. People like Henry Kissinger regard military men as dumb animals to be used for political and monetary gain.

One hundred years later we have advanced health care and birth control which instead of being used for the benefit of the human race is now being used by Medical Insurance companies as one of the biggest money-spinners on the stock exchange, and to create an illness as a political weapon. Here… have a virus. While Killing our own children instead of teaching basic family planning and birth control has become internationally accepted.

There is no energy crisis. There is so much oil we cannot use it fast enough. There is no water shortage. Food shortage or any kind of shortage at all. Shortages are engineered. They are a lie. And along with the lie you are being blamed for all these problems and what is more, you are being made to pay for it. It is all part of social engineering.

Ask the Irish about the potato feminine. One way to get large sectors of the farming population off the land was to leave the country and sail across the Atlantic where they were needed as cheap labor to build railroads.

They dish out below-standard education and then blame you for being stupid and uneducated. There is no excuse anymore. The internet has opened up a whole new field to educate the whole planet at little to no cost. All we need to do is use it. Do you live in a high humidity area where there is a water shortage? Get on the internet and find out how to make an atmospheric water generator. Wall-Mart is shutting down all over the place? Get together with a group of people and invest in 3D printing.

They declare a “war on drugs,” and then supply those same drugs to the population. Then they blame you for being a drug addict and put you in jail, corporate for-profit prisons. Your self-esteem is destroyed and whole societies lose their self-respect.

The same goes for pornography. I had the unfortunate experience of switching the TV on one day and was confronted by a group therapy class on how to brown eye fists f*ck each other with rubber gloves, ky jelly, and all. And they were all so dedicated and serious about it as if they were preparing for the Olympics or something. You gotta be kidding me?

The media purposely exposes children to this rubbish where the unacceptable is made to be acceptable. And most of these people will end up having to have a colostomy, which will suit Big Pharma fine. More money in their pocket. Anything to steal your wealth.

The words “family planning” seem to have disappeared out of the narrative to be replaced by abortion, yet another barbaric solution that fits in well with the psychopathic “I win” ideology. Now they have got you to murder your own children and it is legal. They got away with it yet again!

This brings me back to Jamestown in 1609, fine young cannibals, who should have been returned to England and put into a place of safety and rehabilitation. Instead, this virus, no different from Ebola or the latest … Zika, (where do they come up with these names?) infected a very young nation at the most vulnerable point in its development. And now character paths like Clinton, Kagan, and Bush run for office steered by psychopaths in the background like John Halpern, Adelson, Koch, and Bain.

The mentally deranged are running the asylum and you are about to vote them into power again. Which character path will you put into the White House? Perhaps before you decide that you need to find out who their controlling psychopath is. Because if you got to take a look at his desk, you might find the altar to his god.
There is an antidote. Stop playing their game. If you do not feed the monster it will not thrive. Call them out for what they are. Liars, cheats, thieves and murderers. Then create your own reality, one based on truth, justice, and social responsibility.

Katherine Frisk is a freelance writer, political commentator and author of: Jesus Was A Palestinian.