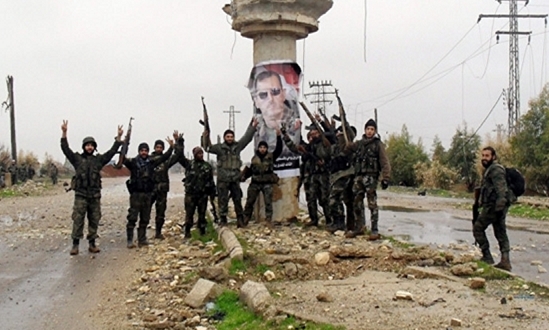 TEHRAN (FNA)- Informed military sources underlined that the Syrian army’s recent victory in the strategic city of Sheikh Meskeen in the Northern part of Dara’a province has opened a new front against Israel.

Last Tuesday, the Syrian army alongside the popular forces, backed up by the Russian and Syrian fighter jets, drove the militant groups back from the entire city of Sheikh Meskeen after weeks of clashes.

“The seizing back of Sheikh Meskeen can result in the ultimate defeat of the foreign terrorists in Southern Damascus and the Resistance force’s domination over the Southern borders of Syria that will, in turn, pave the way for opening a new front against the Zionist regime,” informed military sources said today.

The sources reiterated that seizure of Sheikh Meskeen will help cut off the terrorists’ supply lines on several directions and enhance security in surrounding areas of the International Damascus-Dara’a Highway.

In relevant remarks earlier this week, the Syrian Armed Forces’ General Command underscored that winning back of Sheikh Meskeen has strengthened the pro-government forces’ combat morale in their battle against terrorism and extremism, saying a new era of Army attacks and victories has just started.

“Establishing control over the city, located in the northern countryside of Dara’a province, has dealt a major blow to the terrorist groups and their foreign supporters,” the General Command said in a statement.

“The importance of this achievement comes from the strategic location of Sheikh Meskeen city as it links Dara’a city and the Northern, Eastern and Western territories of Dara’a, in addition to the fact that it overlooks a number of strategic points and hills,” the statement added.

The army further said that the Russian and Syrian fighter jets, in a series of join operations, targeted the militant groups in various districts of the city and paved the way for the rapid advances of the pro-government force.