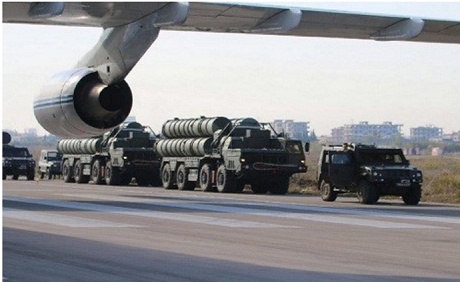 Anyone who has read the history of the Israeli-Palestinian conflict will be familiar with the term “facts on the ground.” Hence doing your utmost to establish an on-the-ground situation which is tangibly in your favour as opposed to waiting for some abstract plan or idea to be implemented.

One is frequently reminded of this process when evaluating the Russian campaign, and what appears to be Moscow’s general strategy in Syria.

Here is a major power which is ostensibly open to negotiating an end to the Syrian war but is showing no let-up in its bombing of the various armed groups arrayed against its client regime in Damascus (the Russian press regularly reports on the number of sorties carried out, last weekend they claimed 169 sorties destroyed 484 targets, all of which were described as “terrorist”). And the Russians have brought about tangible progress.

Solid facts on the ground are rapidly being established in the run-up to these negotiations. Which have already been delayed for almost a week now. And they say as much. Russia’s Foreign Minister Sergei Lavrov, for instance, recently lauded the intervention, saying that Russian air power has “really helped to turn around the situation in the country, helped towards reducing the territory controlled by the terrorists.”

His assessment certainly isn’t exaggerated: Russian air power has enabled the Syrian Army, and its militia allies, to achieve two very notable victories over the course of just the last week. In Latakia Province (home to the major Russian air base in Syria) they successfully recaptured the last major town their opponents occupied, Rabia, on January 24.

Two days later another Syrian offensive backed by heavy air strikes pried the strategically-important town of Sheikh Miskeen in the southern Syrian province of Deraa from opposition forces such as the US-backed Southern Front group (the most significant opposition group in Syria’s south). A clear-cut example of Russia’s earnest efforts to eliminate any tenable alternative to Assad ahead of talks.

Victories like these have given a boost to the morale of forces fighting on the regime’s side in Syria. They are also important victories for the consolidation of the regime’s home-base. Russia’s ruthless pounding of Assad’s enemies and its targeting of their leaderships will likely hinder any attempt by these groups to mount any protracted campaigns against Damascus or the central areas controlled by the regime for at least the foreseeable future.

These facts on the ground have come in the recent months and were built up to in the last four months throughout which Russia has been bombing Syria. Before then the regime had been losing ground, most notably in its humiliating losses of most of Idlib Province to the Islamist Jaish al-Fatah group last May.

Russia’s assistance has enabled the regime to once again go on the offensive and reverse some of these losses. This coupled with continued Iranian aid, which reportedly amounts to billions of dollars a year, indicates that the regime certainly has a fighting chance to continue surviving and enduring thanks mainly to these two powers.

Moscow and Tehran are to represent Damascus’s side in the Geneva negotiations aimed at bringing about an end to the war. Provided Russia gets to keep a client regime in Damascus it would likely agree to some transition process that enables that regime to retain these key urban areas to the west which Russia has helped Assad consolidate control over.

Russia sees this as being in both its strategic and security interests since it would preserve a friendly client in an important part of the world and also serve as a bulwark against Islamist terrorist attacks in Russia, which many Russians believe will be the result of a power vacuum that would result if Assad’s regime were to lose this bloody war.
Something they are not willing to let happen anytime soon.

Paul Iddon is a Rudaw reporter based in Erbil, Kurdistan Region.

The Russian Foreign Ministry has repeated its firm-held opposition to armed Islamist groups like Ahrar al-Sham and Jaish al-Islam participating in the Syrian peace talks in Geneva.

Russia’s Foreign Ministry Spokesperson Maria Zakharova told Russia’s TASS news agency that, “Our position of principle is that it is impossible to include terrorist organizations [in the talks]. We are sticking to it.”

“Terrorist organizations should not participate in the negotiations. If we talk about the fight against terrorism, it should be built on common principles without double standards and without dividing terrorists in ‘good’ and ‘bad’,” she went on to reason.

Saudi Arabia insists that such groups should be represented under the banner of the High Negotiations Committee, a bloc of opposition entities, many of whom are Islamist, which it established last December in an effort to unify the various armed groups fighting the Syrian regime of President Bashar al-Assad.

Russia has been bombing such groups as part of its efforts to bolster Assad’s regime. Jaish al-Islam has a foothold near the Syrian capital Damascus and has been backed by Saudi Arabia. Ahrar al-Sham was part of a coalition group which successfully managed to takeover most of Syria’s northwestern Idlib province, including its provincial capital. Russia killed the leader of Jaish al-Islam, Zahran Alloush, in an air strike last December 25.