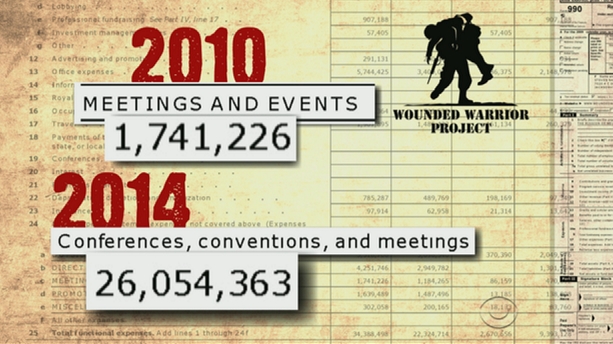 Editor’s note:  Former employees silence in mob like reign of terror, critics fear for not just legal retaliation for telling the truth but broad intimidation tactics.  VT editor’s have, out of stupidity, given to WWP.  Most embarrassing of all is seeing the WWP tee shirts on the markdown rack at military exchanges here and overseas.  A humiliation for our veterans.

Where is the money is going?

In its commercials, Wounded Warrior Project appeals to the American public’s generosity, and it works. In 2014 alone the group received more than $300 million in donations.

“Their mission is to honor and empower wounded warriors, but what the public doesn’t see is how they spend their money,” said Army Staff Sergeant Erick Millette.

Millette came home from Iraq in 2006 with a bronze star and a purple heart — along with a traumatic brain injury and PTSD.

Initially, he admired the charity’s work, and participated in its programs. He took a job as a public speaker with Wounded Warrior Project in 2013. But after two years, he quit.

“You’re using our injuries, our darkest days, our hardships, to make money. So you can have these big parties,” he told CBS News.

“Let’s get a Mexican mariachi band in there, let’s get maracas made with [the] WWP logo, put them on every staff member’s desk. Let’s get it catered and have a big old party,” he described.

CBS News spoke to more than 40 former employees who described a charity where spending was out of control.

Two of those former employees were so fearful of retaliation they asked that their faces not to be shown on camera.