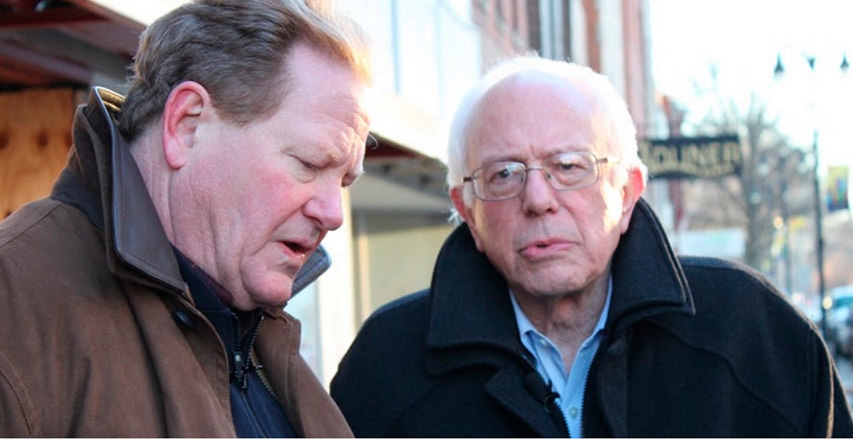 Democratic presidential candidates Hillary Clinton and Bernie Sanders are locked in a dead heat at the Iowa Caucus, with both candidates in a virtual tie as the votes are counted.
Senator Bernie Sanders spoke with RT’s Ed Schultz about how he became a serious contender for the Democratic presidential nomination from being 40 points behind in the polls, and how his “terribly radical” ideas reflect the will of the American people.
The two men met in Marshalltown, Iowa on Sunday to discuss the issues that have defined the campaign so far, from college tuition and trade agreements to establishment politics and former Secretary of State Hillary Clinton’s “damn emails,” and whether the dark-horse candidate thinks he can win.

Sanders: I’ll tell you something: We started this campaign ‒ as you recall ‒ at like 40 or 50 points behind Hillary Clinton…

Sanders: And the last polls have us about even. I think there are a lot of reasons. I think that we are… we’re talking about the reality of the American economy, a middle class which is disappearing, people working longer hours for lower wages, almost all new income and wealth going to the top 1 percent. And in terms of young people –

Schultz: But do you think that that tuition theme that you’ve had is…

Schultz:… because that’s the economic component in all of this. And they’ll turn out for that if they –

Sanders: I think they will. I think they will. Look, in the year 2016, a college degree in many respects is what a high school degree was 40, 50 years ago. Our kids need it to get a decent job. I talk to kids all over this state ‒ they are deeply in debt. Talked to a kid just two days ago, he is $60,000 in debt after two years of college. That’s insane.

Schultz: Another issue, Senator, we’re 25 miles from Newton, Iowa, where Maytag – the Maytag repairman – used to be. He’s in Mexico now.

Schultz: Those people went across the street to work at the wind plant, and they’re making half of what they used to make. I mean, is that in Iowa? I mean, isn’t it about jobs?

Sanders: I talk about it every day. And, you know, you and I know that the media does not like talking about trade, right?

Schultz: Yeah. Well, I mean, this is right in the middle of the country. And they get it?

Sanders: Oh, people get it. Absolutely they get it! I speak about it almost every speech. Look, we have lost 60,000 factories since 2001 – 60,000, millions of jobs ‒ not all of it attributable to trade, but a lot of it. Of course people get it, and they know that it’s part of the race to the bottom, it’s why the jobs ‒ just the point you made ‒ they lost good-paying jobs. Maybe they got another job, half the wages.

Schultz: If you win Iowa and New Hampshire, is it a game-changer?

Sanders: Oh, God, yes. Absolutely. I mean, I think… Look, when we began this campaign, we were a fringe campaign and Hillary Clinton was the inevitable candidate, right? That is changing, and it’s changing all over the country. We have support not only here in Iowa and New Hampshire, but in state after state we’re doing really well.

Schultz: … Does that word bother you?

Sanders: Well… you’re right. This is the irony. Every issue we talk about: creating jobs, raising the minimum wage, pay equity for women, making sure that the young people can go to college tuition-free at public colleges and universities, climate change, all of these issues are issues that the American people believe in! Meanwhile, you’ve got a Congress [saying], “Oh, these are terribly radical ideas!” You know what – the American people do want to ask the wealthy and the powerful to start paying their fair share of taxes.

Sanders: Oh, yeah… They do. The point that we make, over and over again, is that I can’t do it, no president can do it alone. That’s why this title, if you like, the subtext of this whole campaign is a political revolution: No one can do it alone, we need to do it together.

Schultz: We were in a grocery store earlier today, and I asked the guy who he was [planning to caucus] with, and he says,“Well, it’s Bernie because he hasn’t changed over the years. He’s talking about the same stuff today that he did 30 years ago.”

Sanders: For better or worse, that is true!

Schultz: Does that play into the trust issue?

Sanders: I think it does. Look, Secretary Clinton, you know, has “evolved” on many issues. And I think people want somebody who they know they can trust, who has been consistent on issues regarding the well-being of working families, and I think I’m that candidate.

Schultz: I know you don’t care about the “damn emails,” but the FBI does.

At this point, an unknown man interrupts to ask Sanders a question.

Sanders: Excuse me. Excuse me! I’m talking to him. You know, that’s not very nice.

Schultz: All right, final point: Are you having fun?

Sanders: I love, you know, it is very nice to…you know… This is a beautiful state, and I very much have enjoyed getting to know the people. We have been meeting with, we’ve had meetings now with close to 70,000 people have come out. How’s that?

Schultz: Is it, now why would it be an upset if you won?

Sanders: I mean, when you start 40 points behind, I think that is an upset.

Democratic presidential candidates Hillary Clinton and Bernie Sanders are locked in a dead heat at the Iowa Caucus, with both candidates in a virtual tie as the votes are counted.

For Clinton supporters, the tight race with Sanders will be a disappointment. Her campaign spent nearly a year building a massive get-out-the-vote operation in Iowa.

In remarks to her supporters, Clinton welcomed a “contest of ideas” with Sanders.

“It is rare we have the opportunity we do now, to have a contest of ideas,” she said. “To think hard about what the Democratic Party stands for. I am a progressive who get things done for people.”

“I stand here tonight, breathing a big sigh of relief – thank you Iowa,” added Clinton, who in 2008 lost the Iowa primary to current President Barack Obama.

The self-declared democratic socialist from Vermont, Senator Sanders, has drawn a big, youthful crowd across the state.

“We will struggle tonight if the voter turnout is low. That’s a fact,” Sanders told volunteers and supporters ahead of the caucuses, according to the Associated Press.