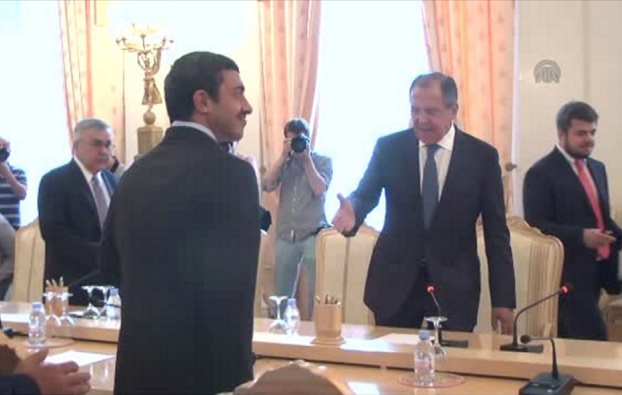 ABU DHABI, TASS/. Russia’s Foreign Minister Sergey Lavrov is to meet the leadership of the United Arab Emirates (UAE) on Tuesday to discuss the situation in the region, the situation in Syria and on the oil market. Lavrov will be received by Mohammed bin Zayed bin Sultan Al Nahyan, the Crown Prince of Abu Dhabi and will hold talks with UAE Foreign Minister Abdullah bin Zayed bin Sultan Al Nahyan.

The indirect talks on Syria that started in Geneva last weekend will certainly be on the agenda of Lavrov meeting in UAE, considering that that Russia and UAE are working within the Group to support Syria. So far the developments at the talks in Geneva can be described in one word – confusion. The opposition formed in Riyadh, which claims its exclusivity, jeopardizes prospects for consultations.

There a risk that the Geneva-3 conference which is now starting to take shape may repeat the fate of the conference in Montreux (January 2014), when the conflicting parties failed to come to any agreement. However, it seems there is no compromise among the so-called Supreme Negotiating Committee (WCP).

They have failed to form a united delegation of opposition. It does not include Kurds and opponents of Syrian President Bashar al-Assad. Instead, representatives of the Jaish al-Islam terrorist group are to come to Geneva. Moscow stresses that there must be no place for terrorists not only in Geneva, but also in general to the negotiating table.

“We have always said that for us it is a terrorist organization. We believe that they should not be part of the delegation,” – Deputy Foreign Minister Gennady Gatilov said. Moscow urges not to miss a real chance for peace, and stresses that now it is an important turning point. The continuation of the Syrian conflict is advantageous only for the terrorists who are absolutely not interested in political reforms, their goal is the caliphate from Pakistan to Portugal.

The triple terrorist attack arranged by the Islamic state in the suburbs of Damascus has become another confirmation for that. According to Sergei Lavrov, the actions of the Russian air and space forces really helped to change the situation in Syria, to ensure the narrowing of the area controlled by terrorists. “As a result, at the same time it has become much more clearer what is happening, it became clear who is fighting terrorists, and who is acting as their accomplices, trying to use them for their own selfish purposes unilateral, – Lavrov said.

The situation in Syria, in particular, affects the price of oil. The goal is to bring the market out of “the state of influenza”, according to the Russian Foreign Ministry. It has been proposed to hold a meeting between member countries of OPEC and other oil producers. The consultations can focus on the countries’ cutting their oil production by up to 5% each.

Russian Energy Minister Alexander Novak said he is ready to participate in joint negotiations with the oil producing countries, both members and non-members of OPEC, if they are held. According to Russia’s Foreign Ministry, in Abu Dhabi the parties will discuss the situation on the global energy market.

In particular, the task is to reduce volatility and to ensure fair prices of hydrocarbons which would in its turn ensure a sustainable balance between supply and demand. Bilateral and regional issues Russia’s Foreign Ministry pays attention to cooperation within the framework of the ministerial strategic dialogue Russia – Cooperation Council for the Arab States of the Gulf.

The next meeting in this format is planned in Moscow this spring. After the talks in the UAE Sergei Lavrov will travel to Oman. “In close cooperation with the UAE and Oman an updated version of the Russian concept of collective security in the Persian Gulf will be considered, taking into account changes in the region, such as reaching agreement on the Iranian nuclear program and a significant increase in the terrorist threat”, – the Russian ministry said.