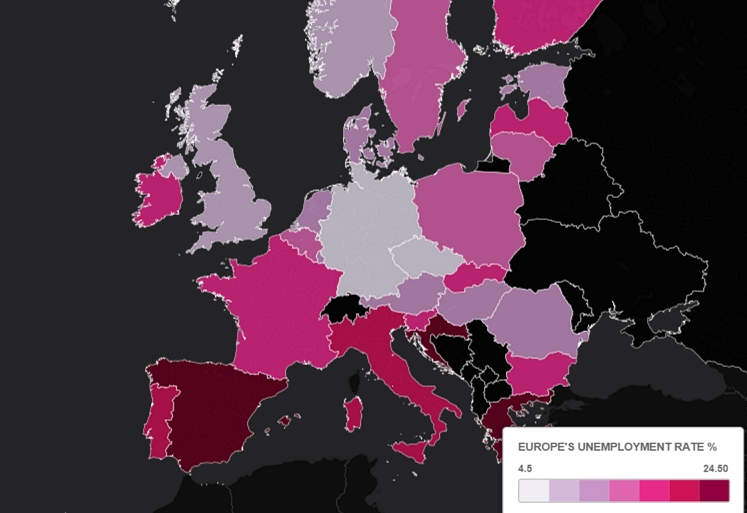 Europe is stuck in a jobs crisis. Eight years on from the financial crash, unemployment remains the biggest threat to the social fabric of the single currency’s weakest economies.

The latest round of labour market data show the average unemployment rate in the 19-country bloc fell to 10.4pc, its lowest level since September 2011.

But the headline number masks a pernicious divide between the strongest and weakest (see map above). German unemployment hit a post-reunification high in December 2015, falling to just 4.5pc.

• A new disease is spreading across Europe: hysteresis

As Europe’s largest economy motors along steadily – Germany has created 33,000 jobs a month on average over the last six years – the single currency’s laggards are still not catching up.

In Greece, unemployment rates have been stuck at around a quarter of the population since 2014.

Italy’s unemployment rate remained unchanged at 11.4pc at the end of December – despite the reformist efforts of prime minister Matteo Renzi, who has been on a two-year bid to transform the fortunes of the debt-laden economy.

The number of Italians in work fell by 21,000 in December compared to the month prior, while the registered unemployed grew by 18,000.