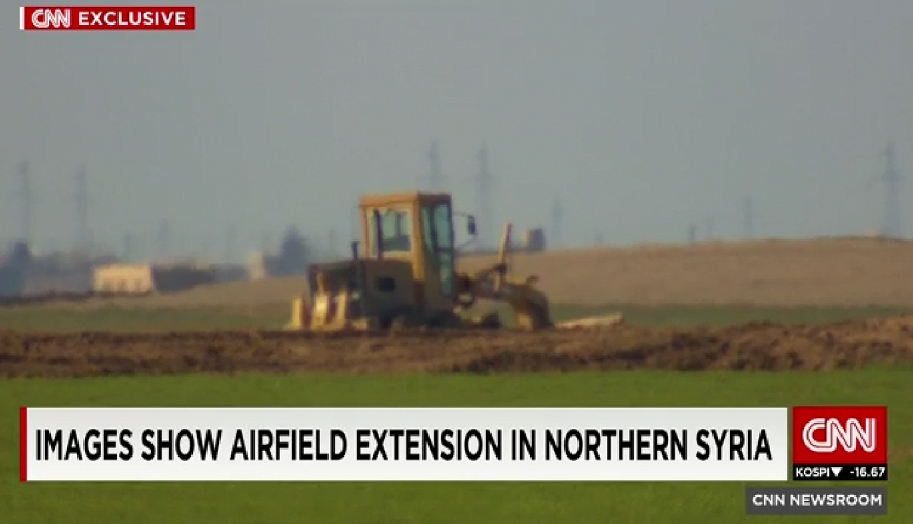 [ Editor’s Note: VT breaks another story first with corporate media coming in behind but with never a mention of us. What are they afraid of, that their viewers will start asking question like how can a group like VT beat the major news orgs in a war zone corporate media has been reporting on for some years? Notice that none of the political and international law issues were brought up during the CNN report… Jim W. Dean ]

America’s air base inside Syria, its location established by VT some weeks ago, is illegal.  The assumed legal basis for the US entering Syrian territory and building a base in that the US disapproves of the elected government in Damascus because of its alliances with Russia and Iran.

The base sets up a western flank to prevent Turkey from moving against the YPG from the east, a move the CIA hopes will reinstate some control over their relationship with ISIS.

Then again, America says it has to build this base to fight ISIS, an organization set up between the CIA’s General Petraeus, who laid the ground work while US commander in Iraq, and ill fated Sunni governors who sought a hedge against Shiite power in Baghdad.

Together they empowered a grand scheme with Israel, Saudi Arabia and Turkey, to dismember Iraq, allow the “Barzani Caliphate” to steal the massive Kirkuk oil field and tighten Turkey’s iron fisted rule over the Kurds, until of course Erdogan finishes killing all of them off.

Syria was to become an ISIS “super state,” a platform to destabilize the entire region, north into the Caucuses, taking down Georgia, Azerbaijan, Armenia and heading north and eventually west, eventually setting up a nuclear terrorist state bordering on India

The Africa plan, an ISIS state in Libya, then sweeping down across the Sahara and Sahel, melding with Boko Harum, al Shabab and other groups, taking down in quick order Nigeria, Cameroon, Ghana, Sierra Leone (using ebola as well?) and on to Sudan, Ethiopia, Somalia and Kenya.

All is well under way.