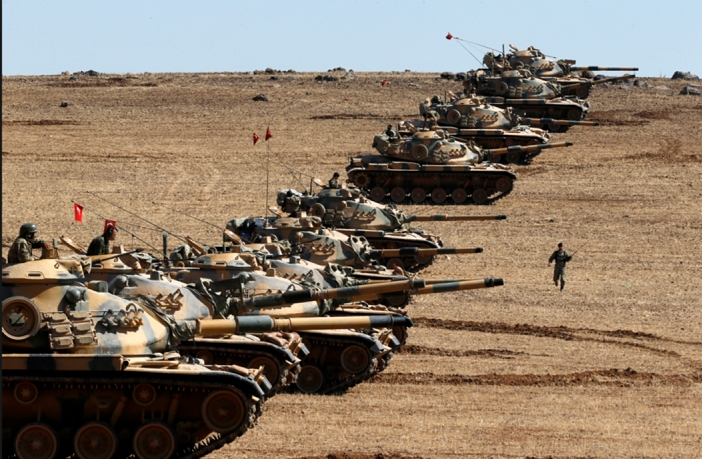 What is happening on the Turkish-Syrian border gives grounds to think that Turkey is preparing a military invasion in Syria, Russian Defense Ministry spokesman Igor Konashenkov said.

“We have good reasons to believe that Turkey is actively preparing for a military invasion of a sovereign state – the Syrian Arab Republic. We’re detecting more and more signs of Turkish armed forces being engaged in covert preparations for direct military actions in Syria,” Konashenkov told media.

“We’re perplexed by the fact that the usually talkative representatives of the Pentagon, NATO and of the groups allegedly protecting the rights of Syrian people remain silent despite our calls to react to these actions,” Konashenkov remarked.

He also pointed out that the Russian Defense Ministry has intensified all types of surveillance activity in the Middle East.

“So if someone in Ankara thinks that cancelling a Russian observation flight would help conceal something, that is just the mark of an amateur,” Konashenkov said.

Turkey’s refusal to allow a Russian inspection flight over its territory is an attempt to conceal Ankara’s illegal military activity on the border with Syria, the Russian Defense Ministry said Thursday.Ankara has not allowed Russian inspectors to conduct a scheduled inspection flight over the Turkish territory under the Open Skies Treaty on February 1-5.

​​”Such steps, taken by a NATO member-country, undermine confidence- and security-building measures in Europe,” ministry’s spokesman Maj. Gen. Igor Konashenkov said.
​”We are considering Turkey’s move as a dangerous precedent and an attempt to hide its illegal military activity on the border with Syria,” Konashenkov stressed.
​Turkey supplies weapons and recruits to the terrorists in the northeastern regions of Syria, Russian Defense Ministry spokesman Igor Konashenkov said Thursday.

“I would like to point out another instance of provocative actions perpetrated by Turkey on the Syrian border. On this image you can see a checkpoint at the Turkish-Syrian border in the Reyhanli-Sarmada region. This very checkpoint is being used during nighttime to smuggle militants and weapons from the Turkish territory to the terrorists who seized control of the cities of Idlib and Aleppo in the Syrian northeast,” Konashenkov told media.

​He also remarked that the US and NATO partners label these caravans as ‘humanitarian convoys’. He pointed out that Turkish journalists who attempt to determine the nature of the cargo that is being transported by said convoys often end up imprisoned by the authorities.
​​Konashenkov also compared the photographs of the cargo truck parking areas in one of the border regions between Turkey and Syria where the Syrian side is currently being controlled by the terrorists, taken on October 26, 2015 and on January 30, 2016.

“These parking lots were actually expanded and even outfitted with security measures by someone. Also, these lots look like they see a lot of traffic. During peacetime, that would look like a sign of an increase in trade turnover between the two neighbors. But during war, this is how one prepares transport infrastructure for the imminent military invasion,” he explained.

According to Konashekov, such lots can be used to facilitate swift advance of military columns carrying weapons and munitions to the battlefield, and also to rapidly deploy and extract military personnel.

“There are plenty of similar sightings on the border between Turkey and Syria, including the presence of the military hardware and personnel. Therefore, even though Ankara cancelled our observation flight, that won’t help conceal the illegal Turkish military activity in the region,” he concluded.

DAMASCUS (Sputnik) – The source added that Turkish artillery is directed at the Syrian Army positions.

“Turkish artillery has given cover several times when units of terrorists were retreating and giving up their positions, which allowed the terrorists to leave for Turkey,” the source told RIA Novosti.

The source added that Turkish artillery is directed at Syrian Army positions.

The Syrian authorities have repeatedly accused Turkey of providing weapons, intelligence data and financial support to Syrian militants while buying smuggled oil from the Islamic State jihadist group, outlawed in Russia and a number of other countries.

Syria has been in a state of civil war since 2011, with the country’s government fighting a number of opposition factions and radical Islamist groups, including Daesh, which is prohibited in many countries, including Russia.

According to a high-ranking source in the Russian Foreign Ministry, Ankara’s refusal to allow Russia to conduct an observation flight over Turkish territory under the Open Skies Treat confirms Moscow’s concerns that Ankara is supporting the Daesh.

MOSCOW (Sputnik) – Ankara’s refusal to allow Russia to conduct an observation flight over Turkish territory under the Open Skies Treat confirms Moscow’s concerns that Ankara is supporting the Daesh, which is prohibited in numerous countries including the United States and Russia, on the Turkish-Syrian border, a high-ranking source in the Russian Foreign Ministry said Thursday.

Russian inspectors planned to conduct the observation flight on board an An-30B plane over Turkish territory on February 1-5, but they were refused permission to do so after they arrived in Turkey and announced the flight route.

“This case is of course outrageous because the Open Skies Treaty today is practically one of many mechanisms that continue to operate in the European space and this treaty is valid and allows for acquiring valid information on steps being taken or not being taken by one or another state,” the source told RIA Novosti.

He reminded that in 2015 the West actively accused Russia of illegal activity on the Ukrainian border and NATO member countries requested observation flights over Russian territory, the results of which fully reversed the rumors.

“This once again confirms those concerns that the Russian side has voiced several times on using the Turkish-Syrian border to support Daesh militants,” the source said.