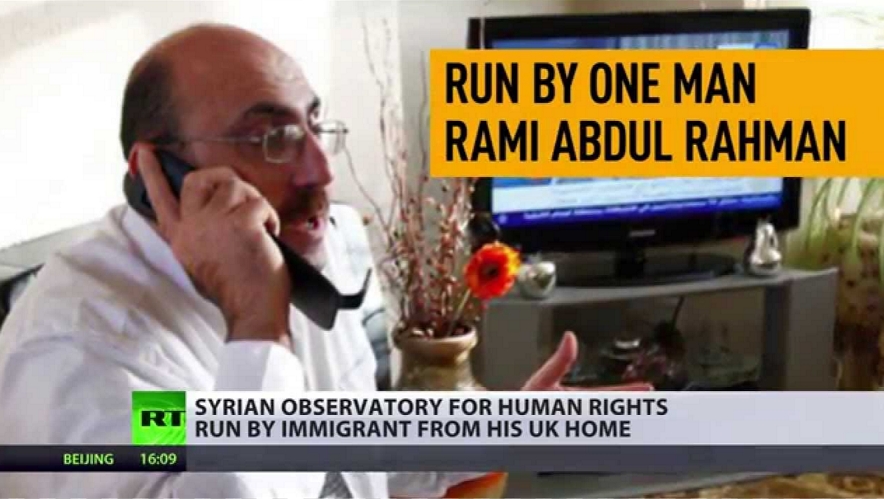 Every death in Syria and Iraq, were one to be honest, can be blamed on a myriad of causations, Turkey’s oil dealings, recently come to light, are but one of many. Without propaganda, the US bombing campaign might have been real and the endless flow of Raytheon’s TOW missiles to ISIS might have been stemmed.

Propaganda, the war of cowards and sneaks, isn’t as faceless as many assume. Today we will take a look at a face or two, perhaps make someone “famous.” As the war in Syria and Iraq is turning against NATO, a number of “public relations challenges” have arisen:

The much vaunted coalition of rebel forces fighting Assad has long been exposed, its few units held together long enough for photo ops, having quickly disintegrated into the ranks of the more attractive and Saudi-paid terror groups like ISIS, al Nusra and Zahran Allosh’s Jayash al Islam, perhaps most brutal of all.

Terror leaders like Zahran Allosh and dozens of others, have been targeted by the renewed and invigorated Syrian/Russian capability, giving hope to many that, combined with Baghdad’s offensive in Anbar, ISIS and her “sisters” outside Libya can be defeated.

However, as Turkey, Israel and Iraq’s Kurdish leadership are increasingly shown to be in bed with these terrorists, all backed by Saudi cash, the sleazy propaganda war, just as dangerous as the Paris terror attacks, has entered high gear.

Cited as prominent among the cheerleaders for terrorism are Kareen Shaheen of the Lebanon Daily Star and UK Guardian and, of course, Rami Abdul Rehman, the “Syrian Human Rights Observatory,” exposed by Russia Today as a “one man factory of deceit.” Today we look at Sheen’s work.

This week, Zahran Allosh, leader of the powerful terrorist group, Jaysh al Islam, while attending a reconciliation meeting with leaders of ISIS groups brokered by the Mossad, was killed by Syrian, not Russian, bombs as mis-reported. Hours later, Syrian Special Forces “Tiger” units stormed the headquarters of Allosh’s successor, Abu Hammam Bowydany, who may well be dead also.

But who was Alosh and what does his death mean?

To gain an understanding, one only has to follow his de facto personal publicist, Kareem Shaheen, whose article in the UK Guardian on the death of Zahran Allosh is filled with misdirection, fabrication and childish propaganda.

Shaheen, now reporting from Istanbul, having left Beirut for the arms of the Erdogan regime and Turkey’s deep pockets, works hand in hand with the now discredited Syrian Human Rights Observatory. Shaheen credits the SOHR, a one man operation in Coventry, as source for all news and announcements involving Syria, whether involving UN activities or taken from military reports.

The clear goal of the two, Shaheen and Rami Abdul Rehman, the entire “Syrian Human Rights Observatory,” is to fabricate stories of gas attacks, sarin, mustard, chlorine and blend them in with equally fabricated mass killings and “barrel bombings” in order to deflect blame from Turkey, ISIS and other terror groups like Jaysh al Islam and Jabat al Nusra, for the estimated 250,000 Syrian civilian deaths.

He repeated this bizarre charge even in light of charges by Turkish parliamentarians that their own government, now hosting Shaheen as a “guest” was responsible. From an unsourced, typical for Shaheen, article dated December 25, 2015, published in the UK Guardian:

“One of the most controversial figures in the insurgency, Alloush rose to prominence as the leader of Jaysh al-Islam, which has maintained control over areas in the suburbs of Damascus despite years of siege by the Assad regime and relentless aerial campaigns on opposition-held areas. Eastern Ghouta was even subjected to chemical attacks when the government launched missiles laced with sarin in the area, killing over a thousand people – including many children.”

Following this journalistic “stink bomb” is something even more curious and “ham handed,” written in a style typically taught by Israeli intelligence organizations, the curious mix of simple and reliable information from real sources and fabrication from imaginary sources, jumbled together to confuse all but the most alert.

First of all, his “well-placed source” didn’t really tell the guardian, nor is that source named. In fact, what exactly is a “well-placed terrorist?” These are rebels, they are terrorist mercenaries, paid by Saudi Arabia, who have murdered 250,000 people, and are responsible for mass rape, kidnapping, beheadings, burning people alive and, if possible, worse? How do you “place” a terrorist, much less “well-place” a criminal? It gets better.

Again, Shaheen’s terrorist sources are “rebels,” and there are now two of them. Here Shaheen now adds in SANA, the Syrian State News Agency to his mix for the appearance of legitimacy then quickly inserts a mention of Rami Rehman’s “SOHR,” whose statement is not only unsourced but, as usual for the Syrian Human Rights Observatory, totally inane as well.

There is a reason Shaheen brackets the SOHR reference with “a network of wide contacts in Syria.” You see, Rami Rehman lives in Coventry, a bleak city in the British midlands and hasn’t visited Syria in 15 years, a fact brought out in a Russia Today investigative piece debunking Rehman and his imaginary “SOHR” group, now defended by Shaheen, who no one seems to know either.

What is key, of course, is that the UK Guardian published this piece, without sourcing and containing the bizarre allegations of Syrian government sarin missile attacks, not only unsubstantiated, but bordering on insanity.

Back in May 2015, Allosh was interviewed, supposedly, by the “prestigious” McClatchy News organization which runs a number of major American newspapers. McClatchy “correspondent,” Mousab Alhmadee handled the interview, describing Allosh, responsible for hundreds of mortar attacks on civilian neighborhoods in Damascus as “moderate and conciliatory.”

Alhamadee is a classic example of the new mainstream journalist. A simple trip to YouTube shows Alhamadee, seated in front of a series of terrorist banners incoherently ranting anti-government conspiracies. Identified as an activist tied to anti-Assad groups which include ISIS and al Qaeda affiliates, Ahamadee barely speaks English much less qualifies as independent or unbiased. He is a full time spokesman for groups clearly identified as terrorist.

To McClatchy, an organization whose writing staff are typically interns or failed bloggers, much like other media outlets who are no longer capable of competing against the tailored coverage of organizations like VT or other quick response, financially unencumbered institutions, the new rule has been to “fake it.”

Thus, sources are always anonymous because, frankly, they don’t exist. Bloggers don’t have government contacts, they don’t go to press conferences and don’t have longtime career contacts in military and intelligence to fall back on.

They read the available blogs, get their daily emails and, sadly, get “talking points” from the special interest think tanks that help direct their articles and interviews with organizations like Press TV onto the world stage. Where, in the past, known journalists of “standing,” answerable and with “something to lose” made pronouncements that defined careers of lasting value, an endless army of faceless, nondescript “thugs with keyboards” tasked by “handlers” with covering for Erdogan’s ties to the Turkish Mafia or with using “Assad” and” barrel bomb” in the same sentence and $500 a crack, are the norm.

Here is how it worked in recent months in Syria. Whenever a bomb fell on ISIS, it hit a hospital or the “Free Syrian Army” instead. The BBC was caught in two separate efforts, one dubbing the term “chemical weapon” onto a video of a doctor discussing wounded in Syria and the other, and you just can’t make things like this up, hiring actors to play gas attack victims for BBC video documentaries.

One might ask how terrorists can so easily get their version of events on BBC or published by McClatchy, the Washington Post or Guardian?

It isn’t just the Syrian Human Rights Observatory, its Reuters and Associated Press, using “stringers” who are known Israeli intelligence agents, former Muslim employees of the Jerusalem Post or Times of Israel typically, or would-be activists like Ahamadee, who can travel freely, with no fear of kidnapping or beheading, who, when more carefully examined, might well better be working in an ISIS media center than writing stories for small town American newspapers.

Gordon Duff is a Marine combat veteran of the Vietnam War that has worked on veterans and POW issues for decades and consulted with governments challenged by security issues. He’s a senior editor and chairman of the board of VT, especially for the online magazine “New Eastern Outlook”.
____________