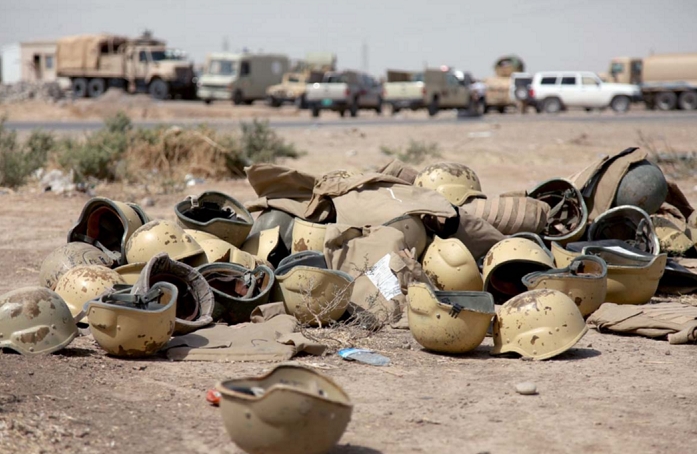 by Liz Sly and Zakaria Zakaria

[ Editor’s note:  Oh how it pains them, the writers at the Post, after years of fabrications about non-existent “moderate terrorists,” to accept a defeat that could only happen if the vast majority of the Syrian people were behind Assad and the Syrian Arab Army.

Also left out of the story is the both military and political momentum of the Syrian militants taking advantage of the amnesty offer to not only lay down their arms. They are now fighting inside the Syrian Army militias against the remaining foreign militants backed by the Western coalition.

If the terrorist supporters think they will turn the peace talks into a trip to “nowhere land”, then Damascus will keep retaking Syrian territory to consolidate its interior lines not only for continued fighting but for getting humanitarian aid back into needed areas and the refugees returning.

That will build even more support for Assad and the Syrian Army, and guess who knows that? Meanwhile Russia is cycling all of its pilots through the combat zone so they are are experience veterans, and all of its new weapons technology is getting field tested to refine it even more... Gordon Duff ]

GAZIANTEP, Turkey — Syrian rebels battled for their survival in and around Syria’s northern city of Aleppo on Thursday after a blitz of Russian airstrikes helped government loyalists sever a vital supply route and sent a new surge of refugees fleeing toward the border with Turkey.

The Russian-backed onslaught against rebel positions in Aleppo coincided with the failure of peace talks in Geneva, and helped reinforce opposition suspicions that Russia and its Syrian government allies are more interested in securing a military victory over the rebels than negotiating a settlement.

After two days of what rebel fighters described as the most intense airstrikes yet, government forces had succeeded on Wednesday in cutting off the rebels’ main supply route from the Turkish border to the portion of Aleppo city that remains under opposition control. On Thursday, the government captured several more villages in the surrounding countryside, prompting fears among residents and rebels that the city could soon be entirely surrounded.

The loss of Aleppo, Syria’s largest city and the most significant urban center to fall, at least partially, under rebel control, would represent a potentially decisive blow to the nearly five-year-old rebellion against Syrian President Bashar al-Assad. The rebels have maintained control of much of Aleppo since they surged into the city in 2012, prompting U.S. intelligence assessments that they eventually would topple the government in Damascus.

Instead, Russia and Iran stepped up their assistance to the Assad regime, helping the government stem, then steadily reverse, the losses. Most of the pro-government forces now fighting in northern Aleppo province are Shiite militias from either Iraq or Afghanistan that have been recruited by Iran to help out its ally in Damascus, according to rebels and military analysts.

The intervention by the Russian air force, ostensibly intended to battle the Islamic State, has mostly targeted moderate rebels, tilting the military balance in favor of Assad and enabling the government’s spurt of gains in recent weeks.