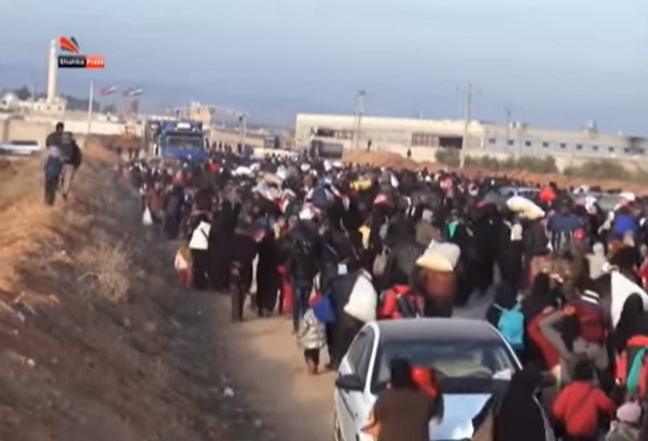 Hundreds of thousands of Syrians face the prospect of a brutal siege inside Aleppo, after Syrian government and Russian forces cut the last secure supply line into rebel-held areas of the city, aid and human rights groups have warned.

Up to 70,000 people have fled towards the border with Turkey, where they are cramming into already overcrowded refugee camps, hoping that Ankara will open crossings. The governor of one of the country’s most affected provinces, Kilis, said more that 35,000 had arrived in the past 48 hours.

With around half a million people at risk inside the city and sheltering in camps along the Turkish border, the assault on Aleppo risks creating one of the worst humanitarian crises of a years-long war, a major aid organisation working in the area has warned.

If government forces do set up a blockade, it would double the number of people living under siege in Syria virtually overnight.

“Today approximately 400,000 live in the non-government controlled areas, and we expect they will remain. The people able to leave would have left by now,” said Dalia al-Awqati, the director of programmes for Mercy Corps in Northern Syria, said. “There are serious concerns for all humanitarian organisations as to the possibility of a siege situation.”

The charity is second only to the United Nations in the scale of aid provided in the Aleppo area, and has been feeding more than 66,000 people in the city itself, but warned that because of recent fighting “operations in northern Syria have effectively been sliced in half.

“The main supply line from the north has just been cut. One other supply line exists but it’s very intermittent and unreliable,” Awqati said in a phone interview from her base north of the border.

The Syrian government and other parties to the war have been using siege tactics throughout the conflict, and a recent UN report estimated nearly 400,000 people were cut off from food and other supplies by armed groups, mostly by Isis or government forces.

The rapid advance by government troops has created turmoil near the border with Turkey, where the United Nations estimates that up to 20,000 new arrivals have joined 30,000 people who were living in grim tent cities near the border before the latest crisis.

Tens of thousands more Syrians have also fled the fighting and are heading north in hope of refuge in Turkey, even though Ankara has refused to open crossings. Altogether up to 100,000 people could soon be massed on on near the border.

Grim conditions there are less daunting than the prospect of more bombs, fighting or a protracted siege as Syria’s president, Bashar al Assad, tries to seal control of the country’s largest city.

Taking Aleppo would be a major strategic victory for government troops and their Russian backers, because it has been an opposition stronghold since the start of the war. But pushing recent advances through more rural areas into the heart of the city would probably result in a protracted and bloody battle.

In the street-to-street fighting needed to take urban areas, the strategic advantage of Russian air power that has driven recent advances by government troops would evaporate. Rebels determined to fight for the city have also been strengthening their positions and even heading into the city from other parts of Syria.

“There are reports that fighters are being sent to Aleppo from Idlib, and Hama, after a call for opposition groups to send any forces they can,” said Hossam Abouzahr, analyst with the Atlantic Council. “Speaking with people in the area, estimates [of the number of rebel fighters in the city] run as high as 60,000, but this is likely an exaggerated number.”

A siege would aim to weaken and demoralise fighters and the civilians they are living among to force an eventual surrender. Government forces have been using siege tactics throughout the war, and are experienced at setting up sophisticated and deadly blockades.

“The area likely to be included in a siege is the city and maybe 10km outside it,” said Abouzahr. “Usually it is not a simple ring. Instead the regime forces clear the surrounding countryside and set up multiple rings so that people and supplies cannot get in or out.”

Conditions are already worsening inside the city after days of intensive bombing, according to James Le Mesurier, the director of Mayday Rescue, which works with the white helmets, a group that provides search and rescue for civilians in the city.

The scale of the attacks is straining even teams used to dealing with carnage, who have responded to more than 500 attacks over the last week, he added. Their group estimates at least 20,000 people have left the city itself over the past seven days.

“The situation in Aleppo is extremely dire,” he said. “The teams are struggling to cope with the bombing of civilians that is taking place.”

Tens of thousands of other refugees now heading to the Turkish border have fled from areas north of the city, where there are still relatively large communities even after years of war.

Conditions were somewhat better than in the devastated streets of Aleppo, and some families had even reportedly returned from exile, choosing life there over the misery of refugee camps abroad.

“They have been badly affected by the war, nothing is normal in Syria. But roads to Turkey were functioning – supplies and food and things were coming in. There has also been a certain level of local governance, basic local services,” said Wael Aleji, spokesman for the Syrian Network for Human Rights.

“They preferred to stay in their homes as long as they could sustain that. Lots of them had shops, had small businesses, this was generating some income to them, they preferred that to living in camps or going to Turkey and searching for jobs and places to live as refugees.”