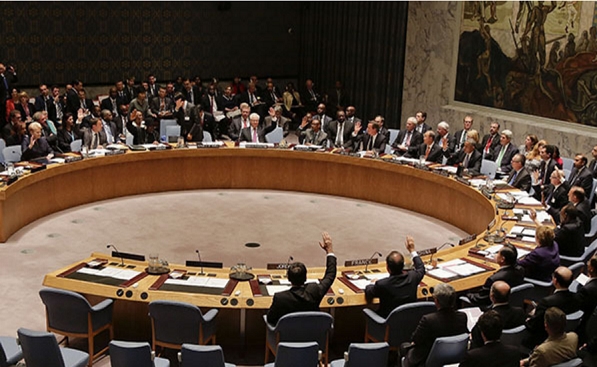 Geneva talks on the peaceful settlement of the conflict in Syria have been suspended. Obviously, Western leaders do not need peace – they need more bloodshed in the Middle East.

We spoke about the problems of world politics and the global war of the West against Russia with political scientist, historian, writer, Doctor of Political Sciences, MGIMO Professor and President of the International Institute of Scientific Cooperation, Elena Ponomareva.

“British Foreign Secretary Philip Hammond said that Russia’s and Iran’s participation in the talks on the Syrian problems would not bring any positive results, as Moscow and Tehran supported Syrian President Bashar al-Assad. He claimed that Russia was bombing civilians in Syria. Why did such harsh accusations appear prior to the talks in Geneva?”

“The pressure continues. This is a part of the informational war of the West against Russia. The more success Russia achieves both internationally and domestically, the tougher the West will react to our achievements. If Russia is successful in regulating certain conflicts, the West will not leave Russia alone – Western leaders will shower Russia with accusations. We have entered into a very long and difficult period of the informational, ideological, economic, political and psycho-historical war.

“It goes about the mental destruction of Russia as a subject of world politics. Churchill said during WWII that he was not fighting against Hitler – he was fighting against Schiller. Churchill said that about the German nation. Nowadays, Western leaders are struggling not only against Putin as a symbol of Russia – they are trying to destroy the legacy of Tolstoy, Pushkin and Dostoevsky so that they never come back.

“The West is putting pressure on all of Russia’s initiatives. No reasonable arguments are given – there is no dialogue. Simply put, no matter what Russia may propose, Western politicians and media interpret it as something absurd, bad, evil, something aggressive and expansionist. Who is into expansionism here? There are thousands of army bases all over the world, transnational companies from the US and Western Europe control global economy – so who controls the world?

“The West sees Russia as a monster. Yet, I believe that there is nothing terrible there. It has always been like that: as soon as Russia appears as a strong power, the West tries to trash Russia. We could see that during the Crimean War, on the eve of the First and Second World Wars. Nevertheless, we must understand that the truth is on our side, as we are acting in the interests of our country. Politics is about defending interests, and Western leaders constantly reaffirm that.

“Russia protects its national interests, just like Western countries protect their own. We need to constantly remind the West of our interests and promote these interests no matter what. We should not succumb to pressure.

“When Russia is miserable, the West sees that as something normal. When Russia is rising, the West sees that as a threat. Yevgeny Primakov told me a story that literally shocked me. Andrei Kozyrev, when serving as foreign minister, told the Americans once that the Soviet Union was too much fixated on its national interests. Kozyrev told former US President Richard Nixon that the US could help us define our national interests. Can you imagine how low the then administration had fallen? That was the time when the West was happy to see Russia everywhere – in the G8, in the Parliamentary Assembly of the Council of Europe and so on.

“As soon as Russia realized that the so-called “universal values” were contrary to our national interests, that they infringed upon our sovereignty and brought chaos to the world, Russia took the position to protect its interests. In return, the West showed us its teeth ad claws. Our position must be clear and firm. We do not need to make excuses to anybody, we just need to do our job.”

“Why is the West demonizing Bashar al-Assad, comparing him to Hitler, calling him the butcher, who killed more than 200,000 Syrians?”

“We have seen examples like that in history before. Not that long ago, Western tabloids were calling Slobodan Milosevic the new Hitler too, the butcher of Belgrade. This resulted in the bombing and dismemberment of the Federal Republic of Yugoslavia. Yugoslavia used to be a serious player in the region. Today, neither Serbia nor Montenegro have any significance in the region, let alone the narco-terrorist state – the so-called partially-recognized Republic of Kosovo. All this indirect evidence suggests that Milosevic was killed in the Hague prison. Today, multinational companies control the economic situation in these countries, starting from the banking sector and ending with the media and policy-makers.

“The same happened in Libya, where they demonized Gaddafi. Then US Secretary of State Hillary Clinton screamed with happiness in the camera when she learned about the brutal murder of Gaddafi – that’s how her brain was twisted. There was also Saddam Hussein in Iraq, and now it’s Assad’s turn in Syria. The West is attacking Assad not just because he is a demon or something – the West needs to dismember Syria.

Syria is already in chaos. There are four zones in the country: the Syrian Republic, Kurdistan, ISIL-controlled territories and an uncontrolled zone. Bashar Assad is a symbolic obstacle on the way to the dismemberment of Syria. If Assad is toppled, Syria will be dismembered just like Iraq and Libya were. If the West is demonizing a political leader, it means that the West has a goal to destroy his state. This is a litmus test.”

“What can you say about the talks in Geneva?”

“Of course, negotiations are vital in the settlement of any crisis. As they say, while diplomats talk – guns are silent. Unfortunately, with regard to the Syrian crisis, gun continue shooting. The Geneva talks have not brought any change. They were shrouded in the spirit of confrontation from the start. Western partners are trying to bring together representatives of clearly radical and terrorist groups. Of course, one can not equally approach the positions of the United States and Russia. It is the leading players that should come to an agreement among themselves.

As soon as the Russian Federation and the United States, representatives of leading European states agreed on the Iranian nuclear program, it was resolved. It maybe a temporary solution, but it is a solution that appeared as a result of progress in negotiations. The same was about Ukraine.

“One needs to negotiate with puppeteers of the Syrian crisis – those who initiated and supported it – the United States. We need to convince the Americans that Russia will not pedal back.”