[ Editor’s Note: The opposition will have some say in the future, but that will be based on their ability to pull votes in future elections, not on what powerful foreign backers they have, nor their ruthless terrorist cadres brutalizing the country.

If you will keep an eye peeled, you will see the term “moderate opposition” has dropped off considerably. The real reason for that is thousands of the moderate opposition has taken Assad’s amnesty offer, and many of them are now fighting with the Syrian army.

Western media now refers to what is left as the “opposition”. And their musical chairs game on hiding the terrorist groups behind a myriad of names and changing loyalties is now seen for what it really was, a was for the CIA and friends to magnify the real numbers of any legitimate opposition. The tens of thousands of foreign jihadis brought in will attest to that fraud, also.

Dear Ms. Natalie, there were no provisions agreed to in Geneva that the Syrian coalition would stop their anti-terrorism campaign. Since it started, Turkey, Saudi Arabia, and US TOW missiles have continued to flow into Syria. Taking Aleppo was obviously a key goal in the campaign to establish Syrian control over the northern part of Syria.

Your missive below is cheap spin doctoring. If the Syrian counter terrorism campaign was stopped now, it would allow major terrorist factions to regroup and resupply without having made any concessions toward a ceasefire. And then there is the long complicated list of items as to how the ceasefire would be managed, something that the UN thought would take months to negotiate.

Just a few examples are: how would weapons,  ammunition, and new fighters be prevented from reinforcing the terrorist held areas? Would the foreign jihadis be allowed to stay or would they have to leave? Would they be amnestied for war crimes?

The bombings you are so concerned about are saving a lot of Syrian army lives, as they have already lost tens of thousands. The current progress in the Aleppo area is due not only to the firepower from the air campaign, but the jihadis beginning to get out of the area while they still can.

I do not expect Damascus to hand over the northern part of the country to a mix of terrorists and insurgents. If they want a piece of Syria, they will have to get it from the Syrian people… Jim W. Dean ]

… from the Guardian, London

If Aleppo falls, Syria’s vicious war will take a whole new turn, one with far-reaching consequences not just for the region but for Europe too. The latest government assault on the besieged northern Syrian city, which has caused tens of thousands more people to flee in recent days, is also a defining moment for relations between the west and Russia, whose airforce is playing a key role.
–
The defeat of anti-Assad rebels who have partially controlled the city since 2012 would leave nothing on the ground in Syria but Assad’s regime and Islamic State. And all hope of a negotiated settlement involving the Syrian opposition will vanish. This has been a longstanding Russian objective – it was at the heart of Moscow’s decision to intervene militarily four months ago.
– 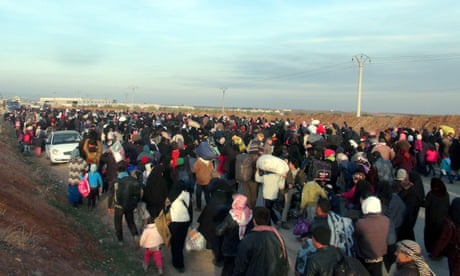 It is hardly a coincidence that the bombardment of Aleppo, a symbol of the 2011 anti-Assad revolution, started just as peace talks were being attempted in Geneva. Predictably, the talks soon faltered.

Russian military escalation in support of the Syrian army was meant to sabotage any possibility that a genuine Syrian opposition might have its say on the future of the country.

It was meant to thwart any plans the west and the UN had officially laid out. And it entirely contradicted Moscow’s stated commitment to a political process to end the war.