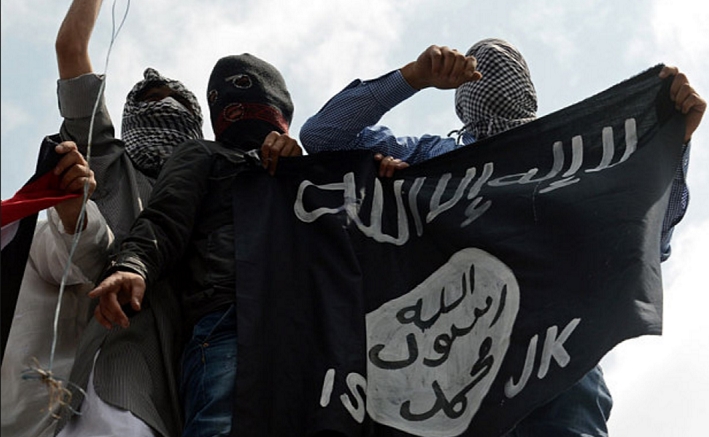 Ranks of Islamic State are beefing up in parts of Afghanistan with local media reports speaking of fresh fighters’ settlements along with family members, notably in northern Afghan provinces along the border with Tajikistan and other Central Asian nations.

The Central Asian states are, therefore, keeping a vigilant oversight on rebels’ movements and ground gaining near to the border. To this development, Tajikistan is relatively on high alert and panicked to make arrangements.

Eliminating any signs of radicalism, Tajik govt. instructed local authorities to shave the beards of thousands as a preliminary anti-terrorism effort. It has embattled scores of soldiers on the potentially hazardous boundary with Afghanistan, accompanied by Russian militaries.

Spokesman for Tajikistan’s home security committee has told media that some 500 militants from different terrorist groups such as Taliban, Islamic Movement of Uzbekistan and Jamaat-e Ansarullah have taken up positions in peripheral districts of provinces – other than that of Kunduz province. In October 2015, city of Kunduz underwent a cold blooded civilian massacre after a bunch of Taliban killers stormed the city.

At the time, reports were asserting the raid as the first signal of hazard to Russian security amid Moscow’s initial intervention in Syria’s war. Russia put its military boots on the ground in Syria to play power with Western powers who had been engaged in indiscriminate and desert-shooting drone fires before Russia’s stepping in. Moscow’s bombing of Jihadists earned it a worldwide prestige.

The Kunduz assault was designed premeditatedly as a strike to deter Moscow. However, the West’s decades-long grand plan to push insurgency over the northern Afghan border into Central Asia would also allow such an attack to happen. New brand of radicals under different flags, battle cries, tactics are taking shape away from media’s view that makes Kunduz-like attacks certain in the future.

Baghlan, a province located in the northern parts of Afghanistan is turning the hotspot for extremists who are no longer known as “Taliban”. Local govt. dealt with rebels to abandon a large stretch of territory to this group. Although the deal was responded with wide public outcry, it was implemented nonchalantly.

The next chapter of West’s war against Russia is sobering and the enormous inflow for a stronger rebel force is receptive of multifold disastrous consequences in Afghanistan. The buildup in the rebel rows is certainly a bad music to the ears of Central Asians and Moscow, as well as to natives of this land [Afghanistan].

A Pakistani daily quoting Sartaj Aziz, PM Nawaz Sharfi’s foreign policy advisor, says that U.S’s wrong policies in the region have driven Afghanistan further out of path of stability. The daily has made it clear that Central Asian countries will be victimized for the Western objectives.

The suspicion reinforces with his destination, Turkey, a country already defamed in the face of world over conspicuous evidences of supporting ISIL operations in Syria.

In the first years of occupation, West was largely expected in Afghanistan to annihilate any terrorist group. Unlike public hopes, the West is trying to play up the matter of Islamic State while it proclaims fight against the group.

The Western top military generals words are in conflict and ambiguous. The term of presence and the number of U.S troops on the ground has failed to be determined resolutely. Their blacklisting of any terror group doesn’t have paid an effective outcome.

Gen. Nicolson who just took over Gen. Campbell as secretary of NATO’s Resolute Support Mission has said NATO would not focus on striking Haqqani Network, adding that the group is off the agenda. Haqqani Network is the deadliest terror group for Afghanistan and has been involved in tens of civilian-targeting attacks.

Gen. Nicolson’s comments reveal his apathy to Afghan toll. NATO and the West, with advanced surveillance resources including drone and security balloons over the skies of Kabul have failed to contribute in counterattack measures.

For them, Haqqani affiliates’ covert operation is “visible”. But under circumstances that the group is not causing injury or damage to the NATO forces or equipment, Haqqani network is delisted from their plan, even though it is “notorious” globally.

This is sort of “let go” of the group’s atrocities, despite NATO leadership’s declaration steadily boasts new world order, human rights at war, priority to civilian life and so on.

Afghanistan, by its own, can brush off all kinds of terrorists in Afghanistan, if it is permitted to do so, notwithstanding the country could get much advanced and a huge heap of weapons from regional powers, unless under a real state.

Insecurity is aggravating, to the extent that is pushing American diplomats to use helicopters for transportation.

Compounding problems, Taliban militants resorted to break off power cables in restive Baghlan province. They look for extortion or concession by holding control of power-cable-extended area. Afghan authorities are yet to restore the power cable that has caused disruption to normal civilian life.

The province has already gotten lawless and gone out of security control and this was dual leadership government’s “willful” decision to give up the ground. The deal was utter mistake and Kabul leaders would someday pay back for this.

The power cable cut-off raises fears about government’s ability to secure the mega TAPI gas pipeline project. However, Afghan economists throw blame on oil mafia for being behind the tragedy in order to get its imported fuel sold by forcing government facilities and households to purchase fuel for power generation. In spite of lowered global oil prices, Afghanistan is still suffering from steep fuel price with a modest descent.

Following the first and second QCG meetings, the third meeting was held this Saturday in Islamabad. Although Afghan authorities have expressed optimism that this meeting is most likely to born a conclusion for peace, the assembly would produce no resolution for peace owing to multiplicity of armed opposition groups.

Last year, as the Taliban leadership broke up into factions and the Islamic State loomed, an analysis into these two factors would take down the significance of the underway peace campaign. Because if the peace dialogue is to take place with one Taliban faction, the other would oppose and if both or all Taliban factions are brought to negotiating table, the Islamic State would keep exposing Afghanistan to insecurity.

West is penning post-2014 strategy and transforming the Afghan war as the Taliban’s role is on the ebb. Similarly, from Western perspective, Pakistan’s role in Afghan war is also waning, because the rebel bases are gradually being shifted from Pakistan to parts of Afghanistan.

At the same time, Pakistan sought to establish Mullah Fazlullah’s hideout in Afghanistan, who it frequently has claimed was leading terror attacks in Pakistan.

It intends to pose itself as highly vulnerable to the named Taliban commander in international platforms. Pakistan believes India’s RAW and U.S’s CIA is standing by Mullah Fazlullah, and regards it as their shared plan to nurture the group against Pakistan.

Pakistan’s ISI is cautious about Afghan intelligence agency’s future behavior and is working to build on trust in the public. Last month’s assault on Bacha Khan University in Peshawar or other likewise attacks are obviously seen as havoc, though it carries oppositely good consequences for the country’s military leadership.

For the time being, Pakistan is in extreme need of Pashtun leaders, politicians and, in general, public support.