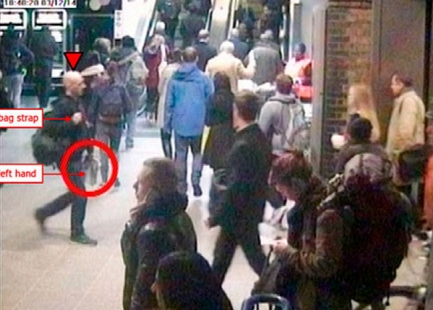 Editor’s note:  When VT UK correspondent Michael Shrimpton, a noted barrister, was arrested as a nuclear whistleblower, UK prosecutors leveled charges against Shrimpton based on data evidence later found to have been altered, caught by their failure to adjust time stamps.  The CPS (Crown Prosecution Service) loaded files onto Shrimpton’s media that didn’t even exist until the “evidence” was already in police hands, something we are finding typical of the UK’s justice system.  As with America, arresting prosecutors for perverting the course of justice seems impossible.

Crucial CCTV footage in a “bizarre” sex assault prosecution had been slowed down by the authorities to give a misleading impression of events, the defence solicitor in the case has revealed.

The Telegraph reported how Mark Pearson, a 51-year-old artist and picture framer, was accused of brushing against a well-known actressin a mass of train passengers at London’s Waterloo station.

Mark Pearson said he had endured a year-long “Kafkaesque nightmare” as a result of the complaint  Photo: ITV/This MorningHe was cleared of “sexually penetrating” the woman, who cannot be named for legal reasons, after a jury rejected claims the crime could have taken place in a brief half-second contact in a busy railway station.

• Commuter who walked past actress at Waterloo station cleared

But it can now be disclosed that – to the concern of Mr Pearson’s legal team – the Crown Prosecution Service (CPS) supplied original CCTV depicting the alleged assault in an amended format which gave a misleading impression of the incident.

“If we had not taken the steps we had, the CCTV would have been presented to the jury at that amended speed.”
Mark Bagshaw, defence lawyer

Mark Bagshaw, the defence solicitor, said: “The CCTV was served on us in a way in which had been altered.

“The few seconds when my client walked past the alleged victim had been slowed down so it looked like he had more time to commit the alleged actions than he in reality did have.

“Instead of one frame per second it was running at one frame every two seconds.”

Mr Pearson’s legal team was forced to hire a specialist CCTV forensic expert to present the CCTV at the correct speed and then create a storyboard of the incident (see below).

Mr Pearson seen carrying a bag and a newspaper on CCTV footage recorded at Waterloo Underground Station at 18:40:20

Mr Pearson seen with his right hand on his bag strap on CCTV footage recorded at Waterloo Underground Station at 18:40:24

The changes made in the CPS’s version of the video were critical because the case hinged on whether Mr Pearson could have committed the assault in that amount of time – and the CCTV gave the impression the window was twice as long as it was in reality.

The lawyer said: “Before the trial this storyboard was served to the CPS with a request that they review their decision to go ahead with the prosecution. They went ahead anyway.

“If we had not taken the steps we had, the CCTV would have been presented to the jury at that amended speed.

“In the end, the prosecution did not rely on the CCTV at all, except to show that my client was at the station.

“The jury was only shown the CCTV as part of our case.

“The first time the alleged victim saw the CCTV was in court, and her reaction was ‘That can’t be me in the CCTV’.”

A jury at Blackfriars Crown Court took 90 minutes to clear Mr Pearson of the charge of “sexual assault by penetration”.

In a three-day trial Mr Bagshaw, defending, said the allegation could not have taken place in the half-second time frame shown on CCTV, especially as Mr Pearson was carrying a newspaper in his left hand – the one he was alleged to have used in the assault – and holding his bag in his right.

Mr Pearson told the court: “I would have had to crouch down, put my hand up the woman’s skirt… penetrate her, take my hand out again… all while holding the newspaper and walking along the concourse.

“It is against everything I believe in as a human being. I did nothing.”

There were no witnesses, no forensic evidence and the actress failed to pick out Mr Pearson in an identity parade of video images following the alleged incident in December 2014.

The actress, who is in her 60s, was wearing a coat and jacket and a thin dress over “training pants” following a yoga class, the jury heard.

Mr Pearson, who was traced by police from his Oyster travel card records, said: “‘One of the many frightening aspects is that this could have happened to anyone.

“For me, half a second turned into a year of hell. I feel I have undergone a form of mental torture sanctioned by the state.

“It is just bizarre.”

He later told ITV’s This Morning programme: “The footage totally contradicts what she was saying.

“I hold the CPS more responsible because we had the CCTV footage analysed by an expert, and the CPS still proceeded with the trial.

“There is something that has gone radically wrong with their processes.”

His partner Carol Ho, 41, said: “None of us believed for a second that he was capable of doing what this woman said.”

The case raises further questions about the CPS’s decision-making insexual assault cases, which has been under intense scrutiny following a series of failures.

The defendant’s solicitor Mr Bagshaw said: “If someone makes a complaint that is daft it is the responsibility of the CPS to bin it.”

A CPS spokesman said: “There was sufficient evidence for this case to proceed to court and progress to trial. We respect the decision of the jury.”