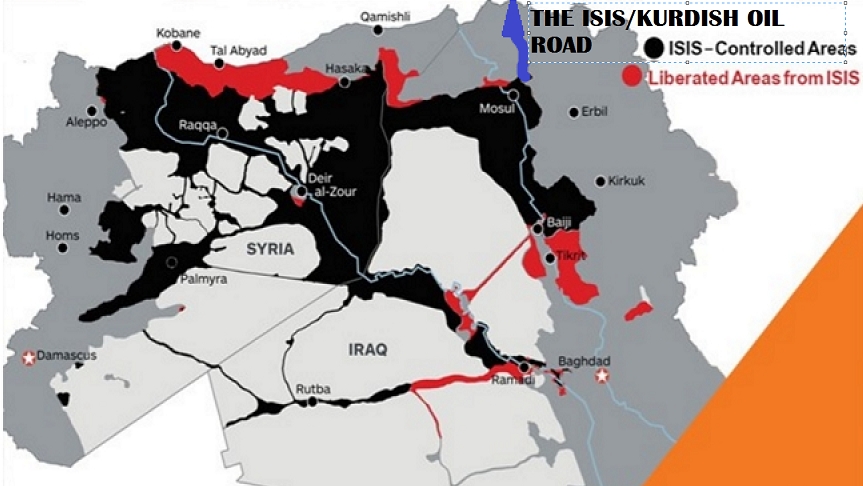 [ Note: Seeing can help in believing. We will try to keep these morning Sitreps (situation reports) coming with the map work included. That is how we routinely do a lot of our Skype briefings for a variety of official and unofficial audiences.

Without being able to have a good handle on the geography, using just text and audio reports only works for people already intimately familiar with the geography.

A lot of the lying we see by various government and corporate media platforms stems from them taking advantage of the public’s not being able to follow the tactical and strategic battlefield situations in both Syria and Iraq.

The most recent example was a Press TV top story news show I did this morning, where Erdogan actually accused the Russians of “occupying” parts of Syria. I am sure this came as a shock to President Assad, the government, and the Syrian army. No one has challenged until today that only Russian marines are the major ground component, but tied down to base protection.

Russian trainers and advisers or course are in the field helping with communication intercepts and keeping a close eye on correct targeting and confirmation of what is happening on the ground.

And yes, there will be Russian and Iranian special forces operating on the ground, as at least a half dozen Western countries have. They are always present in these conflicts, in uniform or which ever garb works best based on where they are operating. The big difference is the Russian and Iranians are invited.

Erdogan is panicking as he is watching his supply network being torn down in northwest Syria, which will blunt his projection of power. It will also bring the day closer when the Syrian refugees in Turkey can start coming back to that area, which of course would be happening during the 18-month negotiation window.

Whose political fortunes are going to rise as that happens?…the “opposition’s”? … ISIL, Turkey, the US and the Saudis? …or Assad’s? The former had planned to keep holding these long held areas of Syria during the talks for leverage, and have the option of beginning military action again, if they wanted.

Lavrov tipped the Russian hand a week ago when he said that there must be a controlled cessation of the flow of fighters, weapons and ammo for any ceasefire to be effective.

What we are seeing is the conditions to achieve that being constructed on the ground, as part of a well thought out counter terrorism campaign, to defeat them rather than fight them forever. And now we see the backers of the terrorists showing their hand quite openly, which is just wonderful… Jim W. Dean ]

The infographic below was released by Alalam in Iran, outlining another view of what is going on, another view based on error.  Similar maps come out of the Institute for the Study of War, the “Kagan/Noodleman” propaganda circus.

There is a big secret, not the only one, there are so many, starting with General Petraeus and the real roots of ISIS, his assignment to empty Iraq’s prisons of the worst, pour money into them, the Sunni extremists, divide Iraq and prepare for war with Iran.

This is where ISIS comes from, the mind of Dick Cheney, the idiocy of Petraeus and the Kagan family that brought us the war with Russia that has been unfolding in Europe beginning with Ukraine.

Now Europe is on her knees, Poland now a Nazi dictatorship, Turkey blackmailing the EU with an endless flood of refugees and terrorists, ready to bring Europe to her knees.  If you don’t think Turkish intelligence isn’t responsible for seeding ISIS elements into the refugee mix, giving them passports, setting them up with asylum, furnishing them with apartments and weapons, cars and credit cards, you are not paying attention.

ISIS oil routes into Turkey, that the Russians presented so much evidence of, all go through Kurdish controlled regions.  Now that Turkey has moved thousands of troops into the region, sending Iraq to the UN for help, all done with Kurdish treachery, we have taken a closer look at who is really responsible for funding ISIS.

America says Assad is the ISIS oil partner.  We say it is the Kurds along with Erdogan and we stand ready to prove it.

The maps tell a story of a continuous Kurdish controlled area that covers more than 70% of all stolen oil, all moved directly through Kurdish lines in areas where there is no ISIS presence.  Turkey is currently inside Iraq building a new and highly illegal air base in the middle of the oil smuggling zone, all done with the full cooperation of the Kurdish Barzani regime in Erbil.

The Syrian and Iraqi borders with Turkey from Western Syria to the Iranian Border, the areas of most oil smuggling, are not only fully Kurdish controlled and where Turkey has invaded, but it is also where US Special Forces units have entered Syria illegally as well, right in the middle of the ISIS oil convoy area, according to Russian satellite intelligence published for the world last week.

According to our sources who live in this region, it is totally “combat free,” a safe-zone for smuggling arms one way and oil the other, quite a different story than the ones the media tell us.