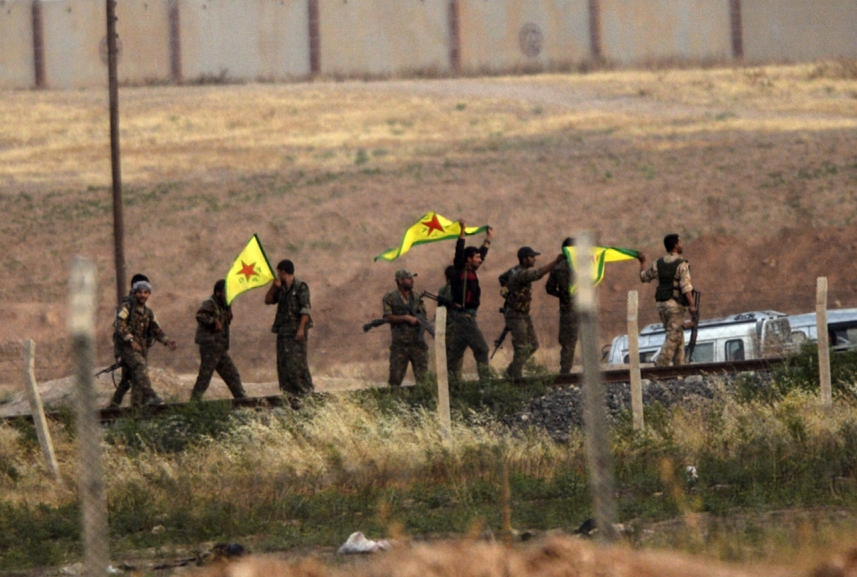 In an angry tirade starting with “Ey America!” Turkish President Recep Tayyip Erdogan accused Washington of causing the bloodbath in Syria by not recognizing the Kurdish forces fighting against Islamic State in the region as terrorists.

Bringing a new level of pressure to bear on its NATO ally, the Turkish president questioned Washington’s commitment as a fellow coalition member.

“Oh America! I told you many times, you are [either] beside us, or all of these terrorist organizations. You haven’t had a good grasp of them, and that is why the region has turned into the sea of blood,” Erdogan said, referring to the Syrian Kurdish Democratic Union Party (PYD) and its militia wing, the People’s Protection Units (YPG), which the US does not recognize as terror groups.

“We have written proof! We tell the Americans ‘it’s a terror group.’ But the Americans stand up and say ‘no we don’t see them as terror groups,’” he added. “Allies don’t tell each other my enemy’s enemy is my friend. You must have principles. But there are no principles here.”

READ MORE: ‘Me or terrorists?’ Furious Erdogan tells US to choose between Turkey and Syrian Kurds

Erdogan’s remarks come amid an escalated diplomatic rift between the US and Turkey over their respective goals in Syria, where both say they are fighting Islamic State (IS, also known as ISIS/ISIL, Daesh).

State Department spokesman John Kirby said on Monday that “Kurdish fighters have been some of the most successful in going after Daesh inside Syria,” adding the US does not view the Kurdish militia as a terrorist organization. As to the disagreement over the group with Ankara, Kirby said “even the best of friends aren’t going to agree on everything.”

Turkey summoned the US ambassador in Ankara in response to Washington’s announcement.

“We view the PKK as a terrorist organization, you know, but we make a clear delineation between the PKK and the YPG. We believe the YPG is focused thus far on combating Daesh in Syria, and we’ve supported them in that effort,” he said at a briefing.

Responding to a question by RT’s Gayane Chichakyan, Toner added “we understand their [Turkey’s] concerns, the threat that they feel from the PKK and, frankly, from the YPG, we disagree on the YPG.”

However, the issue of the Kurdish fighters in Syria is not the only topic causing a row between the two countries. Another major disconnect is the prospect of Turkey conducting a unilateral military intervention in Syria, to which Ankara has been hinting.

“We will return our historic debt. At one time, our brothers from Aleppo defended our cities of Sanliurfa, Gaziantep, Kahramanmaras, now we will defend the heroic Aleppo. All of Turkey stands behind its defenders,” Davutoglu said at a meeting of the Party of Justice and Development parliamentary faction, which he heads.

Apparently, it is the latest powerful offensive of Syrian government forces loyal to President Bashar Assad that triggered the remarks, not the ongoing insurgency of Islamic State. Aleppo is presently occupied by Syrian rebels and Damascus has made it clear that it now aims to retake both that key city and the Syrian-Turkish border, which terrorist groups have been using to bring in fresh arms supplies and smuggle out stolen oil.

Meanwhile, the Kurds have emerged as a separate formidable force in the border region, as they simultaneously fight IS and seek more autonomy from Syria. The YPG took full control of the IS-besieged town of Kobane on the Syrian-Turkish border late last June. The victory became a powerful symbol of the Kurdish fight against IS in the area. Turkey, however, has repeatedly been blamed for targeting those Kurdish militant targets in the border region rather than IS.

The large ethnic group has been demanding greater autonomy for many years and the conflict between Kurdish insurgents and the Turkish government has, likewise, spanned decades, despite several failed ceasefires attempts for between the sides. Ankara has been blamed by a number of human rights groups for putting civilian lives in danger in Turkey’s own mainly Kurdish southeast.

In August, Ankara launched a ground operation to crack down on Kurdish fighters linked to the Kurdistan Workers’ Party. The violence ended a two-year truce with Kurdish militants who had been fighting a guerrilla war for independence.

In one of the latest developments, up to 21 academics were detained by Turkish authorities in mid-January for signing a petition urging Ankara to abandon its military crackdown on the Kurdish rebels in the southeast of the country. As many as 1,200 academics signed the petition.

‘Me or terrorists?’ Furious Erdogan tells US to choose between Turkey and Syrian Kurds

Riled by a meeting between a US official and the Kurdish People’s Protection Units (YPG), which controls the Syrian town of Kobane, Turkish President Recep Tayyip Erdogan has told Washington to choose between Turkey and, as he put it, the “terrorists.”

A delegation featuring Brett McGurk, the United States’ envoy to the coalition it leads against Islamic State (IS, formerly ISIS/ISIL), met the YPG over the last weekend in January. The YPG took full control of Kobane late last June, in what was a powerful symbol of Kurdish resistance.

“He [Brett McGurk] visits Kobane at the time of the Geneva talks and is awarded a plaque by a so-called YPG general?” Erdogan told reporters on his plane while returning from a trip to Latin America and Senegal, the Beser Haber newspaper reported.

“Is it me who is your partner, or the terrorists in Kobane?” the Turkish president said, adding that both the PYD and the YPG are “terrorist organizations.” Ankara considers them to be part of the PKK, banned in Turkey as a terrorist group.

According to US officials, the trip appeared to be the first of its kind to northern Syria since 2013. It took place after the YPG’s political wing, Syria’s Democratic Union Party (PYD), was excluded from new peace talks in Geneva. Ankara had threatened to boycott the talks if the PYD were invited.

The conflict between the Turkish government and Kurdish insurgent groups demanding greater autonomy for the large ethnic group has been continuing for decades. With several failed ceasefires between the sides, Ankara has been blamed by a number of human rights groups for putting civilian lives at risk in Turkey’s mainly Kurdish southeast.

In August, Ankara launched a ground operation to crack down on Kurdish fighters linked to the Kurdistan Workers’ Party (PKK). The violence ended a two-year truce with Kurdish militants fighting a guerrilla war for independence.

“Turks have a phobia of Kurds because they are scared of their Turkish Kurds, some 20 million of them living in Turkey,” Abd Salam Ali, the Kurdish Democratic Union Party’s representative to Russia, told RIA Novosti, adding that “Kurds have interfered with Erdogan’s plans in Turkey.”

“Islamic State has military bases in Turkey, and is using it as a corridor. Turkey currently plays a role similar to the one Pakistan played in the 1980s. When the Soviet forces were stationed in Afghanistan, jihadists arrived there through Pakistan, along with the money and arms,” Abd Salam Ali noted.

“Now Turkey is exactly the same corridor [for militants in Syria], and it plays its own game. But Kurds appeared to stand in [Ankara’s] way. They have forced IS away from Rojava [also known as Syrian Kurdistan]. There’s only one piece left, a 90km-long territory between the Kurdish towns. If we force IS out of there and reconnect the Kurdish cantons, Turkey won’t be able to influence [the situation in Syria].”

Late last month, President Erdogan once again refused to search for a peaceful solution to the conflict, which began back in 1984 and has taken at least 40,000 lives, mainly Kurds. He pledged that “those with guns in their hands and those who support them will pay the price of treason,” referring to the Kurdish militants, deemed terrorists by the government.

According to Turkey’s General Staff, the number of PKK members killed during military operations in the southeastern districts of Cizre and Sur reached 733 on Sunday. But according to Amnesty International estimates, at least 150 civilians, among them children, have been killed during the Turkish operation, with more than 200,000 lives put at risk.

Turkey’s security operations in the mainly Kurdish southeast resemble a “collective punishment,” the human rights watchdog said last month. Amnesty slammed the international community for choosing to turn a blind eye to what Ankara has been doing to the Kurds.

“While the Turkish authorities appear determined to silence internal criticism, they have faced very little from the international community. Strategic considerations relating to the conflict in Syria and determined efforts to enlist Turkey’s help in stemming the flow of refugees to Europe must not overshadow allegations of gross human rights violations. The international community must not look the other way,” John Dalhuisen, Amnesty International’s Europe and Central Asia Program Director, pointed out.
Up to 21 academics were detained by Turkish authorities in mid-January for signing a petition demanding that Ankara abandon its military crackdown on Kurdish rebels in the southeast of the country. The petition denouncing Turkey’s military operation against Kurds was signed by as many as 1,200 academics. Turkish President Recep Tayyip Erdogan said they all sided with the Kurdish militants, who are considered terrorists by the government. “Unfortunately these so-called academics claim that the state is carrying out a massacre. You, the so-called intellectuals! You are dark people. You are not intellectuals,” he stated.