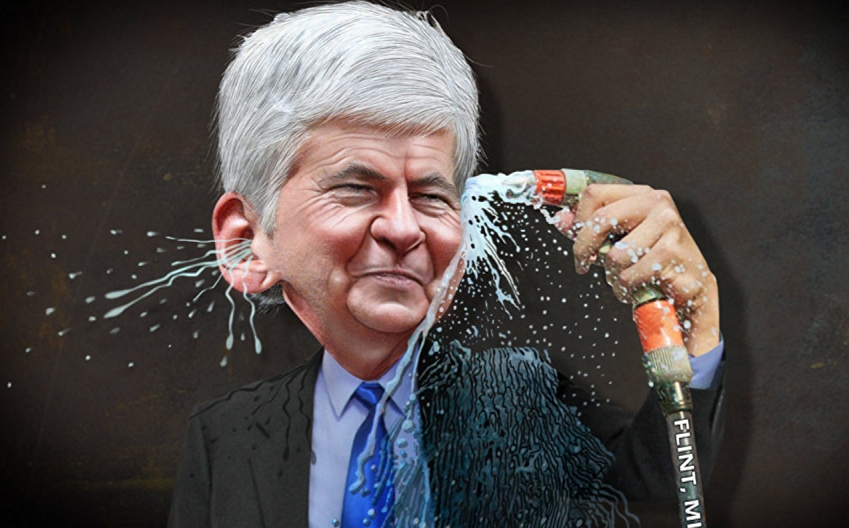 Emails obtained by the Flint Journal reveal local health officials accusing Governor Rick Snyder and the Michigan Department of Environmental Quality of withholding lead testing results from city schools as the governor worked on ways to present the information to the public.

At an October 8 press conference, Governor Rick Snyder announced that three buildings within the Flint School District tested above the federal safety limits for lead in their drinking water. Freeman Elementary School was found to contain six times the federally allowable level of lead. This was the first local health officials heard of the contamination, despite the fact that Snyder knew about it on October 2 — meaning that for six days he allowed school children to continue drinking the toxic water.

This contradicts Snyder’s office’s claim on February 10 that he did not withhold information and shared it quickly.

“MDEQ explained that the Governor prohibited releasing all Genesee County lead results until after the press conference,” wrote Jim Henry, Genesee County’s environmental health supervisor. “They should have alerted the schools and they didn’t.”

On Wednesday, the Governor’s office denied withholding the information.

“The email seems to reflect someone summarizing a discussion at a meeting, and we are unsure what actually was said there,” Snyder Press Secretary Dave Murray told MLive. “We do know that the testing began on Oct. 2, it took some time to test 13 buildings, action was taken immediately and the Governor held a press conference in Flint to discuss the results on Oct. 8. There was no delay during that time period.”

“People were quickly informed of the results in the schools, and that action on the fixtures with elevated levels was taken immediately.”

The emails, on the other hand, show that the delay on the press conference was not the only hold up for providing health officials with information about the contamination in the schools.

© FLICKR/ PETRAS GAGILAS
‘Federal Law Was Not Followed’: Avoiding Flint’s Poisoned Water Crisis Would Have Cost Less Than $100 a Day

On November 3, Henry emailed the DEQ’s Laboratory Director George Krisztian and requested all lead testing results from Freeman Elementary, saying that his email should be treated as a FOIA request. Krisztian declined the request however, claiming that the samples collected from the school on October 24 presented an “incomplete picture of the plumbing system” and that additional samples collected on October 31 wouldn’t be ready until November 4.”I am hoping to either have a conference call or a meeting in Flint with all the partners to review the results and discuss how we will present the information to the public,” Krisztian wrote.

On November 6, Henry sent out another email stating that Krisztian told him that he was instructed to withhold the information until the FOIA deadline of Dec. 2.

“MDEQ reminds me of a stubborn 2yr old child,” Henry wrote. “Instead of doing what is right, they’ll willfully take another spanking just to be defiant.”

Luckily, county health officials took action instead of waiting around for the results to be released to them, and Henry stated on the 6th that he was directing county health staff to visit Flint schools, meet with administrators and make sure no one was drinking the water to reduce the risk to students.

“The Michigan Department of Environmental Quality informed Flint Community Schools that of 31 samples taken at the school on Oct. 24, samples from nine fixtures indicated water with lead exceeding 15 parts per billion, the threshold considered safe by the federal government,” the district wrote in its press release on the 9th. “The MDEQ informed FCS that the high lead levels were not detected in plumbing, but only in nine faucets and heads of drinking fountains.”

Meanwhile, Snyder has taken to Facebook to adamantly deny the contents of the emails:

“Gov. Rick Snyder never ordered a state agency to withhold information about lead testing in Flint schools, but instead quickly announced the results of water tests in 13 school buildings at a press conference in the city on Oct. 8… The Governor’s Office unequivocally denies allegations published online by MLive on Wednesday that Snyder ordered the Department of Environmental Quality to withhold results of testing in the schools.” Instead, he said, “As soon as the water samples were tested and the results verified, Snyder announced the results at a press conference in Flint on Oct. 8.”
On Wednesday, Snyder declined to testify before a Congressional hearing on the crisis.Flint’s water poisoning began in April 2014, when the city stopped receiving its supply from Detroit, instead shifting to water taken directly from the Flint River, a source known to have a high corrosive salt content. Corrosive salts in the water damaged the pipes, which contain lead, causing that material to be released into the water, and contaminating it.

In October, the state changed the city’s drinking water source back from the polluted Flint River to the Detroit water system, but warned that the water is still not safe.

The effects of lead-poisoning cannot be reversed. Researchers at nearby Hurley Children’s Hospital have identified a “rise in blood lead levels of children less than 5 years old” who live in the area. An outbreak of Legionnaires disease, which caused 10 deaths, is also suspected to have been a result of the toxic water.