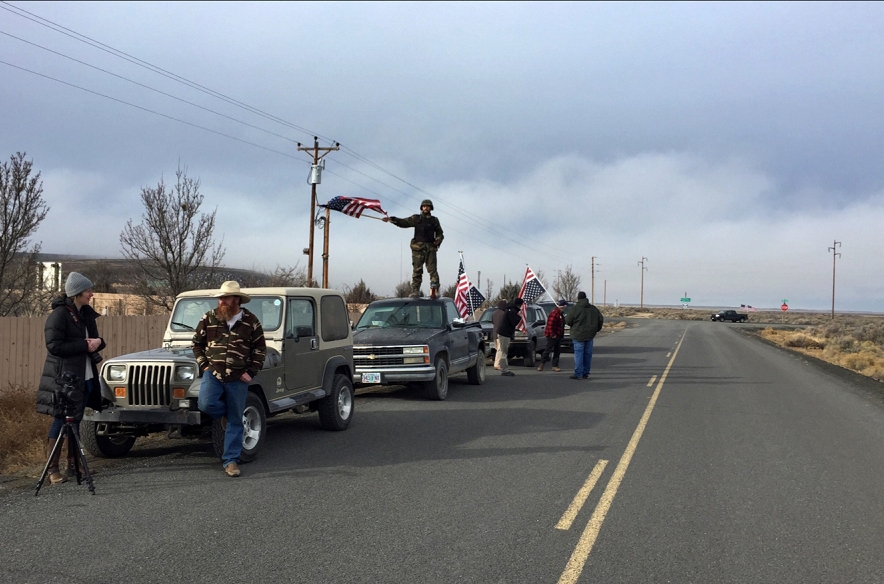 The last four remaining activists occupying a federal wildlife refuge in Oregon hinterlands have surrendered, ending the 41-day standoff with local and federal authorities. One of them held out for two hours, rambling on the internet before surrendering.

David Fry of Ohio, Jeff Banta of Nevada, and Sean and Sandy Anderson of Idaho have insisted they would only surrender if the government did not press charges.

Negotiations over their surrender to the federal agents were being mediated by Nevada state assemblywoman Michelle Fiore and televangelist Franklin Graham. An activist has broadcast the talks via a YouTube live stream.

Fiore sought to calm the occupiers down, as she and Graham drove up to the refuge in the company of FBI agents.

“America is watching,” she said. “Nothing’s going to happen.”

Fiore and Graham told the occupiers that their struggle would continue after the surrender, “we’re just switching locations.”

“We don’t need violence, because we don’t live in a kingdom,” KrisAnne Hall, a lawyer and constitutional activist who called into the livestream, told the four occupiers at the refuge. “This is not a surrender,” she added, but a change of venue in the ongoing struggle.

Reverend Graham told the protesters he was looking to give them a “great big hug.”

“We haven’t bathed in a couple of days, so I hope you don’t mind,” responded Sean Anderson.

At one point, Fiore was advising the occupiers to use the restroom and drink plenty of water and caffeine, apologizing for sounding “motherly.”

“We’re hoping to stop at Denny’s,” responded Sean Anderson, chuckling. He said the four would like to be considered“honorary Marines” for standing on the “battlefield” for so long.

Sandy Anderson, the only woman among the four holdouts, made an appeal to all Americans: “Read your Constitution, just like reading your Bible.”

The Andersons were the first to walk out, with Sean holding up the American flag as he did so. Banta went out next, with Fry describing the scene over the livestream.

Things then took a turn for the worse, as Fry refused to surrender. Hall and Seim tried to talk him into giving up, without much effect.

“I declare war against the federal government,” Fry responded. “Liberty or death.”

“It is harder to live for liberty than to die for it,” Hall argued.

“I’m taking a stand,” Fry said, rebuffing all appeals and calling Hall and Seim a “bunch of yappers.” He then said he wanted a pizza, and threatened to commit suicide, saying he would never go to prison and be raped.

“All I need is my marijuana,” Fry wailed at one point, complaining that voters of his home state refused to legalize pot.

“I don’t care about the movement anymore,” he ranted. “If you cared for it, you would have been here.”

When Seim and Hall urged him to walk out of the building, Fry responded he was in bed.

“As long as nobody attacks, or tries to get in here, no one’s going to get hurt,” Fry told the FBI, as the live stream picked up his words. He threatened to commit suicide if the federal agents tried storming the refuge.

“I cannot help you if you won’t listen,” Hall pleaded.

Fry responded with a stream-of-consciousness monologue, touching upon UFOs, the government’s alleged suppression of green technology and “chemically mutating” the population, US atrocities against Muslims, and the futility of voting in a system controlled by bankers.

At one point, he told the FBI he would give himself up if they all shouted “Hallelujah.”

“And now I’ll eat one more cookie and have a cigarette,” Fry said at around 11 a.m. local time. He did just that as he walked out of the building, surrendering to the FBI. 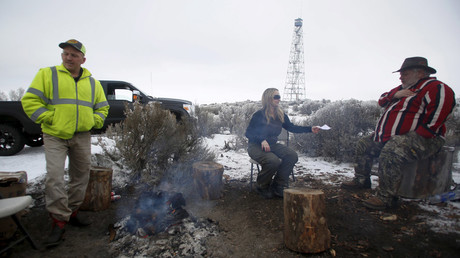 5 things you need to know about the Oregon standoff

What was it all about?

The standoff began on January 2, as a protest against the federal government’s treatment of two local ranchers, Dwight and Steven Hammond. A dozen or so armed ranchers and self-styled militiamen, calling themselves Citizens for Constitutional Freedom, took over the refuge and renamed it Harney County Resource Center.

The group was led by Ammon and Ryan Bundy, sons of the Nevada rancher Cliven Bundy, who successfully challenged the Bureau of Land Management in 2014 in a dispute over grazing rights. The Bundy brothers called on the federal government to cede the lands around Lake Malheur to the local ranchers and argued their actions were in line with the US Constitution.

After keeping a low profile for several weeks, the authorities escalated their response on January 27, arresting the Bundy brothers and five other supporters and charging them with conspiracy to interfere with federal officials. The occupiers’ spokesman, Robert ‘LaVoy’ Finicum, was fatally shot by Oregon State Police at a roadblock.

Ammon Bundy has since called for the remaining members of the group to leave the refuge and continue their fight in the courts. Several who have done so were arrested and charged with conspiracy as well.

Cliven Bundy was arrested Wednesday night, at the Portland International Airport, on his way to the refuge. The 74-year-old rancher was booked into the Multnomah County jail on conspiracy and weapons charges.

Much of the land in 11 western US states is owned by the federal government. Ranchers, miners and loggers have had to contend with the ever-growing body of regulations, often banning all activity on the land due to environmental concerns. The Bundy-led standoffs in Oregon and Nevada have been the highest-profile clashes between the ranchers and the government since the 1970s “sagebrush rebellion.”