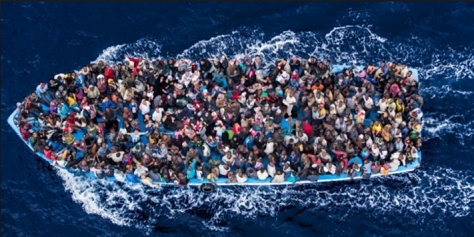 The Business magnate that is Donald Trump has waded into European affairs with his first campaign interview with a French magazine predicting “revolutions” in Europe, another 9/11-style attack and its ultimate collapse.

Trump — who recently valued his fortune at US$10 billion, but which was contested as being less than half that by Forbes magazine — told Valeurs Actuelles:

“What’s happening in Europe can lead to its collapse. It’s dramatic what (Merkel) has allowed to happen, this flood. If we don’t deal with the situation competently and firmly, then yes, it’s the end of Europe.”

He was referring to German Chancellor Angela Merkel’s announcement that Germany’s doors were open to Syrian refugees in a controversial move that originally brought her praise for her humanity but which has come back to bite her politically as the country is now struggling to cope with the 1.1 million refugees who flocked to Germany.

“My German friends no longer know where they are. They can’t believe their eyes about what is happening…they’re desperate,” he told the newspaper, without substantiating his claims in the context of German politics and history.

Against a backdrop of heightened terror threats in Europe — following the Charlie Hebdo attacks and the November 13 Paris attacks in 2015 — Trump warned that there was worse to come. He said Europeans had: “real revolutions ahead of you [… Europe] won’t be spared a 9/11-style disaster.”

The gun-carrying presidential candidate said lives could have been saved on November 13, if ordinary people had been carrying weapons, showing scant knowledge of the strict French gun laws.

“Unfortunately, France isn’t what it was, nor Paris. The only people who had weapons were the killers… it was ‘open bar’ for a massacre.

“Do you really think that if there were people in the crowd, who were armed and trained, things would have turned out the same way? I don’t think so. They would have killed the terrorists. It makes sense.

“I always carry a weapon on me. If I’d been at the Bataclan or one of those bars, I would have opened fire. I would have perhaps died, but at least I would have taken a shot. The worst thing is the powerlessness to respond to those who want to kill you.”

“It was a pigeon shoot, [the killers were] like kids in a candy store,” he said, in remarks which many will take as deeply insensitive and a country that values its freedoms and gun controls.​

This is not the first time Trump has stumbled awkwardly into European affairs. A petition calling for US Republican presidential hopeful Donald J. Trump to be banned from Britain has topped 570,000 — making it the most popular campaign on the government website ever — prompting Trump to accuse British politicians of “pandering to political correctness.”Trump’s call for a “total and complete shutdown” on Muslims entering the United States has prompted huge backing for calls for him to be banned from the UK, where he has substantial interests.

The curiously coiffured US potential president — who once suggested Hillary Clinton wore a wig — once said: “The beauty of me is that I’m very rich.”