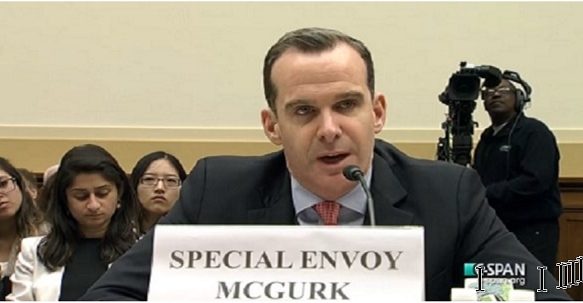 [ Editor’s Note: This is fine example of a Congressional dog and phony show. McGurk several times has the US take credit for what the Syrian-Russian coalition has done in terms of beating back ISIL in Syria, while the US has time and again claimed it was hurting the process.

You also see the committee chairman lapping all of this up as he throws slow ball pitched over the center of the plate for the special envoy to knock out of the park.

McGurk also fails to mention when berating Bhagdad for not working more closely with the Sunnis, the role that the Sunnis played in helping ISIL take Mosul with the devastating losing of equipment which supplied not only their offense in Iraq but also in Syria, which seemed like a dual purpose.

Remember that it took a long time for this equipment to get shipped over long out in the open desert roadways where a lot of it could have been destroyed, but was not. In fact the supply line was virtually untouched until the “redeployment” of US gifted military equipment in Mosul had been dispersed… Jim W. Dean]

ERBIL, Kurdistan Region—The US special envoy to the anti-Islamic State (ISIS) coalition Brett McGurk says that they have formed a new operations command for Mosul and that the city’s liberation campaign has already begun.

“We have now established a joint operations headquarters in Makhmour and that’s where we are going to pull Sunni fighters, Kurdish Peshmerga, Iraqi security forces with our advisors, with Peshmerga commanders, with Iraqi commanders to plan the liberation of Mosul,” McGurk told the US House Foreign Affairs Committee on Wednesday.

“This will be an integrated campaign across multiple lines of effort. It will not be like a D-Day like campaign, it is not going to start on a day certain because it is already starting. We are already cutting off the road access to Mosul. We are conducting air strikes in Mosul every single day.” he added.

He said that the Kurdish Peshmerga will be part of the Mosul operation and that they will get what they need for this battle.

It will not be like a D-Day like campaign, it is not going to start on a day certain because it is already starting.

McGurk told the committee that due to financial crisis the Kurdish Peshmerga has a $400 million monthly gap, with Peshmerga salaries alone standing at about $50 million a month.

“Meanwhile we have to help them with their financial difficulties,” he said.

Virginia Congressman Gerry Connolly agreed, saying, “I think that is essential and we need to provide that financial support because they are willing to fight.”

McGurk urged the Kurds to not let their political difference affect the fight against ISIS, reminding them of their united resolve against the extremist group two years ago.

“When the ISIS wolf was at the door all the Kurds reunited,” he said. “Syrian Kurds, the Iraqi Kurds, everybody was united. Particularly in that moment in Kobani when Kurdish Peshmerga went through Turkey to fight ISIS in Kobani in a historical moment that I was a part of.”

He added that the ISIS presence on the borders poses a continued threat to Kurdistan Region’s stability.

“Our message to them is that this fight is not over,” said McGurk. “The entire southern border of Iraqi Kurdistan Region is controlled by ISIS. So long as that is the case there is not going to be a stable situation there. Our advice is to unite against the threat of ISIS despite the differences.”

“When the ISIS wolf was at the door all the Kurds reunited,

For his part, Chairman of the House Foreign Affairs Committee Ed Royce criticized the US ISIS strategy as not turning the tide against the group after almost two years of bombing.

“Today the administration claims its goal is to degrade and ultimately destroy ISIS, but it still doesn’t have a strategy to get that job done. The tide has not turned in terms of the growing influence of ISIS,” Royce told members of the committee.

The Chairman thought the current number of air strikes currently not enough or effective.

“Militarily, the size of the new special operations force to target ISIS is a fraction of what past efforts have entailed. Our airstrikes are still an average of 23 a day. A fraction of what a serious air campaign looks like,” Royce said at the opening of the hearing.

He also blamed the Iraqi government for continuing to sideline the Sunnis and Kurds.

“And meanwhile the Iraqi government has not been able to deliver as it should,” he told the audience. “The Iraqi Kurds long denied better arms are desperate. Sunni forces, key to any success, do not trust Baghdad to include them in the government and the armed forces in a meaningful way.”

Royce went on to say that there are 50 ISIS-linked groups in 21 countries and in cyber space where they all “spew that deadly message to kill.”

McGurk defended the administration’s campaign against ISIS, saying that the group has lost %50 of its territory in Iraq and Syria combined and 6,000 of its militants killed.

He stressed the significance of US support for local forces on the ground like Syrian Kurds during their fight in Kobani.

I spoke to one of the commanders; he said that without that air drop they would have been overrun.

“I was taken to the site of where the US dropped arms supplies in November 2014 in Kobani,” said McGurk of his recent visit to the Kurdish town. “I spoke to one of the commanders; he said that without that air drop they would have been overrun.”

McGurk, who has been shuttling between coalition countries and local partners in the Middle East for two years added that the US now has a presence in Syria.

“I was able to travel to Syria because we now have a presence in Syria and there is no substitute for this,” he said. “Having a presence on the ground we gain better insights every day and with better insights we can act with more devastating effect.”

He said that a 98km stretch of border with Turkey is ISIS’s “remaining sole outlet to the world,” on which he said he is working with Turkish leaders.

“It is much harder now for ISIS fighters to cross into Syria than it was even six months ago and once they are it is much harder for them to get out,” he explained, adding, “We know from their own publications that they are now telling their fighters, ‘don’t come into Syria. Go elsewhere. Go to Libya.”

McGurk revealed that the US is working “with our partners, a collection of Arabs and Kurds to push on to Raqqa and isolate them in Raqqa and that will be ongoing in the coming months.”