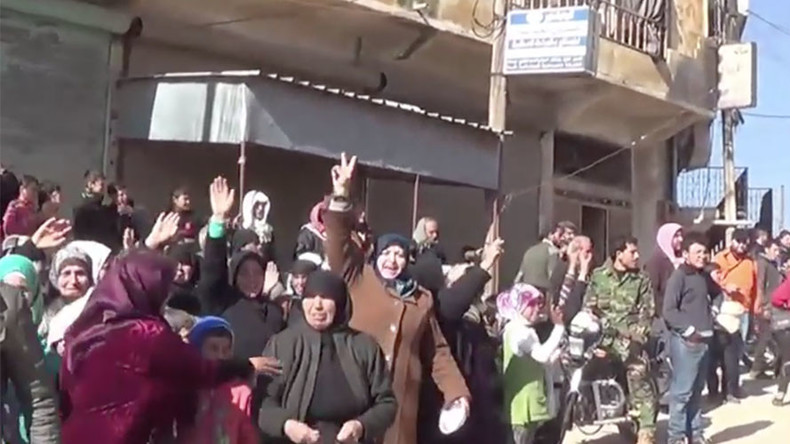 Liberation of Aleppo: What the Western Media is Shy About Showing

[ Editor’s Note:  It is rare to have retired military brass go public like this, but it is a sign that the tide is turning, and these are the people we should be hearing from now to beat back the losers who will still try to torpedo a Syrian peace resolution that does not put their puppets all over the country.

The general tells us that Assad was on his last legs, and we have Moscow’s testimony that he had asked the Russian to come in “with no conditions”, which meant that they would run the military show, as they were putting Russia’s neck on the line.

This thing could still be worse before it gets better. Erdogan and his gang risk prosecution for what they have done if a coup should replace them. And if he tries to order Turkish military action in Syria, it could be what the Turkish military would need for an instant coup.

Those who are losing will go all in to kill any chance of peace. Those of us at VT have been sweating the game changer big false flag attack, the kind used to clear the way for outside intervention by the bad guys to “stabilize” the situation. But the Munich progress on getting humanitarian aid into critical areas could build the trust momentum needed to paint the jihadis AND their backers into a corner… Jim W. Dean ]

Russia was the first to do the groundwork for peace in Syria by launching its anti-IS operation, while both Washington and Brussels lacked any kind of strategy, the ex-chairman of NATO’s Military Committee has said.

Lieutenant General Harald Kujat, who was chief of staff of the Bundeswehr (German armed forces) from 2000-2002 and served as NATO’s Military Committee chairman from 2002-2005, made the comments on the Syrian crisis in an interview with Passauer Neue Presse newspaper.

“The Russians have made the peace process [in Syria] possible,” he told the newspaper on Friday.

The West was at standstill until September 2015, Kujat stressed: “Neither the Americans nor the Europeans had any strategy for a peaceful Syria. Both weren’t prepared to be really involved. The Russians did it and opened a window for political solution.”

The Russian operation was crucial for the Syrian Army on the ground to survive Islamic State’s (IS, formerly ISIS/ISIL) offensive and prevent the entire country from being seized by Islamist militants, he said.

“I gave them several weeks [to last before being defeated]. Then Syria would have collapsed, with IS capturing the country. The next target would be Lebanon, then Israel. It could result in far-reaching consequences for all of us.”

According to Kujat, Russian air support for the Syrian Army’s operation to re-take Aleppo was essential from a military perspective.

“NATO decides nothing in the Syrian civil war with a few AWACS aircraft,” he told Neue Osnabrucker Zeitung. “To really beat IS, ground forces are required. The question is whether NATO really wants to step into this war.”

Russia’s anti-IS air campaign has been frequently criticized by the West, which accuses Moscow of targeting Syrian “moderate” opposition forces and stalling the peace talks. The Russian Defense Ministry has repeatedly dismissed the accusations and has dubbed the US-led strikes inefficient, while Russian diplomats have pointed out that Washington’s Syrian strategy seems to be playing into IS hands.