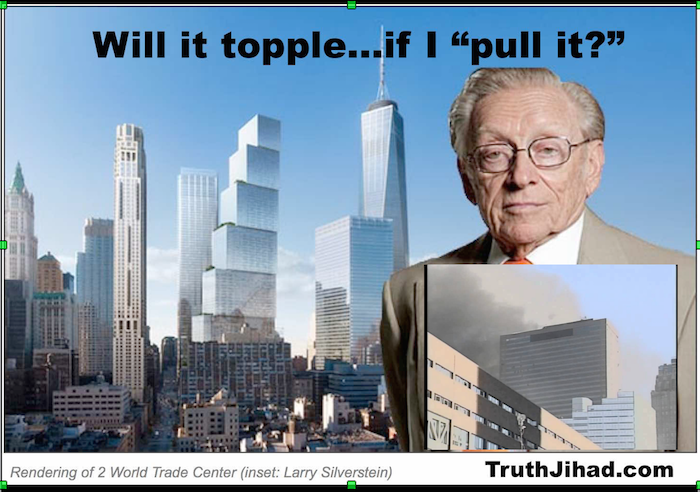 If I had to pay Jim Dean a nickel every time I said “you can’t make this stuff up,” Jim would be richer than confessed 9/11 criminal Larry Silverstein. (Assuming I could find enough nickels.)

“Lucky Larry” is the mobbed-up mogul who bought the condemned-for-asbestos World Trade Center two months before 9/11 with less than $15 million of his own money…then doubled the terror insurance, miraculously survived the attacks due to a suddenly-remembered dermatologist appointment, and later walked away with a 4.5 billion-dollars-in-cash “double-double-indemnity” settlement.

Larry is infamous for confessing to demolishing WTC-7. Despite his confession, which was nationally televised on PBS, “Lucky Larry” later collected $750 million dollars in insurance fraud money for the loss of WTC-7 on the pretext that it “just fell down” because terrorists had used box cutters to blow up the Twin Towers, so it was somehow all their fault that he had decided to “pull it” and then “made that decision to pull, and watched the building collapse.”

Bottom line: Larry Silverstein has a lot of experience with skyscrapers that just fall down—or blow up—for no particular reason. So I suppose it shouldn’t surprise us that Larry is afraid that his new WTC-2 Tower, built with insurance fraud money from the 9/11 controlled demolitions, might also commit suicide:

When Larry Silverstein saw the design for 2 World Trade Center, he did not respond positively, especially given the site’s history. “My first reaction was, ‘Wow, this building looks like it’s going to topple. It’s going to fall over,’ ” the developer said during a panel Thursday on the 40th floor of another one of his buildings, 7 World Trade Center.

Do Silverstein’s words, reported in the NYC real estate paper The Real Deal, suggest that he may be planning to “pull” the new WTC 2 and blame it on Muslims with box cutters? Or will he come up with a more plausible excuse next time?

In the same story, “Lucky Larry” appears to be bragging about his illegal, unpermitted demolition of the World Trade Center when he says that

…his company, Related Companies and Brookfield Property Partners are the only developers pulling their weight in replacing the aging stock.

The old World Trade Center that Larry and his friends (including Bibi Netanyahu) blew up on 9/11/2001 was a prime example of the “aging stock” that had to be “replaced.” The old WTC was:

*Riddled with asbestos that would have cost billions to remove;

*Cursed with antiquated communications infrastructure that was also too expensive to replace;

*Considered an aging eyesore by the community and the City, which had been unsuccessfully looking for an affordable way to demolish the Twin Towers since at least 1990.

So Larry and his friends came up with a plan for “urban renewal by other means.” For the relatively trivial cost of 3,000 lives on 9/11 itself, and several million more in the wars that followed, they were able to tear down some “aging stock” and put up “replacements.”

If Larry’s recent words prove prophetic, and his new WTC-2 does suddenly decide to “topple” or “fall over”  … AND we learn that Larry quadrupled the insurance the day before, and confessed to “pulling it” the day after … the government and its lapdog mainstream media will undoubtedly convince us that it was those evil Muslim terrorists who were somehow responsible.