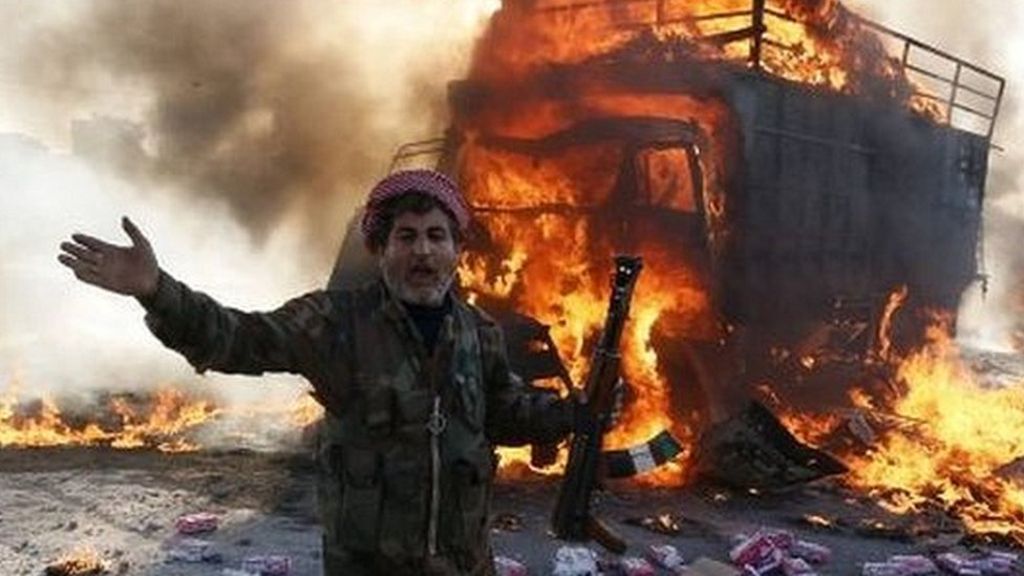 “People never lie so much as after a hunt, during a war or before an election.” – Otto von Bismarck, the Iron Chancellor of Germany

[ Editor’s Note: Here we are on day one after the Munich talks, and while some parties are working on getting humanitarian aid to the most needy places and following up on all the many details to be resolved for a permanent ceasefire, we have parties playing mischief.

Turkey has been shelling the supply road from Aleppo, the last town before the Turkish border all morning, and not seeming to be too concerned about world opinion.

They must have learned that from the Israelis. And then we had a published report that the Saudis will be moving fighters to Turkey to run bombing sorties from there, versus say, doing them in eastern Syria where ISIL targets are plentiful and closer, saving on jet fuel.

But VT is also reporting this morning that a plane load of tactical nukes were flown into the mentioned Turkish base by the Saudis, something they should have know would get out, as there are people dedicated to monitoring such things during times of high tension.

The Syrian Munich talks piece was hard to do, with several rewrites as new information came in over two days. I thank NEO for putting it up this morning, as such stories have to be covered quickly, as this morning news events show.

Desperate countries and leaders being capable of doing dangerous and stupid things, making the job of Defense Dept. and Intel people responsible for having ready reaction plays ready quickly a very stressful one. A big mistake, either an incorrect analysis or missing something can end a career on a bad note.

We are in a very dangerous situation now, with Syria and its rogues’ gallery of regime change and terror brigade supporters. And by that I mean not only for Syria, but all of the players. The EU thought they could play with the Syrian disaster like a cat with a mouse, but the past year has shown that it is pay-the-piper time, as is often the historical case.

Many lives are going to be changed for the worse, and that will include some that will be totally surprised to find themselves included… Jim W. Dean ]

Neither the guns nor the diplomatic barbs have grown silent as the Syrian talks in Munich continue their roller coaster ups and downs.

Diplomatic history is being made in terms of statements being made that can be forgotten the next day; while civilian atrocities are widely reported without a shred of evidence to substantiate them, yet only the framed party seems to care.

John Kerry and Sergei Lavrov reaffirmed in a joint press conference that UNSC resolution 2254 on the formula for the Syrian-Syrian dialogue “does not allow for preconditions.” A day later, we have Mr. Kerry demanding what? … an immediate ceasefire for “humanitarian” reasons, that I will delve into more below.

But suffice to say he and the US coalition partners are desperate to save their dwindling negotiation cards from collapsing under the current Syrian-Arab army offense to free northern Syria and to protect its Turkish borders from continued infiltration.

The Munich talks survived the first day of charges and counter charges to produce the tentative outline of a potential “cessation of hostilities”, “within a week”. This has a strong smell of a wish and a prayer to it, as no one has the slightest idea whether all of these disparate groups will abide by an agreement that has with no real enforcement mechanism.

The term literally means a temporary halt in the violence, freezing positions on the battlefield, but is non-binding; and hopefully would be a prelude to putting a ceasefire together.

We had a recent “agreed upon” evacuation of non-combatants attempted this week in an insurgent-held town in the Damascus suburbs where the buses were shot up and several persons severely wounded; it was all captured on dash cameras.

Jihadis have held Syrian towns and areas hostage as human shields, sex slaves and a labor pool with no calls for humanitarian intervention. Instead we got “Assad must go”.

Kerry would not use the term, so I am going to. It appears to be an “honor system” ceasefire. I think all of you can calculate what the chances of success are. Even Kerry realistically described it as “what we have here are words on paper, and what we need to see in the next few days are actions on the ground.”

But it does include an “understanding” for getting emergency supplies into the areas under siege, with the Syrians and Russians reportedly being tasked to do this initially with air drops. Someone did not trust the US coalition to do it, due to its record of dropping guns and ammo to its proxy forces.

A UN task force is supposed to “ensure” that humanitarian access is granted to all sides. I can’t imagine how they can do that, but I salute the brave UN people willing to go in harm’s way, and we will see how much of the aid gets stolen to be resold by Jihadis desperate to have some running away money.

During two days of trying to write this moving target article I had a mountain of material come over my desk. It was hard to believe what I was seeing, such as this morning starting off with the usual claim of the Russians bombing hospitals in Aleppo, when the past reports of them, even by the French doctors’ NGO, had been discredited. Western media seemed too lazy to dream up new lies. Even some of the remarks by diplomats were what you would expect to see at a cage fight event.

In my many years of covering evolving war fiascos, the word “panic” climbs to the top of the pile to describe the level of discourse seen here. The anti-Assad backers of the Syrian opposition and terrorist brigades were simply beside themselves, not only about the success of the Russian air campaign, but the Damascus amnesty program that has witnessed thousands of opposition fighters surrender and even join the Syrian army offensive.

Shifting Alliances of the Anti-Assad Fighters

The myriad of anti-Assad groups has always been a musical chairs event, as they take turns fighting each other and then forming new coalitions for better pay and better territory to loot. I will share one gem of an example about the YPG Kurdish fighters and allies that took the Mannagh air base Friday morning, north of Aleppo, just south of Azaz, in heaving fighting.

Not only can supplies be flown into this key location, landing and taking off over Kurdish held territory to the west, but two artillery batteries could command all the roads to Turkey and support an eastern advance with the help of tactical drones. The news was a crushing blow to the insurgents. Their back door is closed, even for evacuating wounded.

The victorious group is called the Syrian Democratic Forces (SDF), formed this past October in the Kurdish northeastern region, and made up of a dozen or more factions. But it gets better, as the fighters are mostly from the YPG units AND the Free Syrian Army.

Their fighters include Christians, Arabs and about 500 foreign fighters and already are having groups in Aleppo and Idlib pledging allegiance to them. Welcome to the shifting alliances in the insurgent world.

And why, might you ask, would a mixed group like this band together? For many of them it was because they wanted to join the Syrian coalition so they can now pass along the location coordinates of anti-Damascus groups and bring the Russian bombers down on those heads and not their own.

This is what we call a major clue of the anti-Assad forces breaking up, and it’s every man (or group) for themselves at this point, with many not wanting to be on the losing side.

The history of irregular warfare is filled with such events, especially when the tide turns against a particular side and the survival instinct kicks in hard. We are seeing stories of ISIL in Iraq executing groups of their own for desertion, or for planning to desert or to overthrow a local leader. They are not called bands of cutthroats for nothing.

After the US charged Russia with bombing the sick and wounded, old people and babies in Aleppo the Russians claimed they had no sorties there at all and then reported that two A-10 warthogs crossed over from Turkey and attacked targets in Aleppo. While the US gave no proof of their claim, the Russians have the exact time of the border crossing, a strong hint that they have the radar track recorded

Erdogan is in over his head

Over the past two days, Erdogan was nutting out on the American support for the Syrian Kurds. The news of Damascus flying in weapons and ammo to the eastern Kurds seemed to put him over the edge because the US Special Forces are also there, and training young soldiers how to use notepads to call in artillery rounds on ISIL infiltrators.

We had the Saudis claiming that not only was their plan to put troops into Syria a guaranteed event, but that they were also going to hold joint military exercises with Turkey.

I wonder if they are going to hire mercenaries to do that, like they have been using in Yemen, as regular Saudi troops, especially infantry, have  demonstrated no ability for real combat; the Saudi army is what many view as an expensive palace guard.

We will pray that all those Syrians suffering in the damp and cold winter will get some respite from the hell they have been through. We hope that some wise men appear on the scene to replace the pretenders who have contributed to this tragic war in Syria, with the US coming at the top of the list, seeming to have no shame in destroying yet another country that demonstrated no threat to the American people whatsoever.

A pox be upon all the war makers and life takers who do their evil deeds for profit and power. May they all enjoy the fate they deserve, so others may be spared.