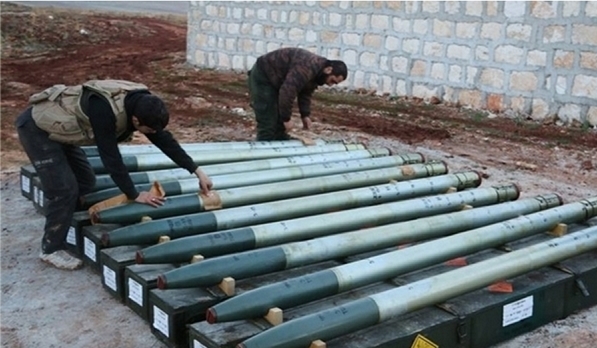 TEHRAN (FNA)- Saudi Arabia and Qatar have dispatched new cargoes of arms and ammunition, including advanced missiles, to the militant groups in Aleppo to help the terrorists defend their positions against the government forces’ advances in the Northern battlefields of the country.

The terrorists of Harakat Ahrar al-Sham, the Free Syrian Army (FSA), al-Shamiyah Front, and Nouriddeen al-Zinki received a new shipment of advanced missiles from their allies in the Persian Gulf on Friday in order to help combat the pro-government forces that are advancing in the Aleppo province’s Northern battlefield.

Saudi Arabia and Qatar have equipped the hard-line militant groups with 122 mm grad rockets; these missiles possess a larger impact and farther range than the current missiles in their arsenal.

The traditional 122 mm grad rocket can travel as far as 400 km, making it a lethal weapon to fire towards government-controlled sites that the militants currently do not have access to on the ground.

On Friday, the Syrian air force dropped leaflets over the militant-held Northern parts of Aleppo province, giving the Takfiri terrorists yet another chance to lay down their arms and surrender to the army.

The Syrian air force aircraft, as a part of their mission over militants’ positions in Hraytan North of Aleppo, dropped the leaflets, the practice that the government follows in parallel with hitting the militants.

The leaflets also called on the civilians in Hraytan to refuse giving any shelter to the militants.

The move comes as the Syrian army has gained momentum in its advances in the Northern province of Aleppo.