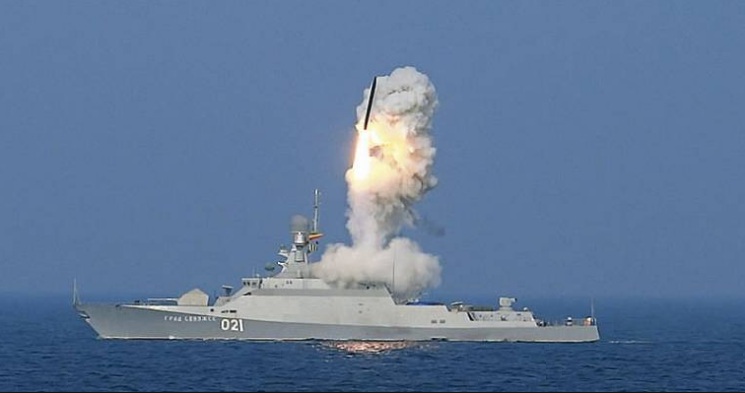 [ Editor’s Note: Timing, timing… the Russians are getting these ships out to the Med maybe before a shooting war might close the Black Sea route, which would be a big, but not terminal logistics problem for Russia. Putin will play a cool hand here as always.

When the Russian tourist plane was taken down in Egypt by unknown attackers (the story has totally disappeared as to what the final black box determinations were), I wrote that Moscow would seek its revenge on the Syrian battlefield, which we are watching happen now before our very eyes.

I predict that Putin will let others overplay their hand and make the big mistakes, even if he has to take some casualties. Through all of this, he and Lavrov are the most highly respected statesmen on the planet… Jim W. Dean ]

The Russian Navy has dispatched a new warship equipped with cruise missiles to the Mediterranean, with reports saying that it is bound for Syria.

“Today, the Zeleny Dol missile corvette and the Kovrovets minesweeper of the Black Sea Fleet left [the Crimean port of] Sevastopol to begin carrying out tasks as part of Russia’s permanent naval task force in the Mediterranean,” Vyacheslav Trukhachev said.

The Russian official added that the patrol ship will conduct tasks in the Mediterranean for the first time. The Russian news agency further quoted a security source in Crimea – where the Black Sea fleet is based – as saying that the corvette will join the Russian warships operating off the coast of Syria in the coming days.

“The goals of the ship are not public but considering that it is carrying long-range cruise missiles, its participation in the military operation should not be excluded,” the source said.

The report comes as on Saturday, Russian Prime Minister Dmitry Medvedev warned against any ground intervention in Syria by countries in the US-led coalition allegedly fighting Daesh Takfiri group, saying it would unleash another war.

“Don’t threaten anyone with a ground operation,” he said in a speech at the Munich Security Conference, stressing that Moscow is doing its utmost to pave the way for a lasting peace in the conflict-stricken country.

Saudi Arabia, the United Arab Emirates (UAE) and Bahrain have recently expressed willingness to send troops to Syria to join the US-led campaign.

“It is important to save a united Syrian state, preventing it from falling apart into religion-based [fragments]. The world can’t afford another Libya, Yemen or Afghanistan. The outcomes of such a scenario would be disastrous for the entire Middle East,” Medvedev said.

Russia launched its own aerial campaign against the Daesh Takfiri terrorists and other militant groups in Syria on September 30, 2015, upon a request from the Damascus government. The air raids have expedited the advances of Syrian forces against militants.

The Russian strikes have drawn criticism from Western governments and their allies in the Middle East, which have been supporting the militants operating in the region

The foreign-sponsored conflict in Syria, which began in March 2011, has claimed the lives of some 470,000 people, according to the Syrian Center for Policy Research.