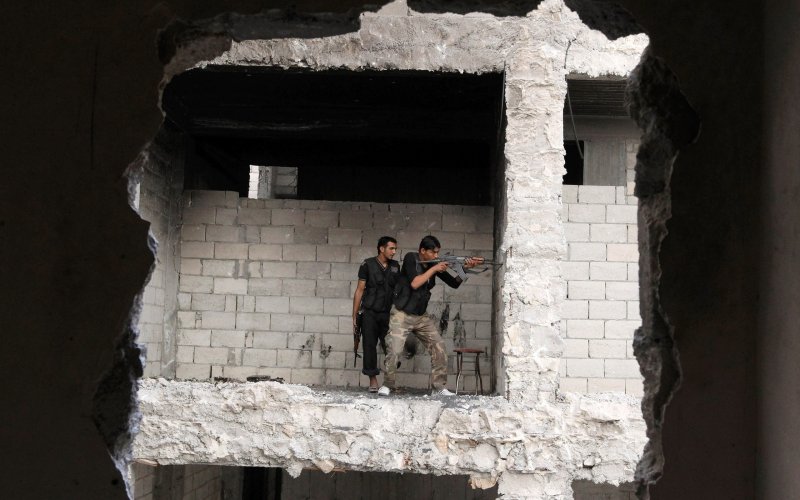 [ Editor’s note:  The origin of this story is the Newsweek group owned by Israeli agent Jane Harman. ]

Iraqi militias who once fought ISIS with U.S. help are now working with Russian and Iranian forces to crush American-backed rebels in the strategic Syrian city of Aleppo, two defense officials have told The Daily Beast.

At least three Shia militias involved in successful battles against ISIS in Iraq—the Badr Brigade, Kata’ib Hezbollah, and the League of the Righteous—have acknowledged taking casualties in fighting in south and southeast Aleppo province.

U.S. defense officials confirmed to The Daily Beast that they believe “at least one” unit of the Badr Brigade is fighting in southern Aleppo alongside other Iraqi militia groups. Those groups are backed by Russian airpower and Iranian troops—and all of whom are bolstering President Bashar al-Assad’s Syrian Arab Army.

Reports on social media say the Iraqi militias in Syria are armed with U.S. tanks and small arms they procured on the Iraqi side of the border. Those reports could not be independently confirmed.

The presence of militias fighting on behalf of Assad—a dictator that the U.S. has pledged to depose—is yet another reminder of the tangled alliances that the United States must thread as it pursues seemingly contradictory policies in its battles against the self-proclaimed Islamic State. In Iraq, these Shia militias were battling on behalf of the U.S.-backed government. In Syria, they are fighting against an American-supported rebel coalition that includes forces armed by the CIA.