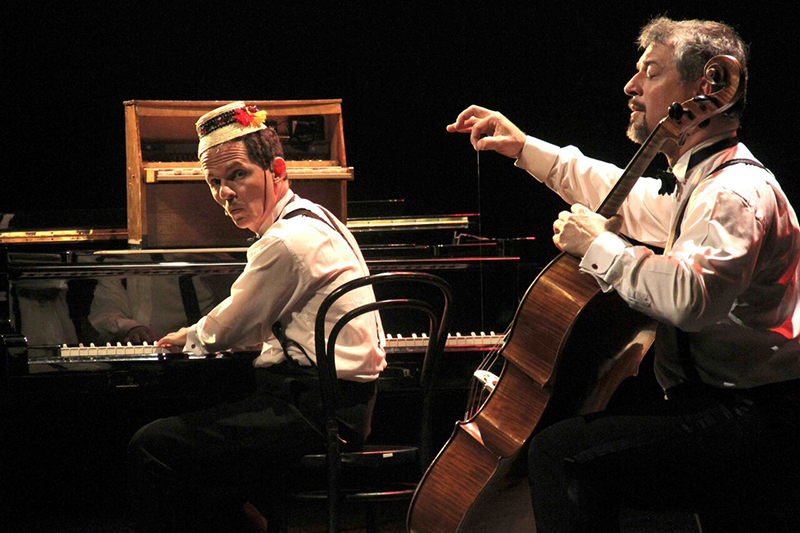 In the Palais Royal Gardens near the Louvre, this magnificent theater  built in 1831 in the neo-Louis IV carved and guilded style, a historical monument since 1930, is a  magnificent setting for plays and concerts.

In this elegant theater Dual Opus 2, a hilarious musical comedy  featuring Paul Staicu ,an accomplished pianist and Laurent Cirade, an accomplished celloist  perform a remarkable standoff as each battles the other.  These two musicians have been performing together for fifteen years and have given over 1500 concerts in over 33 countries. This performance in Paris is directed by Agnès Bouray. These musicians are very funny and the audience laughs as they start off seriously playing the piano and the cello  and then interrupt each others performance with various guests as in a real dual. This is a very unusual comedy using classical and contemporary music played well but with gestures and battles.  They act as clowns and one waits to see how they will interrupt each other.

Using a piano and a cello they use various other materials such as a fishing line and a saw to delight the audience using music of all styles from Barry White, Enrico Morricone, the Mozart Velvet Underground, Johann Strauss and the Bee Gees.

It is wonderful how they play four-hand cello, the piano while lying on the ground and even perform handcuffed. One constantly interrupts the other from performing and the audience laughs at this great comedy. It is suitable for all even those who do not understand French. For those visiting Paris it is great to see this musical comedy.