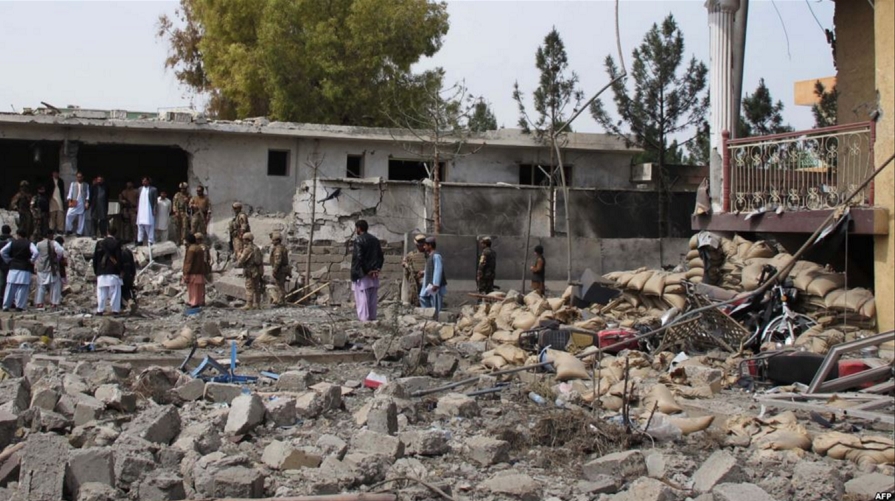 Helmand is the Red Zone where severe war is going on everyday; most of the American and British generals and high-ranking military officials are familiar with Helmand’s Sangin, Nad Ali and Marja as well as the people are familiar with the War of Vietnam and its name.

Musa Qala is the place where the Taliban allowed Britishes to take out of their siege and leave the area after they made a deal with and accepted the conditions of the Taliban.

In the last few months, the war of the Taliban has extended to Lashkargah, the provincial center of Helmand province; some high level government officials sent their family members to Kandahar and Nimroz and also they, with different excuses, left Helmand for Kandahar or Kabul.

The head and members of the Helmand Provincial Council were coming out on TV and were calling on the central government (Kabul) to take care of the situation in Helmand seriously.

The representatives of Helmand in Wolesi Jirga (the lower house of the Afghan Parliament) and Meshrano Jirga (the upper house of the Afghan Parliament) clamored, held meetings with senior military officials and promised them with providing 1000-2000 volunteered fighters; however, after they attended Helmand, the government was waiting for their promises to become fulfilled, but lonely Mullah Shir Mohammad Akhund was able to gather about 100 fighters; on the other hand, Jabar Khan and others were not able to find even 50 fighters.

After the government of Dr. Najeebullah collapsed, Jabar Khan went on side of Mr. Hekmatyar, but he was not welcomed and not supported as he per his wishes. At that time, it was said the Gen. Dostum and Jabar Khan are the two important commanders of malitia in North and South of the country respectively.

During the Civil War, Jabar Khan, for his life and his interest in war, preferred to be on the side of Dostum in the North. A lot of former leftists (Ex-Communist parties Khalqis and Parchamis) became appointed in the Karzai Administration which was established forcibly by the United States.

Jabar Khan started his new job as the advisor to the UN political office in Afghanistan (UNAMA) and was receiving 1500 USD per month as the salary. He had poor living situation at first, because life in Kabul is not that much easy, it requires expenditure.

He became elected as the representative of people in Wolesi Jiga for he had worked in UNAMA. He severely criticized the Karzai Administration; however, after a large portion was given to Dostum and leftists in the Ghani Administration, Jabar Khan supported the government and requested for reforms.

The main point is that appointments in high positions is beyond the power of the government; it looks so hard to appoint a high-ranking general in the Defense or Interior Ministries without the satisfication of U.S. and Britain.

Naeem Khan, the former provincial governor of Helamnd that had Jihadi background was dismissed by Ghani and former leftist, Mirza Khan Haidari became appointed instead of him; Ghani did not become content with that, and appointed former Khalqi, Sarjang, as the new Chief of Helmand Police instead of former leftist Chief of Police, Mullahkhil.

When Sarjang was being introduced to police, he said that he would turn Helmand into the graveyard for the Taliban. Mullahkhil was better than him, and once he was seiged by the Taliban for some days in Marjah and his beard was became longer due to lack of shower and suitable situation in there; however, Sarjang has sworn in that he would not go out of the Police Chief Office and Lashkargah, and he would turn Helmand into the graveyard of the Taliban from the office of Helmand Police Chief!

Three months ago, the Taliban seized Babaji locality of Lashkargah, they seized Treekh Nawar of Marja also. They, then, brought the entire district of Marjah except the buildings for the district governor office and the district police chief under their control.

Taliban made the first line of war in Chanjeer area of Nad Ali district three months ago, people were leaving Laskargah due to insecurity; suddenly, the Taliban stopped their advancement toward Lashkargah. Neither the Taliban nor the government had advancement in Nad Ali since last three months. Local people say that both of the sides are given order to take their positions and that they are not allowed to do further advancement.

The first fruit of his arrival was that the Taliban took control of one of the biggest Military base, the bazaar of Sangin District and neighboring areas, and the Taliban are still advancing. Also, the casualties of governmental forces increased and even high-ranking officials including generals became killed in this war.

Last week, Jabar Khan, in an interview with domestic media, said that the interference of Pakistan and Iran and lack of coordination between security units are the main obstacles in front of security. Jabar Khan, before attending Helmand and even when he was performing his duty as the Helmand Operative Chief during the Communist Régime, was saying that Pakistan and Iran make interventions; whether he did know or did not want to know about the situation before attending Helmand; now, as the former pro-Russia failed general feels his defeat under the parasol of NATO tells such things.

Jabar Khan had said that he would bring coordination between the security bodies; in the case, both the Chief of Helmand Police and the provincial Governor are leftists, so who make problems to them, or he tells theses things in order to cover his failure.

Of course, Jabar Khan knows that Mullah Shir Mohammad Akhund, whose father Mullah Mohammad Rassoul Akhund had fought Khalqis and Parchamis several times, would never accept the leadership of Jabar Khan Noorzai on Helmandis, especially on Alizai tribe, the former leader of Hizb-i Islami, Hafeezullah Khan, who became the governor of Helmand after Mujahedeen took control of the government and killed his 70 comrades by Jabar Khan and Khans, would never accept the leadership of Jabar Khan on Barakzai tribe, Mallem Mir Wali Khan that was the famous commander of Hizb-i Islami would never help Jabar Khan.

The problem of Jabar Khan, that he would admit it later, is that the former Mujahedeen in the ranks of Afghan National Army (ANA), Afghan National Police (ANP) and Afghan Local Police (ALP), considering his background, do not help with him.

The ANP or ALP forces that are sent to Sangin from other areas, say heavenly goodbye to their friends like they would not return alive again; a graveyard named “Sangin” built for fallen security forces in Laghman; when the local people in Nangarhar’s Kot and Kama localities see the bodies of fallen governmental forces say that they would be killed in Sangin or Musa Qala’s war.

There is a graveyard for famous ALP and ANA commanders fallen in Musa Qala and Sangin’ wars in Bolan locality of Lashkargah.

If pro-Russia defeated generals hope to win the war for NATO should think of that how can the son of those who had defeated them yesterday would fight for protecting the interests of NATO and power of former leftists under their command.

Prof. Sayyaf, Dr. Abdullah, Ismail Khan, Ahmad Zia Massoud and Arghandiwal shout that the government has islolated Mujahedeen and that security cannot be provided without the assistance of Mujahedeen; although, this   war cannot be won untill it is for realizing the interests of foreigners; neither the former Khalqis and Parchims not the former Mujahedeen can win this war going on for the interests of NATO, and the Taliban cannot win this war completely, either. It is time to think of the situation of Afghan Youth, follow the path to real/truthful peace. It is for the disputes of former Mujahedeen and Taliban that the government is once again fallen in hands of former pro-Communist and present pro-American Khalqis and Parchamis.

Until the former Mujahedeen, former Khalqis and Parchamis, Afghans committed to Westerns’ interests and also the other side of the war (Taliban) did not get use of tolerance, and flexibility in the Afghan-related issues and common life, we would enter another long-term war. Hoping that the entire side involved in the war accept each other as Afghan and consider the Afghan issue as their own domestic problem, become agree with each other, and, unitary, tell the NATO and foreign forces to leave the country because your presence is the source of entire problems in Afghanistan.

The presence of NATO troops elongates the Afghan war, and make it to continue for another decade and the Taliban, former Mujahedeen and former Khalqis and Parchamis and, to a large extent, the ordinary Afghan folks would be victims of this war, then.