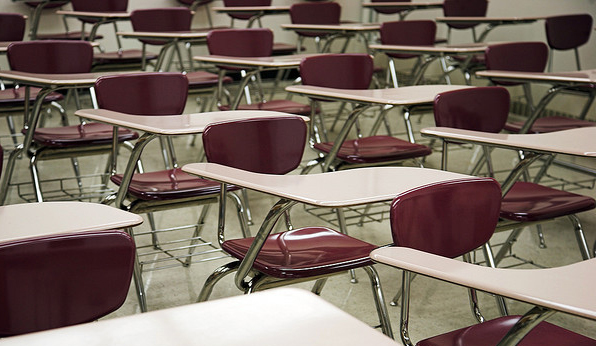 Thousands of New Jersey high school seniors may be taking the military’s enlistment exam to fulfill a graduation requirement because they opted out of the controversial PARCC tests when they were juniors.

Nearly 50,000 New Jersey high school seniors are required to take an alternative end-of-year assessment because they opted out of taking the Partnership for Assessment of Readiness for College and Careers, (PARCC) test last year. School officials say “a significant number” of these students will now likely have to take either the College Board’s ACCUPLACER test or the Armed Services Vocational Aptitude Battery, (ASVAB) as approved pathways to graduation. The costly ACCUPLACER is a product of the College Board, while the free-of-charge ASVAB is the military’s enlistment test that is given to 650,000 students in 14,000 schools across the country. Its primary purpose, according to military documents, is to procure leads for recruiters.

The staggering numbers of New Jersey 11th graders who opted out of taking the PARCC test last year may have done so as a result of a coordinated campaign. South Brunswick New Jersey’s Board of Education Vice President Dan Boyle explained during a board meeting last month, “Throughout the state, there are an inordinate amount of students that are not qualified to graduate,” Boyle said at the time. “That is almost directly a result of the (PARCC) opt-out movement.”

The robust testing opt-out movement in New Jersey and throughout the country has targeted the corporatization and standardization of American education. United Opt Out National serves as a focal point of resistance to corporatized education reform. The group demands “an equitably funded, democratically based, anti-racist, desegregated public school system for all Americans that prepares students to exercise compassionate and critical decision making with civic virtue.”

The group plans an Opt Out Conference in Philadelphia, February 26-28, 2016 with noted speakers Chris Hedges, Jill Stein, and Bill Ayers.

Even as students opt out of these outrageously expensive testing regimes, Pearson’s PARCC test will cost New Jersey about $108 million over 4 years. Pearson, the goliath textbook/testing company, has $8 billion in global sales. The company got in trouble in New York three years ago when it made a practice of treating school officials to European trips.

The Army, with a keen eye on educational currents, saw the opening and was eager to exploit the PARCC opt-out movement by offering it’s free ASVAB Career Exploration Program in place of the PARCC. After all, the Army reasoned, the kids must have a pathway toward graduation and the Army was honored to provide the “public service”.

In 2014 New Jersey began allowing students to take the ASVAB as a substitute for the PARCC test. To graduate, students are expected to score a 31 on the Armed Forces Qualifications Test, (AFQT). A 31 is the minimum score for enlistment in the Army. The AFQT uses sections of the ASVAB to calculate the score.

Recruiting commanders have widely distributed a Concordance Table that compares AFQT test results to those on the College Board’s SAT tests. According to the table a 31 on the AFQT equates to a 690 SAT composite score. The SAT composite score is the total of SAT critical reading and math subsections.

In 2006, 313 students of 1.37 million test takers scored 690 or below on the SAT composite score for a .02% score nationally. A 690 won’t gain admittance to a New Jersey state college. A score of a 31 on the ASVAB is roughly equivalent to a 7th to 8th grade level, good enough to use for a ticket to a high school diploma in New Jersey.

The April, 2015 Army Recruiter Journal described the Army’s lobbying campaign in New Jersey and gloated that the ASVAB “would be accepted as a substitute competency test for students who fail to pass the PARCC.”

While the military routinely claims the ASVAB is being shut out of schools, the brass has managed to convince school officials in a half dozen states to make the ASVAB an alternative option for end-of-year senior year assessments to provide a path for students who cannot pass the front line tests. A thousand schools across the country require students to take the test.

New Mexico allows a score of a 31 on the ASVAB to provide a path to graduation.

Mississippi wants a senior to score a 36 on the AFQT before he can graduate.

Kentucky calls for a 55 on the AFQT for a student to earn a diploma. A 55 on the AFQT is the same as a composite SAT score of 840, according to the ASVAB Concordance Table. An 840 won’t open many college doors. It represents the bottom 5th of national SAT scores.

Colorado is considering using the ASVAB as a potential graduation requirement.

Military regulations allow the ASVAB-CEP to be administered without results being used for recruitment purposes, although school officials are convinced by representatives from the recruiting command to allow the release of student data to recruiters.

Historically, about 85% of students nationally who take the ASVAB at school have had their results sent to recruiters. Test results also include social security numbers and detailed demographic information. Published reports from New Jersey and the states mentioned herein fail to address the raison d’etre of the ASVAB testing regime, which is to provide leads for recruiters. Furthermore, state departments of education and local school boards continuously suggest that school officials will be giving the ASVAB, when in fact, military officials give the test.

It is an important distinction. The military is adamant about proctoring their enlistment exam, rather than relying on school administrators and teachers. If schools administered the 3-hour ASVAB, results would be regarded as educational records and therefore subject to the Family Educational Rights and Privacy Act or FERPA. This law precludes the release of sensitive student information to third parties without parental consent. ASVAB records are considered to be military documents when the DOD gives the test in the high schools. ASVAB results are the only information leaving American classrooms about children without providing for parental consent.

Pat Elder is the director of the National Coalition to Protect Student Privacy, an organization that works to prohibit the release of student information to military recruiting services from the nation’s high schools. www.studentprivacy.org

David Swanson is an author, activist, journalist, and radio host. He is director of WorldBeyondWar.org and campaign coordinator for RootsAction.org. Swanson’s books include War Is A Lie. He blogs at DavidSwanson.org and WarIsACrime.org. He hosts Talk Nation Radio. He is a 2015 Nobel Peace Prize Nominee.

War Is A Lie: Second Edition, published by Just World Books on April 5, 2016. Please buy it online that day. I’ll come anywhere in the world to speak about it. Invite me!