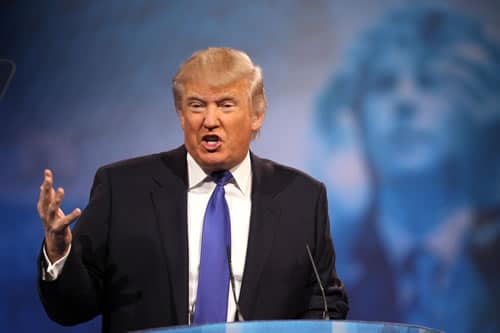 The video above is from Saturday night’s South Carolina Republican debate. If you fast forward to about 28:10, you’ll learn that Donald Trump doesn’t  feel the George W. Bush administration was simply mistaken about Iraq’s alleged weapons of mass destruction. “They lied,” he says.

In an appearance on Face the Nation that aired Sunday morning, Trump was asked to “clarify” his comments from the debate, and he seemed to backtrack, saying Bush “may” have lied, insisting also that he wasn’t “blaming” him for 9/11. But still the words are strong. You can go here and see the full video of the Face the Nation program, and here to see the transcript of the show. Here is a bit from the transcript:

DICKERSON: You mentioned that the World Trade Center came down during George W. Bush’s presidency.

DICKERSON: Are you blaming him for that?

TRUMP: I’m not blaming him, although the CIA and other groups, but the CIA said there was a lot of information that something like that was going to happen. I’m not blaming anybody. It’s a tragedy, horrible tragedy, worst in our country’s history, worse than Pearl Harbor because you’re talking about civilians, not the military. Right?

Thousands of people killed, a horror show. Now, could he have done something about it? His CIA knew about things happening. You could have said — but when Jeb gets up and says, we were safe under his brother, we weren’t safer. First of all, his brother got us into the war in Iraq, which is one of the worst catastrophes ever.

A little bit later in the program the following exchange takes place:

DICKERSON: But you said he lied. That’s — that’s a little more than just he thought that…

TRUMP: Well, he may have. If he knew there weren’t weapons of mass destruction, and if he used that as an excuse to go in and try and make up for some sins for previous years, then it would be a lie. But I don’t think — maybe that’s true, and maybe it isn’t true.

DICKERSON: Impeached, you wouldn’t own that anymore. You once said in 2008 you thought he should be impeached.

TRUMP: Well, let me tell you something. The war in Iraq has been a disaster. It started the chain of events that leads now to the migration, maybe the destruction of Europe.

We would have been so much better off if Bush and the rest of them went to the beach and didn’t do anything. If you had Saddam Hussein, who is a bad guy and all of that, but he made a living off killing terrorists.

This is not an endorsement per se, but Trump seems to me by far the most interesting figure on the American political stage today. I suspect he is fully aware that the official 9/11 story is a complete lie from start to finish, and I’m not the only one saying that. This has also been discussed by Kevin Barrett, who believes Trump has been telling what he refers to as “half truths” about 9/11, such as talking about “dancing Muslims” rather than dancing Israelis.

Barrett may be correct in his thesis. Obviously were Trump to question the official 9/11 story the media response would be an uproar, with outlandish caterwauling about “conspiracy theories,” and were he to venture into the subject of the Israeli role in the operation, we would hear endless accusations of anti-Semitism as well.

But according to some polls, a substantial percentage of Americans now doubt the official 9/11 story–enough to make it an attractive voting block, and Trump’s comment, above, about Iraq being “worse than Pearl Harbor” could almost be looked at as a hypnotic trigger–one almost certain to set off thoughts about the Project for a New American Century and its infamous paper citing the need for a “catastrophic and catalyzing event like a new Pearl Harbor.”

Has Donald Trump, aware perhaps of the possibility of picking up huge numbers of votes, adopted a strategy of deliberately dropping subtle hints about 9/11? Possibly. Though of course I realize I could be reading more into his words than might be justified.

But I do suspect that unease over 9/11 and the war in Iraq may be one of the reasons why the Republican political establishment feels so threatened by Trump. The possibility of a Trump presidency and a re-opened 9/11 investigation has them plenty worried, and with good reason. Such an investigation, were it allowed to run its course, could land a number of them in prison.

At any rate, if you watch the video above, what you will hear Trump say is that the war in Iraq was “a big fat mistake,” and clearly he feels that the blame for this lies with George W. Bush–who by the way, is campaigning for his younger brother today in South Carolina. The former president is scheduled to attend a rally tonight in Charleston along with former first lady Laura Bush.

By official counts, a total of 4,497 American soldiers died in Iraq. Many others came back maimed and injured for life. On the Iraqi side, we have no official death count, but the estimates have varied from a few hundred thousand up into the millions. That’s a lot of torn flesh and shed blood for one man’s mistake.