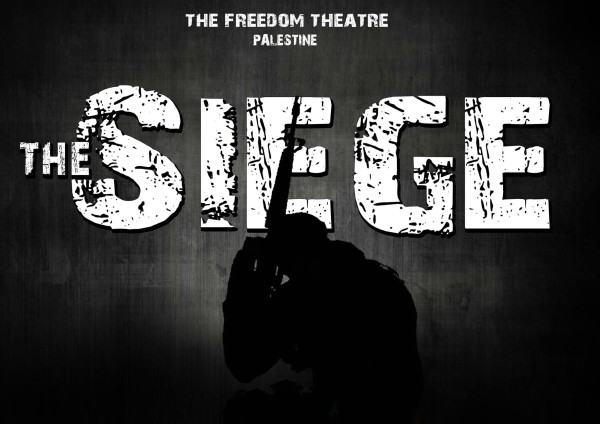 So the ‘The Siege’ has been cancelled in New York. Well, there’s a surprise!

According to Mondoweiss, Friends of The Jenin Freedom Theatre issued a statement saying: “It is with deep regret that we announce that the Public Theater has decided not to proceed with the plans to showcase The Freedom Theatre’s ‘The Siege’ in May, 2016.

“Regardless of the difficulties, we intend to present this play to the US public. We are disappointed, but we are working to find another comparable venue for the play in the fall of 2017.”

‘The Siege’ re-tells one of the most shameful episodes in the continuing Israeli occupation of Palestine, when in 2002 a harsh Israeli army crackdown cornered a group of Palestinian ‘fighters’ and a number of innocent civilians as they sought sanctuary in the Church of the Nativity in Bethlehem. This is probably the oldest Christian church in the world, built by Constantine the Great and dating from AD330.

It seems the Public Theater came under intense pressure to drop the play… the usual intimidation.

When the ‘The Siege’ toured the UK last summer, opening in Manchester, The Lowry’s management warned staff about the ‘sensitive’ nature of the production and possible backlash. “Our decision to programme ‘The Siege’ was made solely on the artistic merits of The Freedom Theatre as a company and the work itself as a performance. Whilst there will be a range of perspectives on ‘The Siege’, it is without doubt a great piece of work telling a fantastic story.”

Predictably, there was mounting pressure from the usual propagandists who claim to speak for the Jewish community, and from those sections of the press that are instantly outraged by anything that looks like casting Israel in a poor light. According to the Daily Mail British taxpayers were funding through the Arts Council a play “sympathising with Palestinian terrorist groups” and presenting an “unashamedly one-sided drama based on accounts from the gunmen and bombers of Hamas and the Al Aqsa Martyrs’ Brigade”.

The newspaper complained that, in the publicity, Hamas and Al Aqsa Brigade terrorists were merely referred to as “fighters” with no acknowledgement of their “cold-blooded murder of civilians”. Jewish leaders, said the report, raised “extreme concern” that the British taxpayer might be funding a play promoting “terrorism as legitimate”.

The Zionist Federation said: “It appears to be a grotesque white-washing of the Second Intifada, a campaign of relentless, indiscriminate murders of Israeli civilians which resulted in the deaths of thousands on both sides. Nor is it the case that these men were ‘freedom fighters’ – these attacks represented a rejection of Israel’s offer of an independent Palestinian state.”

The Times of Israel reported a spokesman for the British Jewish community’s Fair Play Campaign as saying: “Given that ‘The Siege’ writers consulted terrorist killers for research, it seems likely that the play will present the story entirely from the terrorists’ point of view. It is important that audiences understand that the facts are in dispute, and presenting it as a ‘true story’ stands to mislead.”

In 2006 I happened to interview a survivor of the 40-day siege. The ordeal was seared into his memory and I included his recollections in my book ‘Radio Free Palestine’ (2007) which tells the plight of the Palestinians under brutal occupation. It is now on the internet for all to browse. New Yorkers and others in America who can’t wait for the staging of the play in 2017 (if then), can read an account of the siege on pages 62-65 here.

I haven’t seen the play myself for this simple reason. When it came to Glasgow I wrote and asked if I could come along to rehearsal, talk to some of the actors and take a few photos with a view to doing a write-up. My request was ignored – twice. So it seems I’ll never know if my survivor’s story tallies with their dramatisation of the defilement of the holiest site in Christendom.