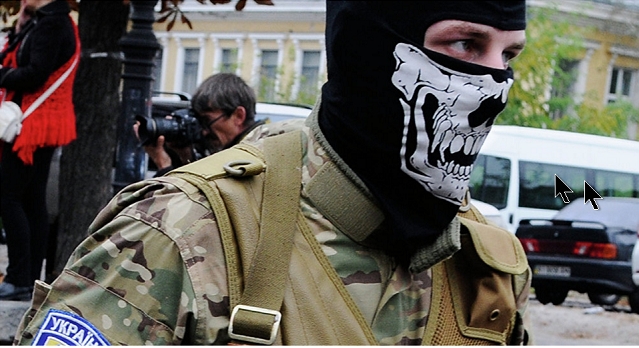 [ Editor’s Note: We are getting down to the nitty gritty in Syria, and possibly Iraq now. The ability of the Syrian coalition to completely roll up the terrorists and jihadis is self-evident, and it will not take them a long time to do it.

So the $64,000 question is will the West push its luck on not having paid a huge political price for its long support and use of terrorism in their Syrian regime change plans, among other places.

Will they double down in fear that, if they lose here, mass media will lose its fear of changing sides and really doing some investigative journalism reporting? I don’t think so.

Will the US coalition fear that if the “play it safe, low level, war-on-the-cheap strategy” gets cranked up to a conventional level, their respective publics will awaken from their slumber and want to start hanging leaders (politically) as a penalty and deterrent for such a huge miscalculation?

We dodged one huge bullet on Syria when Obama cancelled the US bombing campaign, which our sources revealed afterwards would have had considerable losses for the US, due to under-estimating the Russian-Iranian response.

VT supplied intelligence on the Israeli-staged Syrian officer cell phone intercepts that were the “red line” justification for the attack, per none other than John Kerry himself. This was a long used psyops tool during the Cold War.

The public has to weigh in now during this delicate attempt to wind down the level of combat to begin holding those responsible for this ongoing disaster to a public trial of sorts, or they will just shift their aggressive resources to Donbass and the NATO march to pre-staging a new war with Russia.

I suggest that if we wait to the last minute to try to prevent it, that it will be too late. We need to deploy a deterrent to prove that we are not completely powerless. What do you think? Let Gordon and I know in the comments… Jim W. Dean ]

It may not be the United States. There is a war going on, not in Syria or against Eastern Ukraine or the dozen other hot spots around the world. World War III may already be under way, started over Sinai when an airliner was downed, or over Ukraine when another was downed or maybe on the pages of a newspaper.

Governments spend nearly as much on the stuff of conspiracy theories, hoaxes, black propaganda, or even organizing their own opposition, be it phony activist groups or even terror organizations than they spend on spying on their own people, and we are learning how much that has cost with frightening revelations nearly every day.

Before we move into background, we might want to take a minute to look at something. In today’s world of “internet reality” where a viral YouTube video a child could create with computer generated graphics and crisis actors may well now be preferred to the old standby, attacking yourself using agent provocateurs wearing enemy uniforms.

Governments have found that events like 9/11, claimed by engineers, scientists and investigators to be something totally different that claimed by the Bush regime in Washington, are no longer needed to start wars or justify the takeover of American government by organized crime, most probably the real reason for the 9/11 “event.”

What can safely be assumed is that nothing is what it seems, no terror group, no “outrage,” not even the geopolitical conflicts fed the masses. Anyone who refuses to knuckle under to organized crime is targeted for regime change, typically begun by either sanctions, a color revolution or a “just add water” instant terror group like ISIS or Boko Haram, intelligence agency constructs so obvious that little explanation is needed.

You see, one government can never accuse another of a false flag attack, not and risk being accused of spreading “conspiracy theories,” no matter how lame the event such as the 7/7 London attacks debunked by John Anthony Hill in his film, Ripple Effect, or the Charlie Hebdo “event” in Paris, deconstructed by Dr. Kevin Barrett in his widely banned book, “We are Not Charlie.”

The question today, or how we begin, is taking a quick look at the highly acclaimed somewhat fictional political television show in America called Madame Secretary. In this very popular mainstream network fictional drama, a woman becomes Secretary of State when her corrupt predecessor is murdered in what is later learned, on the TV show at least, to be a plot by the CIA to bring about a war with Russia.

A few episodes later something quite amazing happens. Though characters in this type of drama are usually fictional and bashing Russia or Iran has been a Hollywood staple for some time, a new and very unexpected plot line emerges.

In this story, the President’s plane, Air Force One, is “hacked,” taken control of totally and is nearly destroyed, killing the fictional president played by veteran actor Keith Carradine. Russia is immediately blamed and America retaliates by disabling Moscow’s power grid through.

Then something quite amazing happens. As both Russia and America approach a nuclear confrontation, it is learned that the real attack was staged, not by Russia, but by the new government of Ukraine, a government brought to power by a US backed coup. The new president of Ukraine had ordered the terror attack, remind you the “fictional” new president of a not so fictional Ukraine, in order to blame Russia and convince the US to flood Ukraine with weapons, “lethal aid” as opposed to advisors.

Ukraine believed that a false flag ploy might actually bring in American forces, which as we learn, would have been subjected to attack by Ukrainian Secret Service dressed as Russian troops.

This is the question we pose, was this plotline in Madame Secretary, framed with a highly accurate depiction of Washington politics and American policymaking procedure set in a much respected television drama the only way a certain “official channel” in Washington could explain is position on the MH17 downing? The comparison between the real and fictional events are simply too close to ignore. Now we can do some background.

Yesterday, the UK Guardian, the world’s last mainstream “investigative news organization,” reported that 470,000 had been killed in the Syrian conflict, a much higher figure than given before. The source for that figure, which any reasonable analyst can assume will be blamed on Russia or the Assad government in Damascus, was not just obscure, it was a total fabrication.

The Guardian and the hundreds of other news organizations that picked up the story, were quoting the Syrian Center for Policy Research. Within minutes a web page was found, one created from a template in less than an hour.

A Facebook listing was found as well as well as several online voluntary listings typically used by ad hoc groups such as the 1.5 million “non-governmental organizations,” or NGO’s the UN no longer bothers to be involved with anymore.

There is no membership for the SCPR, no governing board, no officers, no offices listed, no specifics of any kind. When I reported this to Veterans Today’s editor, Jim W. Dean, he immediately assumed de facto control of the ethereal organization, not assuming they were a harmless hoax but rather, though done in a humorous vein, they are something else.

Maybe the vacuous “SCPR” is just like the “SHRO,” the source of the long debunked sarin gas stories that nearly brought the world to war, yes the good old “Syrian Human Rights Observatory,” the all-powerful source of information the Guardian, Washington Post and other news organizations still use.

Some months ago, it was found initially by Veterans Today and then by Russia Today that the “SHRO” was actually one man living over a noodle shop in the bleak British town of Coventry.

The hundreds, maybe even thousands of news stories issued by him, as one man is not a “group” or “organization,” were all simply made up. The “confirmed reports” that nearly brought the world to war were not so innocent inventions.

Worse still, in the United States, the profound anti-government movement, a combination of militia extremists, white supremacists, the Israeli-Saudi-Turkish lobby and organized crime, which includes not only Wall Street but their real lifelong partners in narcotics and human trafficking, the Pentagon and running America’s political parties.

Somehow, in the process those opposing Washington’s excesses were to embrace not only closed borders but became torture advocates, push for expanded police powers, lower wages, fewer consumer and environmental protections and elimination of all oversight of election fraud.

Thus, those screaming to jail Obama and Clinton also hail “boots on the ground” in Ukraine, Syria, Afghanistan and seizure of Pakistan’s nuclear arsenal.

Let’s suppose America’s elections are rigged, that Bush was never fairly elected, that congress is bought and paid for with drug money and that America’s courts, media and police are totally corrupt, run by drug cartels or paid off by foreign intelligence services.

Then, were this last statement a safe assumption, and I believe this to be the case, wouldn’t every political, intellectual and social function that failed to take these “facts” into account be nothing more than folly and delusion?