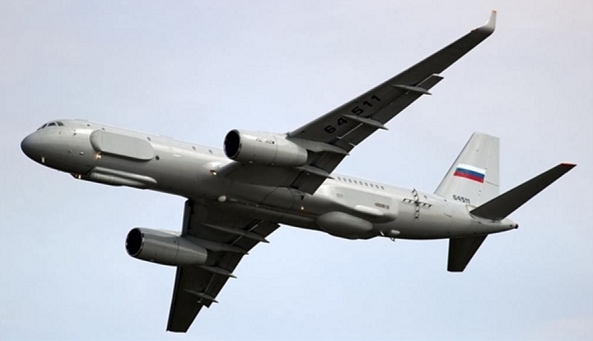 TEHRAN (FNA)- The Tu-214R is a Russian ISR (Intelligence Surveillance Reconnaissance) aircraft. In other words, a quite advanced spyplane.

As we have already explained here in the past, it is a special mission aircraft equipped with all-weather radar systems and electro optical sensors that produce photo-like imagery of a large parts of the ground: these images are then used to identify and map the position of the enemy forces, even if these are camouflaged or hidden.

The aircraft is known to carry sensor packages to perform ELINT (Electronic Intelligence) and SIGINT (Signal Intelligence) missions: the antennae of the Tu-214R can intercept the signals emitted by the enemy systems (radars, aircraft, radios, combat vehicles, mobile phones etc) so as it can build the EOB (Electronic Order of Battle) of the enemy forces: where the enemy forces are operating, what kind of equipment they are using and, by eavesdropping into their radio/phone communications, what they are doing and what will be their next move.

The aircraft is built by KAPO (Kazan Aircraft Production Association) and flown from the company’s airfield in Kazan.

On Feb. 15, the Tu-214R registered RA-64514, serial number 42305014, the second of the two examples of this kind of aircraft built under contract with Russia’s Ministry of Defense, flew from Kazan to Latakia airbase, Syria.

With its ADS-B transponder signals broadcast in the clear and detected by Flightradar24 collecting stations, the aircraft could be tracked as it followed the eastern corridor from Russia, to the Caspian Sea and then to Syria via the Iranian and Iraqi airspaces. It’s not clear whether the aircraft has already been delivered to the Russian Air Force, even though it is quite weird that a developmental aircraft is deployed abroad (unless the reason is testing it at war in a real scenario…).

While it was still under development, the same Tu-214R aircraft flew what appeared to be an operative mission on Jun. 18, 2015, when it flew from Kazan to Crimea and back, closely following the border between Russia and Ukraine, most probably testing some of its sensors against real targets.

Previously, the aircraft was spotted flying near Crimea. Interestingly, while over the Caspian Sea, approaching the Iranian airspace, the Tu-214R performed a couple of 360° turns at 33.000 feet (weird, while enroute): maybe it was working on the diplomatic clearence to enter Iran?