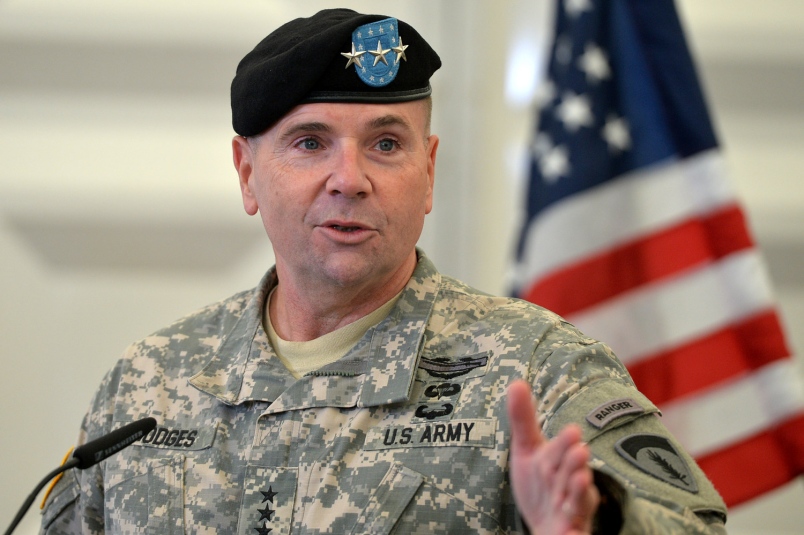 … from TASS, in Vienna

[ Editor’s Note: This is a major statement here. Yes, he is dancing around Russia’s many requests for the US to work more closely in fighting the Islamic State, and Hodges knows the US has refused to do so.

The proof of that is the US has not been sharing targeting information it has on ISIS, whereas some of the real opposition groups have, and Moscow has publicized this.

Lesser known, however, is an event that took place after Jordan lost its one pilot who was captured and then burned alive in a major ISIS propaganda video. It worked.

Jordan stopped flying missions, so US taxpayer support for its air force was a waste. But then, the UAE and others said that if the US did not have an established air rescue structure inside Syria, they would not fly combat missions.

VT will now reveal that we were an intermediary in getting agreement (the quiet kind) with Syria that they would coordinate assisting such rescue teams from Syrian bases. During our historic trip to the Syrian Counter terrorism conference in December of 2014, we brought the highest ranking US intelligence officer with us to ever visit Syria.

During a late night meeting with a top Syrian security official, and with Nana translating, agreement from Damascus was obtained to host air rescue teams quietly. This was rejected when delivered to Washington — quite a disappointment. But as Gordon would say, “Welcome to how the world really works.”… and I would say, “You just can’t make this stuff up.”

We had thought this would be the perfect starting point for a trust-building process, but Washington and/or the Pentagon were not ready. Why? All we could think of is that “they” felt they were winning and did not want to do anything to legitimize Assad, even with a quiet joint pilot rescue operation.

Were we pissed? Of course we were. You might remember that three of the four of us were poisoned while there (E-coli), someone obviously unhappy about what we were trying to do, and trying to keep us from moving around.

Hodges saying this in front of a major conference, and then nothing happening to back it up will just add to his playing the fool on Ukraine about the Russian invasion that he claimed was ready to sweep across Ukraine; an invasion that not even the monitors on the Russian border ever saw.

He was picked to make this statement, either to refurbish him, or because his reputation is expendable. But we all know he would not have said this without clearance from the Pentagon and White House.

Also note the report today that Turkey says it will not be putting ground troops into Syria, and then the curve ball of Angela Merkel calling for a no fly zone in Syria, when she is about to get trounced in the upcoming elections and possibly be unemployed… Jim W. Dean ]

“I am sure that we would all welcome Russian help against Daesh, or ISIL [Islamic State of Iraq and the Levant — former name of IS],” Hodges said adding that “there’s plenty of incentive to work together. Russia needs the West in this fighting against Islamic extremism even more than the West needs Russia,” Hodges noted.

According to the commander, the United States considers the discussion about the new Cold War not constructive.

“That is not useful and not constructive, and it doesn’t help people to think more clearly about the actual environment,” Hodges said at the OSCE high-level seminar on military doctrines and defense policies.

Hodges noted that he does not agree with Russian Prime Minister Dmitry Medvedev’s statement at the Munich Security Conference that Russia and West are sliding back to a new Cold War.

“The most important thing we need is transparency, to let everybody see what the other side is doing,” he went on.

“NATO is providing enough transparency and openness,” Hodges said adding that “the equipment that is being put inside Estonian, Lithuanian, Polish, German bases is well-known to everybody, so there’s no mystery about how much it is.”

“Of course, it’s a very small amount — 235 tanks, infantry fighting vehicles which will not fill up the parking lot of the Hofburg [in front of OSCE’s office in Vienna],” he noted.

“So they are there to provide assurance to those allies that the United States is committed to their defense,” Hodges said. “So, that’s completely transparent, and everybody in the world can see that. We want it to be seen, so that people are confident,” he concluded.