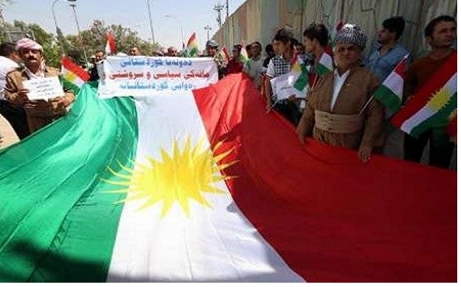 [ Editor’s note:  The article below is published in the Barzani Kurd Rudlaw news organization site.  The purpose is, as is the case in many of their articles, blatant misdirection.  Barzani, who exercises full dictatorial powers, has chosen to stand with Erdogan against the Kurdish people, who mostly reside in Turkey, Syria, Iran and many in Iraq.
Erdogan is killing off the Turkish Kurds, shelling the Syrian Kurds, which Rudlaw and Barzani are silent on, and is trying to blame Israel and Iran somehow, who really aren’t involved.  Iran may well be upset with Barzani who invited Turkish troops illegally into Syria while investigations reveal that Erdogan and Barzani are fully involved as allies of ISIS… Gordon Duff ]
___________
– First published  …  February 17, 2016 –
ERBIL, Kurdistan Region – Israel and the Islamic State (ISIS) are the only groups that will benefit from possible independence of the Kurdistan Region says a top Iranian West Asia analyst.

In an interview with the Iranian Azad News Agency (ANA) published on Wednesday Alireza Ayati said a Kurdish state will shake the Middle East and that Iran’s future relations with the Kurds depends on maintaining the status quo.

“A united Iraq is needed for regional and international security. Separation of Iraq only benefits Daesh and Israel,” the Tehran-based analyst said, using an Arabic acronym for ISIS.

He also accused Ankara of false political calculation and said, “If Turkey thinks they can establish strategic relations depending on their common Sunni roots with the Kurds, and if they believe that, under the shadow of an independent Kurdish state, Turkey can solve its own Kurdish problems, they are wrong.”

“Turkey has big Kurdish problems of its own and with the separation of Iraq, they will face a security dilemma,” he warned.

Ayati believes it is difficult to say if Kurds would be able to obtain their historic goal of an independent nation state or not due to the complex political, economic and social structure of Iraq, but the future of Kurds after independence remains unknown, too.

He said: “It is not clear that Kurds can exist after separation. They might face serious ethnic and religious tensions and sectarian war.”

The issue of Kurdish independence is now back in the spotlight as earlier this month Kurdish President Masoud Barzani called for preparation for a referendum on the issue.

“Some countries have shown support to Kurdish independence in secret but no country has dared to practically support them,” Ayati said.