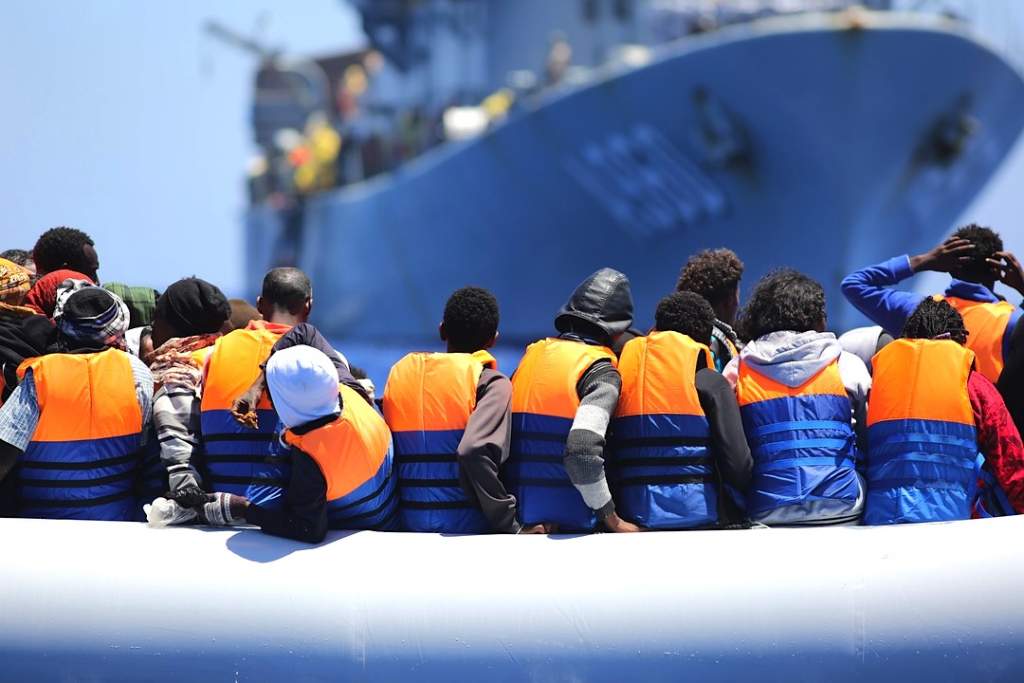 [ Editor’s Note:  This story is nothing new. Operation Sophia has been going on for some time now and its intentions to take on the smugglers in their base countries was no secret, either.  So whoever is claiming to be Wikileaks when a variety of intelligence agencies could easily have released the report below, has failed to impress VT.

RT spun this as the NATO octopus wanting to take over northern Africa when in other stories they acknowledge that the illegal immigrant problem and growing refuge one is destabilizing the EU. Using the D-word makes it a security issue so it should come as no surprise to find naval security forces coming up with strategies to control the problem.

The report itself mentions the obvious political variables involved, that without the smuggling transit country’s support there will not be much that can be done. Libya as a failed state, not all of that its own fault but to a large degree it is, is ground zero for the African smuggling. One notices that not too many of those boats are leaving Egypt or Israel filled with illegal immigrants.

With an economy going to hell in a hand basket Libya is becoming not only a terrorist paradise but a smuggler’s one, too, because long term operations cannot be carried on without paying off the local police and political structure. And if you think you are looking at poor starving immigrants, look again.

You pay based on where you are from, more if from a more developed country. And you pay more for a less over crowded boat. One Syrian family paid $100,000 for their own Zodiac.

As for getting into the business anyone out of work in Libya can sell their apartment to buy a boat and have half the money back after the first trip.

Human smuggling is a threat to the stability of struggling nations with many of their own citizens having unfufilled needs and enduring one wave of austerity after another.

For someone to claim that boatloads of illegal immigrants have a right to gate crash the red ink budgets of struggling countries to get a piece of the pie because they want to does not fly with me. The Guardian gave a case of one “nurse” from Eritrea paying $7000 just to get to the Libya coast. In Eritrea seven grand is a fortune, or maybe she was just a very good nurse.

Governments have a duty to take care of their own people. For the overseas folks they have something called “development programs” where jobs can be created with a lot more bang for the buck. The TV series Madame Secretary has put the micro loan program back in the spotlight, but such programs are not popular with the scammers and bribe hustlers... Jim W. Dean ]

WikiLeaks has released a classified report detailing the EU’s military operations against refugee flows in Europe. It also outlines a plan to develop a “reliable” government in Libya which will, in turn, allow EU operations to expand in the area.

The leaked report, dated January 29, 2016, is written by the operation’s commander, Rear Admiral Enrico Credendino of the Italian Navy, for the European Union Military Committee and the Political and Security Committee of the EU.

The document gives refugee flow statistics and details of performed and planned operation phases of the joint EU forces operating in the Mediterranean.

The report also places pressure on the responsible EU bodies to help speed up the process of forming a “reliable” government in Libya, which is expected to invite EU forces to operate within its territorial waters, and later give permission to extend EU military operations onshore.

“Through the capability and capacity building of the Libyan Navy and Coastguard we will be able to give the Libyan authorities something in exchange for their cooperation in tackling the irregular migration issue. This collaboration could represent one of the elements of the EU comprehensive approach to help secure their invitation to operate inside their territory during Phase 2 activities,” the document states.

Admiral Credendino writes that the task force is ready to proceed to phase 2B despite political and legal challenges:


“…We are ready to move to phase 2B (Territorial Waters) where we can make a more significant impact on the smuggler and traffickers business model.”

“However, in order to move into the following phases we need to have a government of national accord with which to engage. A suitable legal finish is absolutely fundamental to the transition to phase 2B (Territorial Waters) as without this, we cannot be effective.”

“Central to this and to the whole transition to phase 2B, is an agreement with the Libyan authorities. Ultimately they have the casting vote on the legal finish which will in turn drive the transition to phase 2B and the appetite for Member States to provide assets. As a European Union, we must therefore apply diplomatic pressure appropriately to deliver the correct outcome,” the document states.

The leak comes less than five months after it was reported that Operation Sophia would consist of 22 member states and 1,300 personnel which would board and seize suspect vessels in the Mediterranean.

However, the document notes that when the operation progresses into phases 2B and 3, “the smugglers will again most likely adapt quickly to the changing situation. The primary concern for smugglers will likely remain to avoid being apprehended so they can continue their illegal activities.”

The operation’s objective is primarily to disrupt smuggling routes by human traffickers, rather than to stop migration flows, according to the European Union Institute for Security Studies, which wrote in a document that the operation began on July 27, 2015.

The Institute noted, however, that there is a “real uncertainty on whether the operation will ever be able – for either legal or political reasons – to get to the core of its mandate, i.e. neutralising the smuggling networks through deterrence or open coercion, both off the Libyan coast and onshore.”

It went on to note that regardless of the operation’s support for EU member states, only “a very few” are likely to “have the skills and experience for such missions, let alone the will.” It also stressed that the operation cannot be a “solution” to the refugee crisis, and that “no one in Brussels is contending that it could.”

The document’s release comes as Europe continues to face the worst refugee crisis since World War II, with the numbers of new arrivals expected to grow this year.