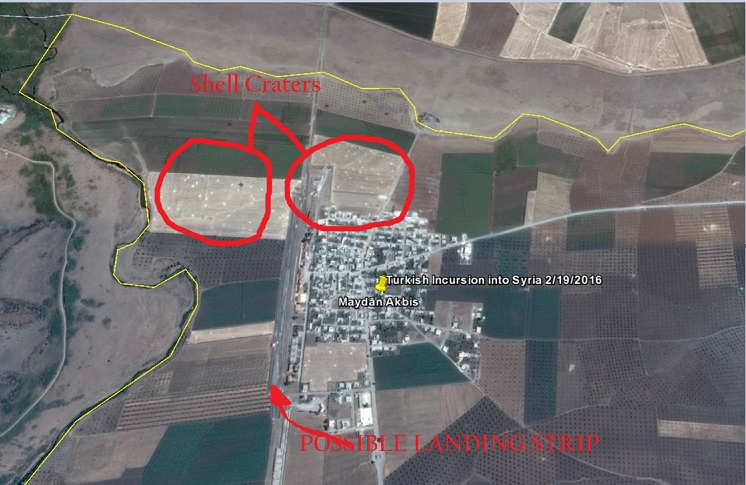 PHOTOS: Turkey Army Troops Enter Syria’s Aleppo Province
Turkish military vehicles have been photographed in the northwestern Syrian province of Aleppo while Turkish troops have been spotted digging a trench there.

The Kurdish Hawar News Agency (ANHA) posted the pictures on its website on Thursday, saying dozens of the vehicles had encroached 200 meters (0.1 miles) into the province.

The troops were then spotted digging a trench between two villages, known as Sorka and Meidan Ekbis.

The news agency added that a concrete wall was also under construction on the nearby Syrian border.

The area forms part of Rojava, a region within Aleppo which has proclaimed autonomy from the Syrian government but has not been recognized by Damascus as autonomous.

Over the past few days, Turkey has been shelling the positions of fighters of the Kurdish People’s Protection Units (YPG) and its affiliate Democratic Union Party (PYD) in the northern parts of Syria.

Ankara regards the YPG and PYD as allies of the outlawed Kurdistan Workers’ Party (PKK), which has been fighting for an autonomous Kurdish region inside Turkey since the 1980s.

The YPG, which controls nearly Syria’s entire northern border with Turkey, has been fighting against the Takfiri terrorist group of Daesh.

In order to justify its military presence in Syria, the country has been pushing to join the US-led coalition, which has been pounding Syria since 2014 in line with its proclaimed goal of routing Daesh Takfiri terrorist group there.

Ankara has also been engaged in a large-scale campaign against the PKK in its own southern border region in the past few months. According to the Turkish Human Rights Foundation, the operations have claimed around 200 civilians, including 39 children, since last August.

Since 2011, when Syria started to find itself engulfed in full-fledged foreign-backed militancy, Turkish authorities have been providing battleground and other supplies to anti-Damascus militants.

On Wednesday, Turkey demanded the creation of a “secure strip” inside Syrian territory that covers the militants’ crucial supply route.

“What we want is to create a secure strip, including (the town of) A’zaz, 10 kilometers (six miles) deep inside Syria and this zone should be free from clashes,” Turkish Deputy Prime Minister Yalcin Akdogan said.

Syrian troops and Lebanon’s Hezbollah fighters have retaken the town, located near Aleppo’s provincial capital of the same name.

The militants depended on the corridor to ship arms from Turkey into Aleppo, where the Syrian army and Russian aerial backup have been increasingly eating away at their turf. Having lost the route, they would have to look elsewhere for supplies, thus failing to rapidly rearm, Press TV reported.