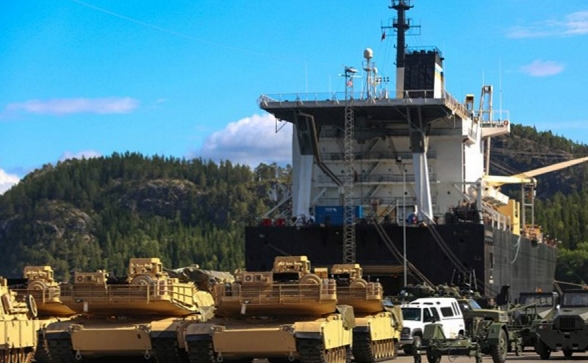 The US military is deploying weapons and equipment to Cold War era caves in Norway, as part of Washington’s push to station equipment near the NATO-Russia frontier.

Any gear that is forward-deployed both reduces cost and speeds up our ability to support operations in crisis, so we’re able to fall in on gear that is ready-to-go and respond to whatever that crisis may be,” Col. William Bentley, operations officer for the 2nd Marine Expeditionary Brigade, said in a statement, CNN reported Thursday.

The “confidential” climate-controlled caves are located throughout central Norway and were first used as an American arms depot in 1981, in an effort to bolster NATO’s defenses against the Soviet Union during the Cold War, the statement added.

When that era ended, however, the US questioned the logic behind the costly maintenance of the advanced cave complex, according to Magnus Nordenman, director of the Transatlantic Security Initiative at the Atlantic Council.

This prompted the Norwegian government to shell out the costs in a bid to save the caves in the 1990s, Nordenman added.

Operated by about 100 Norwegian and US personnel, the secured cave system is a modern facility that contains enough equipment to support 15,000 Marines, according to Nordenman, who has discussed the caves with the Norwegian minister of defense.

Some 6,500 pieces of the equipment in the caves will be used in an upcoming drill dubbed the Cold Response 16, which is scheduled later this month. Twelve NATO allies and partners and more than 16,000 troops will partake in the exercise.

The weapons and other equipment stored in the caves have also been used to support operations in Iraq.

Heather Conley, director of the Center for Strategic and International Studies’ Europe Program, told CNN that geopolitical changes in the region, including “a very new security context with Russia,” has once again made the caves a strategic asset.

Conley said the new military exercises are critical for NATO to test its equipment and personnel in cold weather environments in the wake of Russia Northern Fleet’s unannounced military drills in March involving 38,000 troops.

The announcement comes days after the Pentagon announced a $3.4 billion budget for the European Reassurance Initiative in an effort to deter what the US calls Russian aggression against NATO allies.

Under the initiative equipment will be propositioned in the Baltic States, Poland and Central Europe, Press TV reported.