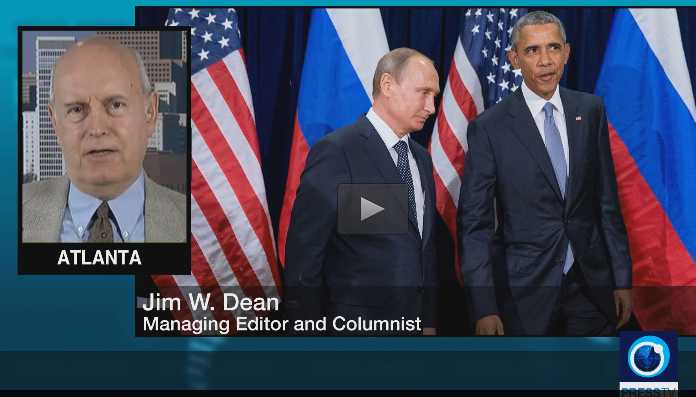 This is just a screen grab above. Interview link is below

[ Update Note:  This interview was on the 14th but it’s nice to go back to measure how things turned out since then. The good news is the UN aid trucks have been flowing, and this includes communities outside Damascus that have been held by jihadis for several years with their human shield hostages.

Western media has only covered these aid convoys lightly. Missing is getting good interview footage of what they have endured at the hands of the Western supported opposition and terror groups, and how little influence the West had over their minions to be treated better.

Actually they were abused as part of the process to undermine Assad as in, “If you want to save your extended family, help us get rid of Assad and you will have a chance to save them.” The Turks have turned out to be the spoilers as expected. With their shelling, moving reinforcements into the jihadi areas and now even Turkish troops to create a buffer zone, that effectively kills a general ceasefire. But that is not all bad.

As I state below there will be successful local ones. The civilian defense forces will come behind the army to take over local security so the now very experienced Syrian Army can keep moving forward to recapture more of its territory and hopefully be able to block resupply of their terrorist units still remaining in action.

As I type the UNSC has been in session since 3pm EST the Russians wanting a meeting on Turkish troops crossing the Syrian border now to begin building their buffer zone. The UNSC’s last admonition to stop shelling Syria has been ignored.

On the contrary, Turkey has called on the US to stop supporting the “terrorist YPG Kurds”. Despite no evidence of Turkey being attacked by the YPG, after all they do have their hands full fighting in Syria, Erdogan has bet the farm he can invade Syria as part of his own anti-terrorism action against YPG, and neither the US or NATO will do anything about it.

We believe he has staged some terror attacks against his own military as cover, the last one conveniently blamed on the YPG. This is a dangerous man, one that should be removed by a coup.for the good of the Turkish people and everyone in the region now... JD ]

You can listen to the 4 minute audio interview here.

The recently announced Syria truce deal was achieved in the light of Russia’s “successful” air campaign in the country which brought the West to the negotiation table, says an American political analyst.

After days of negotiation, diplomats from a group of countries in Munich, including the US, Russia, Turkey, Saudi Arabia and Iran, agreed on Friday to seek a temporary “cessation of hostilities” in Syria within a week.

“We are now sitting on pins and needles after the Munich meeting,” Jim W. Dean told Press TV on Sunday. “We have not really a ceasefire but something called a cessation of hostilities which is kind of preliminary to a ceasefire.”

According to the Veterans Today columnist, this is good news for civilians who have been under terrorists’ siege in several Syrian towns.

However, Dean noted that the main reason behind the deal is Russia’s military campaign in Syria, conducted upon a request by Damascus since September last year.

“The Russian campaign has been successful beyond anyone’s imagination. It has been professionally conducted,” despite all the attempts by the West to make it look harmful to civilians, he said.

Moscow’s “successful” anti-terror campaign has strengthened Syrian President Bashar al-Assad’s control on the war-torn country, Dean further explained, allowing him to stay in power as the country’s legal president, something Washington is firmly opposed to.

Dean said that countries like Saudi Arabia and Turkey who also have a say in the matter are against such a deal and will attempt to derail it, which is why many people are not optimistic about the effectiveness of the proposed truce.

Dean cited Turkey’s continued shelling of Kurdish positions inside Syria, along with Saudi Arabia’s readiness to deploy troops to Syria as indications that the truce is not likely to hold up.

Such actions would send the situation into a dangerous stage “that could explode into a much wider war beyond anyone’s imagination.”

The foreign-sponsored conflict in Syria, which flared in March 2011, has claimed the lives of some 470,000 people and left 1.9 million injured, according to the Syrian Center for Policy Research.