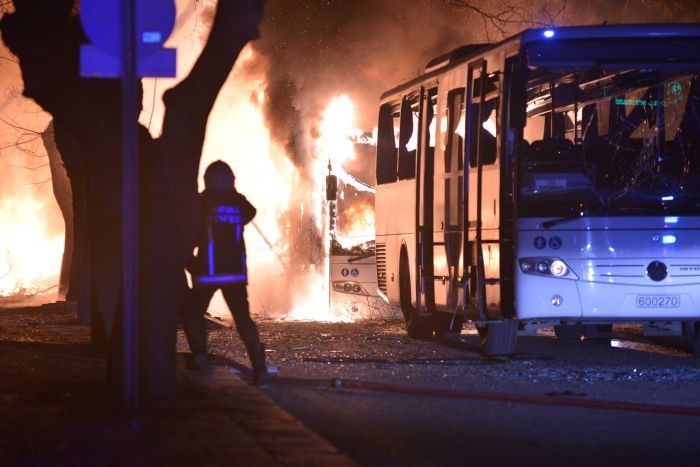 [ Editor’s note: “The lady doth protest too much, methinks,” is one of the more famous Shakespeare lines, from Hamlet, Act III, Scene 2. It has been used colloquially when a guilty party tries too hard to transfer its own guilt onto another.

If Erdogan has any modern image consultants within his inner circle, they have to be yes men — political hacks. At the other end of the spectrum from Putin’s poise, he is overkill on steroids, which historically has been an indicator of weakness.

At VT, we have fun with our betting pool with almost 100% accuracy, predicting what cheap scam he is going to pose to grab the headlines, such as the Kurds have shelled Turkey so he is responding to save Turkish honor, and that he will stage more bombing attacks to frame his political targets. After quickly blaming YPG for the two last Turkish military attacks, a PKK affiliate has taken credit for them as being a response for Erdogan’s civilian atrocities in his latest Kurdish ethnic cleansing campaign.

I had predicted Erdo would begin bombing the military to whip up war fever among them as insurance for there being less chance of a military coup, as they would not, under current conditions, want to get into a cross border war with Syria and the Russians, when NATO is already signaling it is not about to be manipulated by Erdogan.

Frankly a coup is badly needed in Turkey, and the world would be most appreciative. But Erdo has anticipated this and has been purging not only the military but the police, judiciary and the media — any place where opposition can rally around a flag he does not control.

Obama is caught walking a tightrope, as Erdogan is holding a lot of blackmail cards on America’s support for terror formations, despite the endless mantra of insisting they are all “moderate opposition” groups. That has now become such a ludicrous assertion that it appears he is just trying to ride out the last few months of his administration and pass the problem on.

That said, we cannot say that Erdogan’s gang is the only example of a criminal gang having taken over a Western government, lurking in the background where it has access to the intelligence wings and the military to pursue its aims. The Bush-Cheney gangsters brought the US further along that road than anybody, with not even a single arrest in opposition for their Crimes against American Humanity… Jim W. Dean ]

The fireball from this week’s blast in Ankara had barely begun to fade before the world begun bracing itself for the predictable accusation that Syria’s Kurdish YPG (People’s Protection Units) were behind the blast.

This is because Turkey has developed a transparently cynical strategy of staging blasts throughout its territory and behind to stoke fears, justify condemnation and retaliation and demonize not only it own enemies, but those of its partners in NATO and particularly, those of the United States.

Syria’s YPG was the obvious target of this blast and the barrage of accusations and threats that quickly followed because it is the YPG together with Syrian and Russian forces that now threaten to finally foil the US-NATO-GCC proxy by closing the Afrin-Jarabulus corridor, and specifically, the pivotal city of Azaz, located in Syria right along the Syrian-Turkish border.

For years Azaz has served as a nexus for foreign-backed militant operations not only in northern Syria, but as a logistical hub supplying terrorist operations all throughout the country. Its seizure by either Syria’s Kurdish YPG or the SAA (Syrian Arab Army) would effectively hobble US-NATO-GCC’s proxy war, at least in the north.

Tripping in a Tangled Web of Treachery

Over the past week, Turkey has been shelling Syrian territory, concentrating its firepower on a southwest road leading to the city of Azaz. Kurdish YPG forces have been advancing up the road, lined on both sides by small farmers and accompanying civilian houses in a bid to liberate the city long-held by both IS (Islamic State) and Al Qaeda affiliates including Jabhat al Nusra (a US State Department listed foreign terrorist organization).

Despite the bombardment, the fate of US-NATO-GCC backed terrorists held up there is inevitably doomed. Just after the blast and amid threats by Ankara to retaliate not only against the YPG, but he Syrian government itself, some 500 terrorists described as “Islamists” by the London Guardian crossed over the Turkish border and headed to Azaz as reinforcements.

Keen readers will notice the term “Islamist” is often used as a somewhat more ambiguous label to avoid accurately describing the fighters as either Al Qaeda affiliates or IS itself. Together with continued artillery fire from Turkey, what the world now sees is NATO openly fighting a combined arms battle against Syria alongside Al Qaeda shock troops.

Ankara’s threats against the YPG and the Syrian government is particularly ironic. The Washington Post in its report “Turkey accuses a Syrian Kurd of bombing Ankara and vows to retaliate,” claims:

[Turkish Prime Minister] Davutoglu said he also held embattled Syrian President Bashar al-Assad responsible because Assad and his government have acknowledged on a number of occasions that they provide arms to the YPG.

However, this logic quickly breaks down when one considers the United States has also acknowledged on a number of occasions that it provided not only arms to the YPG, but also aircover.

Perhaps the United States and their junior partners in Ankara believe the public has forgotten such headlines as that in the Wall Street Journal, “U.S. Airdrops Weapons and Supplies to Besieged Syrian Kurds in Kobani,” which reported:

US-led coalition jets struck Islamic State positions in north-east Syria for the second day in a row on Saturday, in an area where the militants are battling Kurdish forces, a Kurdish official and a group monitoring the war said.

Despite the “logic” underpinning Ankara’s accusations and threats against both the YPG and Damascus, none should expect similar threats or retaliations to materialize against the United States, who has maintained a military presence for decades inside Turkey, itself a NATO member since the conclusion of the Second World War.

Instead, what we see is the total breakdown in the US-NATO-GCC narrative used to carry this conflict onward since 2011. The battle along Syria’s border is clearly not about any threat the YPG or the Syrian government pose to Turkey or any other NATO or GGC member.

Instead, the battle along the border is clearly about the imminent strangulation of US-NATO-GCC supply lines that have fed what is now clearly appearing to be a foreign invasion, not a “civil war.”

When Syria’s borders are closed, and the “civil war” evaporates, it will be proof-positive of the ploy these foreign powers have attempted to play against Syria, and will ultimately derail similar conspiracies being organized and arrayed against other nations across the entire planet.

For the people of Turkey, with yet another blast tearing through their capital and spilling the blood of their brothers and sisters, once again coincidentally times to break a geopolitical impasse their current government faces amid its schemes abroad, they are surely taking stock of the increasing price they have so far paid for this conflict, and extrapolating the debt they will incur should it be allowed to continue on even a day further.