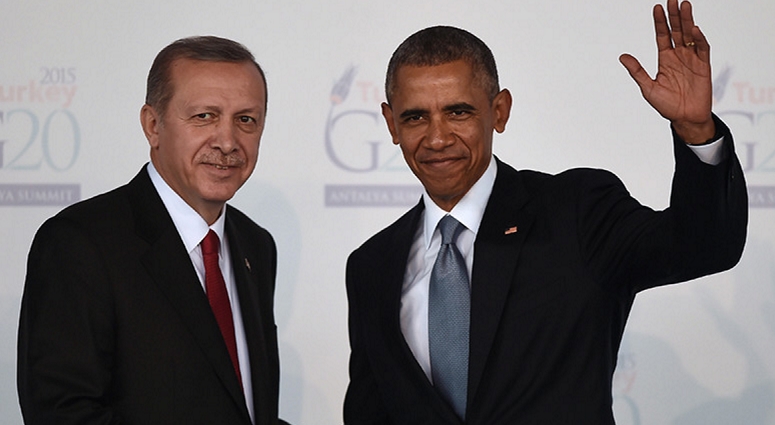 Turkish President Recep Tayyip Erdogan (L) shakes hands with US President Barak Obama © Ozan Kose / AFP
1.1K3
–
The US president has sided with Turkey and warned the Syrian Kurdish militia not to seize more territory in Syria to avoid upsetting Ankara or the so-called “moderate” opposition. Obama voiced support for Erdogan against the Kurdistan Workers’ Party.
–

In a long phone conversation that lasted an hour and twenty minutes, Obama told his Turkish counterpart Recep Tayyip Erdogan that the US has an“unwavering commitment” to Turkey’s national security.

Obama said he is “concerned” about the Syrian Army’s and Kurdish fighters’ gains in northern Syria as he “urgently called for a halt to actions that heighten tensions with Turkey and with moderate opposition forces in northern Syria,” according to a statement from the White House.

The US president stressed that the ongoing advance of Syrian armed forces and Kurdish militia, with support from the Russian Air Force, could “undermine our collective efforts in northern Syria to degrade and defeat ISIL.”

While advising Erdogan to show “reciprocal restraint” and avoid shelling northern Syria where Ankara is engaging Kurds, Obama stressed that “YPG forces should not seek to exploit circumstances in this area to seize additional territory.”

At the same time both leaders called on Moscow and Damascus to halt airstrikes against what they call “moderate opposition forces.” Russia has on numerous occasions denied striking civilian targets, and has repeatedly offered its air support to opposition fighters.

Russia’s Foreign and Defense Ministries have also repeatedly asked Washington to provide a list of the groups it considers “moderate”enough. The US also ignored calls to share intelligence on Islamic State (IS, formerly ISIS/ISIL) positions or to join a wider coalition of an anti-terrorist force.

While the Kurdish groups, supported by the United States in the fight against IS in northern Syria, are considered one of the most effective ground forces in fighting jihadists in the area, Ankara regards them as terrorists.

Vowing retaliation in both Syria and Iraq for the Ankara bombing earlier this week, Turkish Prime Minister Ahmet Davutoglu promised to continue to bomb the Kurds, including PKK bases in northern Iraq and YPG positions in northern Syria. Ankara also made it clear that it expects cooperation from its NATO allies to assist Ankara in this fight. Following the bombing in Ankara, Erdogan promised to hunt the perpetrators“everywhere” possible.

Prior to speaking with Obama, Erdogan announced that American weapons were being used against civilians by the YPG. The State Department has refuted the claims, with spokesman Mark Toner saying: “We have also seen no evidence to substantiate the claim that the YPG is somehow smuggling US weapons to the PKK.”

Earlier in the day, Washington rejected a Russian draft resolution at the UN Security Council condemning any plans for foreign military intervention in Syria. Ambassador Samantha Power even accused Moscow of trying to “distract the world”with its resolution.

US Secretary of State John Kerry said the discussions with Moscow on the ceasefire in Syria are “near-constant” and have been “serious and so far constructive.”

“Everyone recognizes the complexity of this endeavor, and there is certainly a lot more work to do. These discussions have been serious and so far constructive, with a few tough issues still to resolve,” Kerry said in London as quoted by Reuters.

He has been in contact with the US Syria team, which is in Geneva and said the negotiations have been ongoing for the past 36 hours.

US, France say Russia’s draft resolution on Syrian sovereignty has ‘no future’

Kerry briefly stopped in London en route to Jordan where he is to discuss Syria with King Abdullah over the weekend.

The proximity talks launched in Geneva in February have been delayed with an indefinite date of restart, according to UN special envoy to Syria Staffan de Mistura. On Friday, de Mistura’s office said it would provide a new date for the meeting in Geneva “as soon as possible.”

De Mistura told Swedish newspaper Svenska Dagbladet that the peace talks won’t resume in Geneva on February 25 as he had hoped. He said he can’t “realistically” get the parties in the Syrian conflict back to negotiations by that time. However, he added that he hopes the parties will gather “soon.”

“We need real talks about peace, not just talks about talks. Now the Americans and Russians must sit down and agree on a concrete plan on the cessation of hostilities,” he said in the interview on Thursday.

At the beginning of February, the United Nations temporarily suspended peace talks aimed at resolving Syria’s five-year civil war. The UN said the process was to be resumed on February 25 and called on the sides involved to do more to achieve progress.

An ambitious plan to end hostilities in Syria with verifiable results within a week, revived the Geneva-3 peace talks, when Kerry and Lavrov unveiled the truce plan in Munich last Friday. While the humanitarian aid has begun flowing into besieged towns in Syria this week, the warring sides have yet to end hostilities.