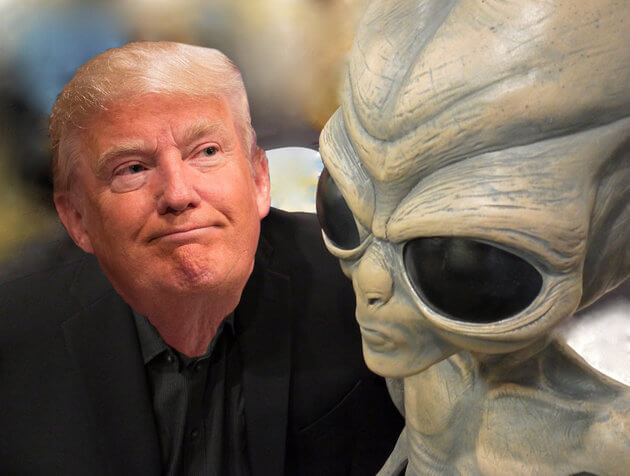 First he scoffed at Obama’s phony birth certificate. Then he revealed that Hillary armed ISIS. A few days ago he threatened to expose “who really knocked down the Twin Towers.”

How far will Donald Trump boldly go where no mainstream candidate has gone before?

Yesterday we learned the answer: To the edges of the galaxy and beyond.

Trump also re-stated his intention to ban all extraterrestrials from entering the United States, whether by air, land, sea, or tunnel connected to a DUMB (Deep Underground Military Base) “until we can figure out what’s going on.”

Trump has consistently argued that current rates of illegal alien immigration, together with an ongoing wave of UFO abductions, pose a threat to the political, cultural, and even genetic integrity of the United States of America. Citing demographic projections

that Earth humans could be a minority in the United States by 2050, Trump says he would deport all of the tens of millions of illegal aliens currently residing in, above, and underneath the United States, and build walls around the country to keep new ones out.

When half-human half-alien hybrid reporter Xghwid KAAW*8 questioned the concept of a wall in the sky, asking what would hold it up, Trump ejected KAAW*8 from his press conference, saying: “Go back to the Andromeda galaxy where you came from, you three-tentacled slime-emitting loser.” Later a Trump spokeshuman who denies carrying any trace of hybrid blood explained that secret US military programs have reverse-engineered flying saucers with anti-gravity propulsion systems, and that the same anti-gravity systems could easily be used to hold up a huge concrete wall in the sky thousands of times larger than the Great Wall of China or even the larger wall Trump proposes to build on the US-Mexican border.

From the Vatican, Pope Francis immediately criticized Trump’s statement, saying: “Donald Trump is not a good Christian. A huge concrete wall in the sky would pose an impediment to the coming and going of God’s angels, and prevent our prayers from rising unimpeded to the celestial throne. And it would be an even more colossal eyesore than those hideous concrete monoliths Trump has been defacing New York City, Chicago and other major metropolitan areas with all these years.”

Trump quickly responded: “Did he (Pope Francis) really say that about Trump Tower? For a religious person to question the faith, or the gargantuan concrete phallic symbol, of another man, is disgraceful.”

Trump added: “At a time when alien abductions are so rampant, we need a strong leader who will defend Christendom against the Grays and their Reptilian overlords. If and when the Vatican is attacked by flying saucers and the pope is abducted, which as everyone knows is the Grays and Reptilians’ ultimate trophy, I can promise you that the pope would have only wished and prayed that Donald Trump would have been president because this would not have happened.”

“Hillary Clinton,” the humanoid husk currently inhabited by the shape-shifting Reptilian emperor, could not be reached for comment.