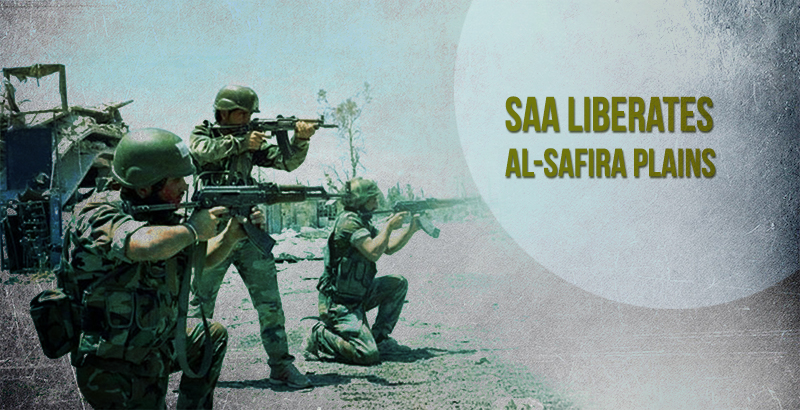 On Feb.21, the SAA continued the advance and imposed full control over the villages of Jubb al-Safa, Kabarah, Rayyan, Al-Halabiyah, Dakwanah, Tall Istabl, Ain Sabil and Tall Riman, smashing the terrorists encircled there. Al-Safira Plains are under the full control of the SAA.

In a separate development, ISIS cut the government’s supply route, the Ithriyah-Khanasser road, leading to the Aleppo province. According to reports, ISIS was able to do it by capturing Rasm Al-Nafal from the National Defense Forces (NDF).

The Ithriyah-Khanasser road is a vital supply route of the Syrian forces located in Aleppo and an integral roadway that gives the latter access to several regions in northern Syria. It’s the second time in the recent months ISIS cut this supply route. This shows how vulnerable the SAA’s logistics in the region. According to reports, the SAA are going to launch a military operation to recapture Rasm Al-Nafal.

The SAA is continuing military operartions aganist ISIS along the Salamiyah-Raqqa Highway. Last weekend, the SAA and its allies liberated Al-Massbah, Point 4, Point 5, and a number of other small hilltops near the Zakiyah Crossroad located at the Hama-Raqqa border.

ISIS is widely using roadside bombs in order to slow down the loyalist forces’ advances along the road. Moreover, the strategic town of Zakiyah near the crossroad is still under the terrorists’ control. The SAA’s mid term goal in the area is to reach the Strayef Crossroad and launch an operation to liberate the Tabaqa Military Airport.