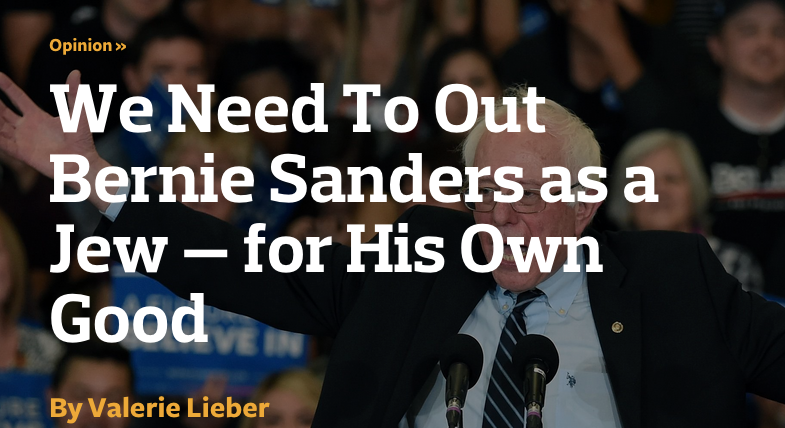 The headline above is not an anti Semitic rant delivered by a militant Jew hater. It was yesterday’s headline in the ultra kosher Jewish Forward. The Forward, once a Jewish socialist magazine, gave a spectacular demonstration of Jewish insularity.

The Magazine is troubled by the fact that “Sanders has downplayed his Jewish heritage almost to the point of renunciation.”  In his victory speech in the New Hampshire primary Sanders said, “I am the son of a Polish immigrant.”

According to the Forward, Sanders did not identify as “the son of a Jewish immigrant” or, even more simply, as a Jew. I guess that the Forward believes that Sanders can’t just be an assimilated American. They demand that he adhere to his Jewish roots and ‘his’ people. But why? Why are the Jews are so fearful of the American dream? Is not being a socialist in America Jewish enough for the Jews at Forward?

In The Wandering Who I elaborated extensively on the notion of Pre Traumatic Stress Disorder. I argued that while some people are truly tormented by a past event, Jewish culture facilitates a unique mental condition in which the Jewish subject is tormented by a phantasmic event set in the future. Jews are indoctrinated to think at least one holocaust ahead. And The Jewish Forward has provided exactly such a scenario.

“But as the nomination process continues, it is imperative that Sanders name this background often — because you better believe the Republicans and the conservative press will, if he gets the nomination.”   According to the Jewish outlet, Bernie better identify as a Jew before the anti-Semitic Republican Goyim decide to do it for him. They will be “using oblique and coded language in small-town newspapers, and using more direct language on conservative radio, his opponents will call into question both his loyalty to America and his fundamental Americanism.”

Hang on a minute, why shouldn’t the American people question the loyalty of any presidential candidate? The Jewish Forward predicts that Sanders’ success may call attention to some questions regarding Jewish loyalty to the empire. Why would a Jewish outlet be concerned with such a question? Is it because Rabbi Valerie Lieber, the author of the opinion piece, knows that Jewish loyalty to America is a legitimate issue?

Should we assume that the Rabbi knows that AIPAC, the Jewish American Lobby that dominates American foreign policy, is primarily loyal to Israel? Is the Rabbi concerned that many American Jewish youngsters fly to Israel to join the IDF rather than displaying their loyalty to the United States by joining the Marines and fighting the wars inflicted on America by the Lobby?

The Forward is not going to wait for Sanders to make his Jewish background into an issue. They call upon the tribe to do it for him.  “Rather than passively hoping that Sanders takes control of the narrative, we should all be speaking up about his Jewish heritage.” They simply ask all“To Out Bernie Sanders as a Jew.”

“In an ideal world,” according to the Forward, “Sanders’s Jewish identity wouldn’t be an issue for his campaign one way or another. But we do not live in an ideal world.”

Let me translate this Talmudic sophistry into English. In an ‘ideal Goyim-less world’ Sanders’ Jewishness wouldn’t be an issue. There wouldn’t be Goyim to challenge his Jewishness. But, unfortunately (unlike the Palestinians), the Goyim are here to stay.  However, Sanders is actually doing pretty well in spite of being a Jew. In the real world American youngsters are loving Sanders.

In the real world, a person can be an American first. In the real world Sanders may be nominated in spite of his Jewish origin. I guess that the Forward knows little about the real world; all they know is that in the Jewish tribal world the Jew is always primarily Jewish. They just can’t let Bernie be.

For the Forward socialist = Jewish.  So whether or not Bernie thinks of himself as a Jew, “his Republican opponents will. Their surrogates won’t stop at painting him as a New York socialist; even if he leaves out the word ‘Jew,’ they will not.”

But here is a Talmudic question to the Forward rabbinical board. If ‘New York Socialist’=Jewish why should Bernie Sanders declare himself Jewish twice?

In the crudest manner, the Rabbi ends his piece declaring: “Let’s begin to out Sanders as a Jew now, so that if the country is not ready for a Jewish president, he won’t win the nomination.” Obviously, American Jewish institutions do not want a Jew at the helm for the same reason their British brethren opposed Ed Miliband. The Jewish Lobby knows that it is much easier to squeeze a Zionist global conflict out of a Goy than to get a single M16 from a Jewish leader.