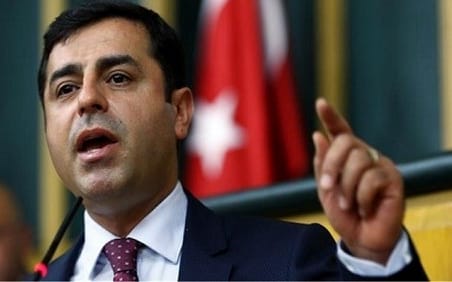 Demirtas was deflecting claims by the Turkish government that the Syrian Kurdish Democratic Union Party (PYD), which is affiliated to Turkey’s outlawed Kurdistan Workers’ Party (PKK) had attacked Turkey.

“What kind of an enmity against Kurds is this that they (AKP) await a bombing in some part of the country just to accuse the PYD?” he asked, while addressing his party’s deputies, the Hurriyet Daily News reported.

“Did the PYD throw a single stone at you from (Syria)?” he asked rhetorically. “I am not talking about bullets, but stones.”

Referring to AKP accusations that HDP is an extension of PKK, Demirtas said that the ruling party itself was a terrorist extension.

“Is there any better terror extension than you (AKP)? You are the extension of ISIS. And this is your hypocrisy. Our party keeps calling for peace as yours is doing all this and you expect us to remain silent,” he argued.

Turkey has been bombing the armed wing of the PYD, the Peoples Protection Units (YPG), in Syria in a bid to halt its offensive against armed groups in northwestern Syria.

Turkey’s President Recep Tayyip Erdogan, who is firmly backed by the AKP, has in the past dubbed both the HDP and the PYD as mere extensions of the PKK, which is banned in Turkey and is once again fighting a war against the Turkish state.

Demirtas condemned the government’s crackdown on the PKK in Cizre and the wider Kurdish-majority southeast and claimed their repressive actions have seen another 500 young people join the PKK.